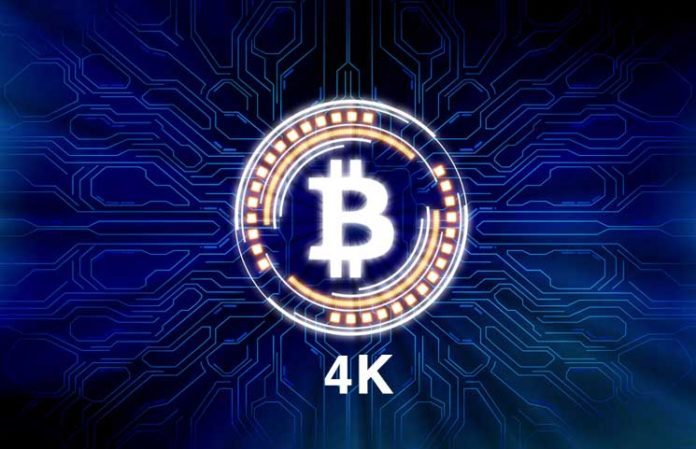 
As many of our readers probably already know, a new wave of bullish sentiment has helped Bitcoin rise above the $4K mark (earlier today). To further elaborate on the matter, it appears as though the price of the premier asset on Bitfinex has scaled up to an impressive $4,180 (thus jumping $250 in short order for a 7% gain).

Similarly, in terms of its overall market cap, BTC currently possesses a total monetary worth of around $5.5 billion.

According to respected market analyst ‘Chris Burniske’, BTC’s immediate future looks to be quite promising. In this regard, he recently sent out the following tweet:

The mainstream has almost entirely forgotten about #bitcoin again.

“I don’t say this to dishearten us. Quite the opposite. We remain in the “installation phase” of #crypto where the primary users are developers & investors. There is so much left to build and promise to be realized, which is massively exciting!”

Similarly, Burniske’s exact sentiments were echoed by Clem Chambers (CEO of ADVFN) who told a respected UK media outlet that he was expecting the price of Bitcoin to soar again this year.

However, Chambers was then quick to point out that he did not want to reignite FOMO with his latest assessment and thus requested investors to do their fair share of market research before investing in bitcoin.

“Bitcoin will boom again in a year and blockchain/cryptocurrencies and other applications will define the next 25 years in the same way as online/dotcom has defined the last 25. Bitcoin is the tip of the spear and the tip of the iceberg. In both cases you want to be at the right end of it and you don’t want to have the wrong positioning as it emerges.”

Lastly, it should be pointed out that Chambers is also the chief executive of ‘Online Blockchain’ — an establishment that is currently listed on the UK’s Alternative Investment Market as well as known for creating ‘plusone’, a highly popular social media utility token

Over the past year, many analysts expected the entry of institutional investors to give the crypto market some much needed impetus. In this regard, it is worth remembering that the initial fundraiser held by Bakkt (in 2018) was able to draw in a whopping $182.5 million from investors.

Similarly, Ciarán Hynes, MD of Boston-based Cosimo Ventures, is also looking to procure anywhere between $20-$30 million for his Cosimo X crypto fund which will invest in four- five tech startups in the near future.

Speaking with a respected online media outlet recently, Hynes was quoted as saying:

“Blockchain is disrupting and turning venture capital model on its head. The liquidity options from a security token venture fund is more attractive than what has been available under the traditional venture capital fund.”

Last but not least, it is worth remembering that ever since her appointment as the commissioner of the US SEC, Hester Peirce has repeatedly spoken-out in favour of the global crypto economy. Most notably, she recently drew the attention of the investment community at large when she presented her dissenting opinion on the decision of the SEC to reject a bitcoin ETF proposal from the Winklevoss Twins.

Peirce is a graduate of the Case Western Reserve University where her father also works as a Professor of Economics.

Why central bank digital currencies (CBDCs) are bullish for Bitcoin

What Bitcoin Has to Do with Your Retirement