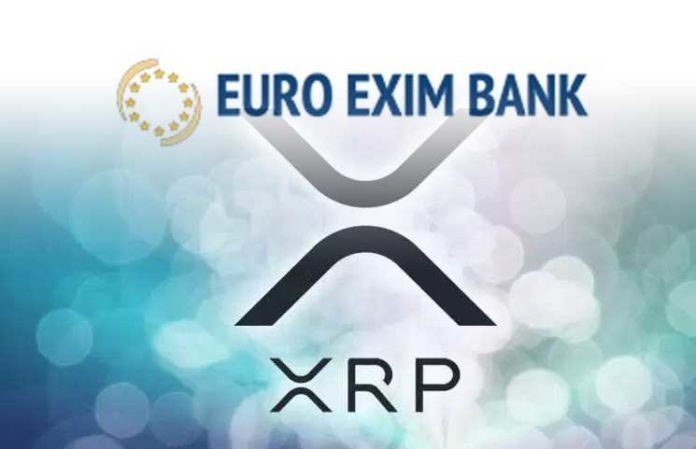 
Euro Exim has become the first official bank to use xRapid and embrace XRP to leverage the benefits of liquidity and transparency. Ripple has stated in the past that they have come into partnership with 200 banks but Euro Exim bank of London will become the first one to fully integrate the XRP-powered xRapid in the first quarter of this year.

Graham Bright, head of compliance and operations at the bank shared,

“There’s been a lot of talk around the markets about how blockchain technology can assist in trade finance. We’re interested in moving forward and creating a platform for payments for our clients who are in over 80 countries at the moment, making sure they have a smooth, frictionless way of paying local people.”

Euro Exim first became interested in Ripple in October last year when some of its executives were invited to the company’s Swell Conference in San Francisco.

“We realized the type of companies there were very forward thinking in the innovation they were putting in place. We saw the technology would let us easily and quickly originate payments without having bilateral relationships,”

“That visibility is so important.”

Banks Are Ready To Flip The Switch

As for why this change now? Bright shared that his bank sent a payment instruction to another bank across the Swift network that got

“lost somewhere in the quagmire of a central organization and we have no visibility on where it is.”

All the involved counterparty says

“We’ve not received your message.”

“almost desperate to make sure this can work.”

xRapid allows cross border payments in a matter of seconds by making use of XRP as the exchange currency.

“When you use XRP, instead of having to pre-park all your money in foreign accounts around the world, you hold your funds locally, under your control, your stability, your creditworthiness. It’s a much better position structurally,”

Well, this certainly raises the question of XRP’s legality which Bright considers as a digital currency that should be regulated by central banks as he commented,

“Regulation is welcome to bring it to the fore and to make sure it can be transacted like a regular currency.”

With over 200 banks already in its bag from all over the globe, Ripple is enjoying popularity as Brad Gralinhous, the CEO of Ripple recently said in an interview that many banks are ready to “flip the switch”,

“This is the year the wheat will be separated from the chaff. Not many months ago, the media was saying no one will use XRP, which made for good skeptical headlines. Today, you can’t say that as people are starting to use XRapid because it’s better, faster and cheaper.”