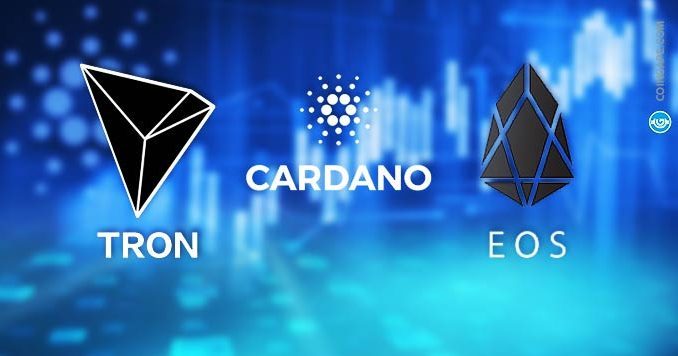 
Brock Pierce, the co-founder of crypto venture fund DNA, chairman of the Bitcoin Foundation and EOS backer, talks about the current state of crypto, including Bitcoin, Ethereum, EOS, Tron and Cardano.

Pierce told CNBC’s Crypto Trader that Ethereum needs to scale this year to remain a front runner in the industry.

“I don’t think the market’s going to wait, with all of these other call it ‘generation 3’ blockchains coming into the market. Ethereum is still the leading platform in the world for smart contracts. It has more developers building on it than anyone else.”

Brock says the smart contract competitor EOS is not going anywhere, and solutions to the platform’s RAM and CPU issues will emerge in February.

“For having only been around six months, it’s the number two chain in the world in terms of developers, rising rapidly. They’ve got the biggest war chest of anyone in the space, meaning they’re not going anywhere. They’ve got a lot of runway and they’ve got probably the most advanced chain today in terms of scalability.”

“Bancor and Liquid EOS have a scaling solution for EOS for the mainnet – a DApp layer that is going to solve all the RAM and CPU issues, I believe in February.”

“Tron is the third most popular chain with developers, which is the most important metric when assessing what’s going on with blockchains. Technology is open source, meaning technology does not differentiate you or give you any real advantage other than a first-mover advantage. Community is everything. They’re the number three chain today in that regard.

But clearly, you’ve got Cardano. Charles Hoskinson is a smart guy that’s been around for a long time. And many others.”

The crypto space is only getting more crowded, says Pierce. And in the long run, he thinks the leading crypto platforms of the future may still be unheard of.

“I think EOS was the Netscape of the ecosystem, solving scaling, latency and friction. But there are many other generation 3 chains coming into existence.”

Bitcoin ETF will not be automatically approved due to US government shutdown, says litigation attorney

Maybe Bitcoin Hardware Wallets Aren’t The Best Idea After All

How Web 3.0 Creates Value for Users, Not Platforms

MicroStrategy Could Buy More Bitcoin With $1...