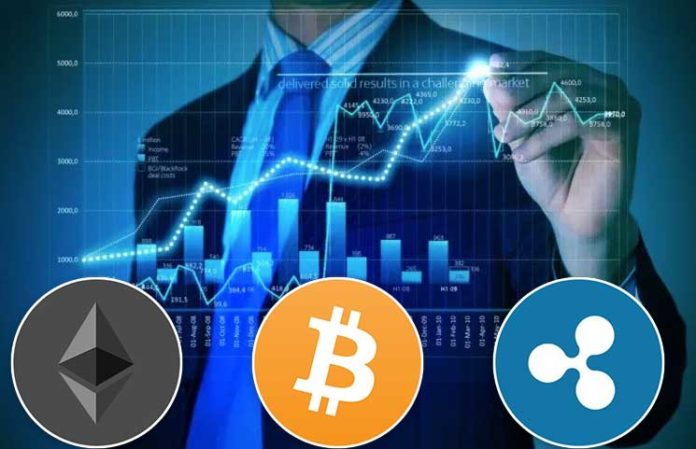 From Friday’s open when the price of Bitcoin was $3437 at the open, the price has increased by 10.6% measured to its highest spike at $3800 but since it has been consolidating and is currently sitting at $3687 which is an overall increase of 7.25%.

Looking at the 15-min chart we can see that the price of Bitcoin has gone above the 0.382 Fibonacci level and has interacted with the 0.5 Fibonacci level on Friday’s spike where it got rejected fast and the price went below the $3783 horizontal resistance level. The price started consolidating after the increase and made a falling wedge from which actually a breakout was made yesterday near today’s open on which the price was $3749 which was still lower than the 15 min candle close of the prior high.

Wave structure looks corrective so after this stagnation, I would be expecting a further increase as this would be the 4th wave out of the 5 wave impulse that started to the upside. The price target would be at least to the 0.5 Fibonacci level again but for a proper interaction but we might see it go even further up. Today we are most likely going to see a decrease at first since the third Minuette correction is to fully develop and it will most likely serve as a retest of support at around $3666 area.

There is another possibility in which the 5 wave impulse ended on the now labeled C wave of the second Minuette correction (orange), but this isn’t my primary count since the increase ended lower than the ending point of the 3rd wave. This scenario will be presented on Ethereum’s chart since it’s yesterday’s increase was slightly higher than the previous one.

As you can see from the 15-min chart the price fell from there as it entered the sellers’ territory above the 0.5 Fibonacci retracement level. Currently, the price is sitting at $124 and is in the upward trajectory but as indicated by the wick from the upside it has encountered sellers’ pressure and is likely heading for a retracement now.

My Elliott Wave count implies that the impulsive move the the upside has ended as I have counted all 5 waves. Yesterday’s increase ended higher than the one we have seen on Friday so you can see the similarities and the differences between its chart and the Bitcoin’s chart.

Ethereum’s chart implies that we are now going to see a retracement potentially back to around 0.382 Fibonacci level at $116 as now a correction will occur after an impulsive move.

As I am expecting to see the price of Ethereum higher than these current level the expected decrease would be a correctional move which would be the second wave of a higher degree impulse.

From there the price has decreased as it encountered resistance at the falling wedge resistance line and is currently sitting at $0.30797.

Looking at the hourly chart you can see that the price is trying to break out from the falling wedge as it has been interacting with its resistance line from Friday when the increase to it was made.

The price is currently sitting on the 200 MA which may serve as a support for a breakout but the cluster that is currently being formed around it hasn’t provided many indications on the potential direction. RSI is on its midpoint around 45% which again indicates neutrality.

If the Z wave of the Minor WXYXZ correction ended on the interaction with the horizontal support level at $0.29405 then we are seeing the start of the impulsive move that is set to lead the price above the territory of the falling wedge, but the Z wave might not have ended.

In that case, the increase that we have seen on Friday is the continuation of the second X wave, so if the price falls below the minor horizontal support line at $0.30144 (interrupted black line) then the second scenario would be more likely.

The 0 Fibonacci level is the beginning point of the first wave W of the Intermediate count so it would make sense if the price goes further down below it on the last corrective wave.

That scenario would look like on the chart below and as you can see the Friday’s increase was ending point of the second wave X out of the Minor WXYXZ correction and it was a three wave correction to the upside.

If this is true then the last Z wave to the downside has started and is going to be an impulsive move to the downside potentialy for another interaction with the falling wedge which would be at around $0.23562 before we see the start of the Intermediate Y wave.

From Friday’s open at $113.5 the price of Bitcoin Cash has increased by 14.24% to $129 at its highest point. As the price increased to the descending channels resistance line and encountered resistance there it has started pulling back and is currently sitting at $120.5

The price is now on the 200 MA where it is interacting with it for a support testing purposes so if the price find support there, we are likely going to see another move to the upside beyond the descending channels resistance and the first target I see for it would be at the horizontal resistance at $135.

As you can see in the case of Bitcoin Cash the Z wave has ended which is why the increase we have seen after that has five waves followed by a correction and now we are seeing the next 3rd wave of a higher degree ending its development.

Zooming out to the 4-hour chart you can see that my higher degree Minor count which would be the five wave impulse if the Z wave ended so now I would be expecting a breakout from the descending channel on the 3rd Minor wave and then a pullback to the descending channels resistance for a retest of support on the 4th and then another increase to $155 are.

Bitcoin price: That’s why the predictions are more bullish than ever

Bexplus Launches Bitcoin Wallet with up to 30% APY, 100% Deposit Bonus