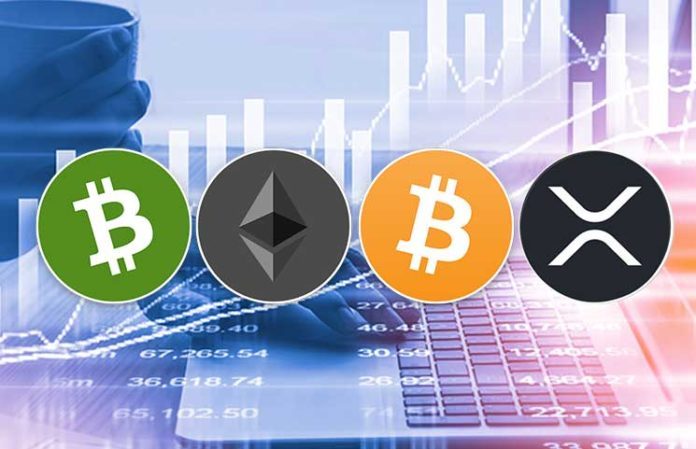 The price of Bitcoin is currently on the same level as on yesterday’s open as the price is currently sitting at $3680.

Looking at the hourly chart we can see that the price of Bitcoin has interacted again with the resistance line from the current descending channel in which it is correcting since the increase we have seen on last Friday.

The price is as I mentioned on the same level as on yesterday’s open and is above the 0.382 Fibonacci level which could mean that the buyers are attempting another breakout and that we could, in fact, see it today.

Wave structure implies that a move to the downside should be expected from here before we wee a breakout and if that is true than the most probable target for that decrease would be to around $3600 area or even lower to around the next horizontal resistance which is now most likely serving as support at $3553.

The more this stagnation is lasting the more I believe that it was only correctional. If this is true then we could have seen the prolongation of the Minor WXYXZ correction with the last Friday’s increase being the second wave X and after this consolidation ends an impulsive move to the downside would develop as it would be the start of the wave Z.

If this was a retracement before further increase we would have seen a quicker move to the upside but as this stagnation is lasting for quite some time it could very likely be consolidation and not a retracement.

From the depth of the expected down move, we are going to see which scenario turns out to be more likely as if the price doesn’t go below the $3553 are most likely seeing a breakout to the upside, but if it continues moving lower than the possibility of the price heading for another low would increase.

This is probably since the descending triangle is a lower degree pattern than the ascending channel in which all of this sideways movement is occurring after an increase we have seen last Friday.

As the price is in the upward trajectory and with the third correction ended we might see a breakout to the upside but I don’t believe that this current increase that led to a breakout is the start of the trend continues to the upside. More strong momentum is to be shown in order to take that into account so I believe that most likely we are to see another interaction with the ascending channel’s resistance line before finally, the price would collapse back at first to the channels support and then breaking it to the downside.


This is more likely because if the price is to continue moving to the upside impulsively as it did on last Friday we would see a move develop much quicker, and considering that the price is struggling to move either to the downside or to the upside the momentum will most likely get extinguished and the those who bought are going to turn into sellers which would increase the sellers’ momentum needed for a breakout to the downside.

If this occurs I would still be looking at it as a retracement before a trend continued until it would fell below $117 area where the most significant horizontal support is at the 0.382 Fibonacci level is.

The price of Ripple is like in the case of other cryptos very close to the level of yesterday’s open as not much has changed today for the evaluation of the cryptocurrency market. The price is currently being traded at $0.3095 which is only 0.36% higher than on yesterday’s open.

Looking at the 15-min chart you can see that I have slightly readjusted the projection from yesterday but it stayed the same in the context term. The price has broken out from the descending channel but this price action movement reminds me of the time when the price of Bitcoin was getting close to the apex of the descending triangle around $6500 level and everybody was expecting a strong breakout, but a breakout hasn’t occurred, but instead the price just moved out in a sideways manner.

This, in the end, resulted in a collapse of price and strong momentum to the downside was shown, which is what I believe would happen now but on a smaller scale as the price target for the expected decrease would be at the prior horizontal resistance now serving as support at around $0.3 area.

After the move to the downside ends and it retests the prior resistance for the support we are going to see what happens but my primary count is still implying that we are to see further increase at least to the $0.325.

Like in the case of other cryptos the price of Bitcoin Cash hasn’t changed much but the new hourly candles that were formed in the meantime indeed have.

Looking at the hourly chart you can see that I have outlined the similarities between Minute wave 2 and wave 4 which are both corrective in nature. I have been expecting a breakout to the upside but not before a retest of the wave 1 ending point or its vicinity but the higher degree Minor 1 wave ending point was interacted with which is why we might see an immediate breakout to the upside.

What was said in the case of other cryptos applies here as well – this stagnation could end in both ways but primarily I am expecting a trend continuation so more movement to the upside. This might not happen in a straight line as a pullback would occur as to establish support needed for the expected breakout and further trend continuation.

The current horizontal support level with whom the price has been interacting in the last few days may offer to provide the needed support so a breakout is also possible, but if the price goes below the horizontal level further price decrease would most likely happen and further lookout for support before the increase is to be made.

Not Bitcoin Price, This Time Bitcoin Blocks Hit its All-Time High at 1.3 MB

BITCOIN PULLBACKS AFTER HITTING $40K; WILL IT RESUME ITS RALLY?