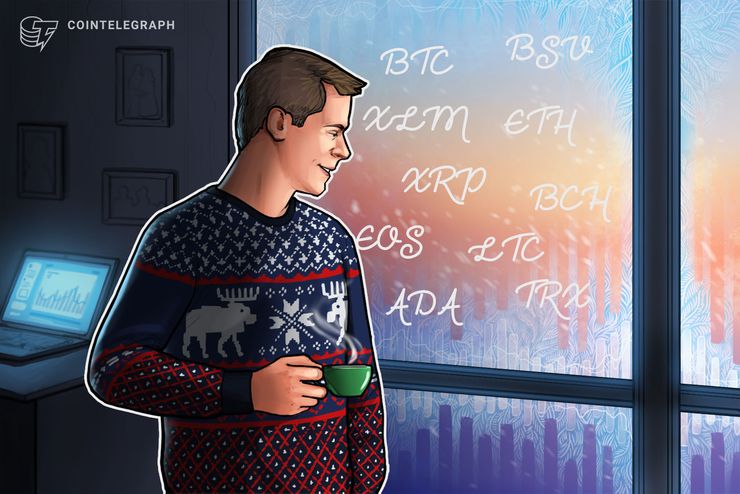 
The views and opinions expressed here are solely those of the author and do not necessarily reflect the views of Cointelegraph.com. Every investment and trading move involves risk, you should conduct your own research when making a decision.

The market data is provided by the HitBTC exchange.

Will 2019 be a year of recovery for cryptocurrencies? One of the important events to watch out for is the launch of International Exchange’s (ICE) crypto trading platform Bakkt. While the Chicago Board Options Exchange (CBOE) and the Chicago Mercantile Exchange (CME) currently offer Bitcoin futures trading, both of their products are settled in cash.

Many believe that futures physically delivered in actual bitcoins, as Bakkt plans to do it, will encourage the institutional involvement that has so far been largely elusive.

Another important point of attention are regulations. The Gemini cryptocurrency exchange,  led by the Winklevoss twins, has been calling for more clearly defined regulations for the industry, and has actually launched an ad campaign to promote that idea. However, some of the more die hard supporters of crypto don’t agree with Gemini’s idea.

In regards to a more widespread adoption of the blockchain technology, strategy and corporate finance consulting company McKinsey & Company believes that it is yet to prove itself an actual game changer.

We expect the industry to make enough progress this year, so as to attract the institutional money needed to move on to the next leg of the bull phase.

The tight range in Bitcoin was resolved to the upside on Jan. 6. Currently, the bulls are attempting to extend the pullback to $4,255. A break out of this level will complete an inverse head and shoulders pattern that has a target of $5,500. Therefore, we have retained the buy recommendation provided in the previous analysis.

If the price fails to climb above $4,255, the BTC/USD pair will attract short sellers. Any break of the immediate support of $3,550 can drag the price back to the lows. The downtrend will resume if the cryptocurrency makes a new yearly low.

The 20-day EMA is flat and the RSI is close to the midpoint. This points to a possible consolidation in the short term. The 50-day SMA, however, continues to point down, which suggests that the long-term trend is still down.

Ethereum has been trading close to $167.32 for the past five days. Though the bulls have failed to break out of the overhead resistance, one positive thing is that the price has not given up much ground.

The 20-day EMA is sloping up and the RSI has sustained above 50 levels for the past few days. This confirms that the bulls have the upper hand in the short term. The 50-day SMA is flat, which confirms that the long-term trend is also changing.

Ripple is trading in a descending channel. Both moving averages are flattening out and the RSI is close to the 50 level. This suggests a consolidation in the near term.

The XRP/USD pair has formed an inverse head and shoulders pattern that will complete on a breakout and close above $0.4. Such a move has a pattern target of $0.52205.

Therefore, we propose traders buy on a close (UTC time frame) above $0.4 with the stop loss at $0.33. On the upside, the upper bound of the descending channel might offer resistance; hence, traders should raise their stops to breakeven if the pair struggles at this level. It will turn negative below $0.33.

Though Bitcoin Cash broke out of the descending channel, it has not been able to move higher. For the past three days, the range has shrunk, and both moving averages have flattened out. The RSI is also close to neutral territory. This suggests a balance between the buyers and the sellers.

This tight range is likely to resolve on either side within the next few days. An upward break will carry the digital currency to $239 and above it to $307.01. On the other hand, a range expansion on the downside can pull it lower to $141 and below that to $100. We couldn’t find any clear buy setups on the BCH/USD pair, so we are not suggesting a trade in it.

The moving averages are on the verge of completing a bullish crossover, which suggests that the short-term trend is likely to turn in favor of the bulls.

The short-term trend in Stellar has become range bound, whereas the long-term trend still remains headed down. A break out of $0.13427050 will be a positive sign that can push the price to the next overhead resistance of $0.184.

However, if the bears fail to break out of the stiff overhead resistance, the coin might remain stuck in a tight range until it slides below $0.11024826. Below this level, the XLM/USD pair can retest the low of $0.09285498. We still can’t find any reliable buy setups; hence, we are not recommending a trade in the pair.

Litecoin completed an inverse head and shoulders pattern on Jan. 6. This has triggered our buy setup proposed in the previous analysis. The pair now has a pattern target of $49.756. If the bulls sustain above $47.246, the price can move up to $56.910.

The moving averages have completed a bullish crossover and the RSI is also in the positive territory. This is a bullish sign. Our positive view will be invalidated if the LTC/USD pair plunges below $27.701.

Bitcoin SV is not finding any interest from the buyers. It continues to languish in the tight range of $80.352–$102.58. This shows that the bulls are not keen to buy above the range and the bears are not willing to sell below it.

TRON reached our first target objective of $0.0246 on Jan. 6. The next target on the upside is $0.02815521. We expect this level to act as a strong resistance, so the traders can close 50 percent of their long trades at this level.

We are not proposing to close the complete positions, because a break out of $0.02815521 will start a new uptrend. The rising 20-day EMA and the RSI near the overbought level show that the demand exceeds supply in the short term.

The 50-day SMA is flattening out, which shows that the long-term trend in the TRX/USD pair is changing from down to up. Our bullish view will be invalidated if the bears defend $0.02815521 and plunge the digital currency below $0.0183.

Cardano completed an inverse head and shoulders pattern on Jan. 6, as it broke out and closed above the trendline. Traders who went long on our recommendation provided in the previous analysis can keep their stop loss at $0.036.

The pattern target of the breakout of the bullish inverse head and shoulders pattern is $0.066. However, if the ADA/USD pair struggles to break out of $0.060105, the traders can book partial profits at this level and raise the stops on the rest to breakeven.

The rising 20-day EMA and the bullish crossover suggest that the bulls have the upper hand in the near term.

The market data is provided by the HitBTC exchange. The charts for the analysis are provided by TradingView.

Institutions May Be Dropping Bitcoin for Gold As BTC Slips Below $40,000: JP Morgan