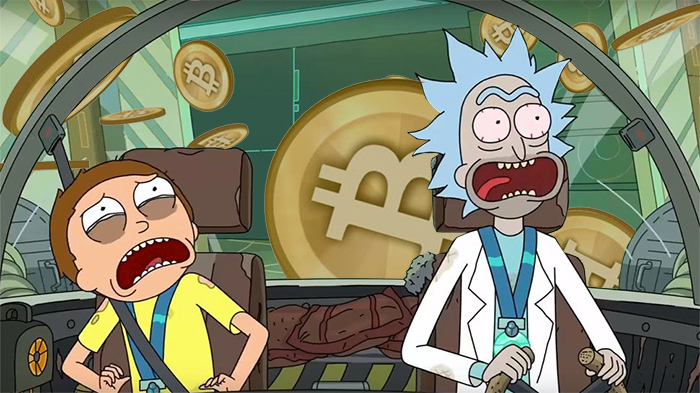 It was a week of disappointment for the bulls. In my view, the market was too much ahead of the facts, and although the price initially erupted upward from the ascending triangle last week, the 50 EMA was clearly a step too much. The fragile trust was not enough to break through this resistance and soon turned into a hefty sell-off. From a high just above $ 4,200, the price plummeted to around $ 3,700 on Bitfinex where we currently are. I have been writing for two weeks about a channel where the price of Bitcoin is in and although the course in recent weeks made a disappointing attempt to break this channel upwards, it is now about to leave this channel downwards. Figure 1 shows the daily graph of Bitcoin and although I was already skeptical about last week’s rally it looks bad at the moment and it seems that we are going to explore the bottom of the previous month and maybe even lower to go. 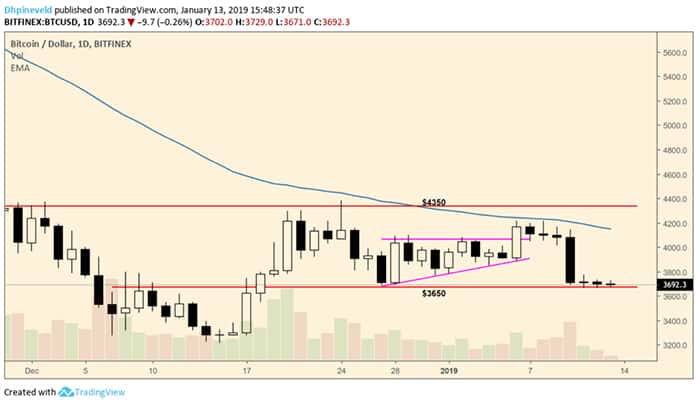 In the image above you can clearly see how the 50 EMA went like a true wall and called the fragile rally to a halt without any difficulty. Although the market showed small bullish signals in the short term, the reality is still that the bear market is in full swing. At the moment, a bear flag appears on the daily chart. A bear flag pattern is obviously a bearish pattern but also offers us a target. The length of the flag pole becomes for many traders a target for taking profits. The length of the current flag pole coincides with the low of last month around $ 3,250 and that makes it plausible for me that the price of Bitcoin will test this level again. A falling volume after last week’s sell-off is also a signal to me that a lot of bulls have died again and that the market at the moment has not the strength to fight back. There is of course something to be said that low volume also implies that there are few sellers, but experience shows that if there is no one who wants to buy, they eventually want to sell at any cost and thus the price drops.

The weekly chart does not look much better and there is even a bearish engulfing pattern to see. 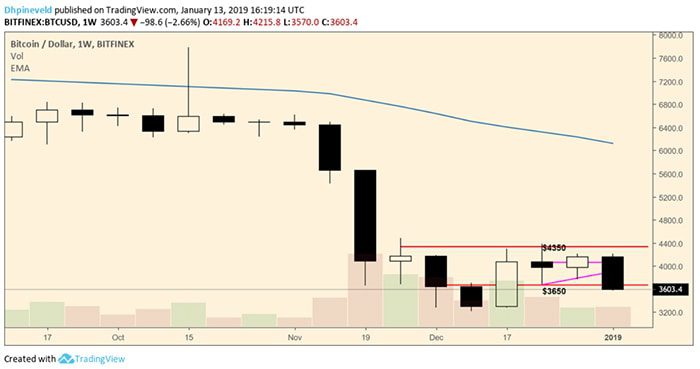 In addition, the momentum oscillators also seem to turn bearish again. As I write this, the course breaks down through the channel that I just described. Although the price of course can recover from this with a close above the $ 3,650 (the week is not over yet) the chances are very small that we come out good here. My eyes are focused on the level of $ 3,250 this week and I am especially curious to see if we are going to form a double-bottom or not. At this moment I still have no position open (neither long nor short) and do not plan to do so in the short term. In the coming period, I will mainly focus my energy on studying the market for finding a long-term hold entry. For the time being I do not see enough signals that convince me to go long on Bitcoin or some altcoins for the longer term, but the behavior of the course of the coming week will hopefully give us more insight into whether the current bear trend is declining or that sub -2k becomes a likely scenario.

Bitcoin is Going Global: Here’s the Top Countries Leading Crypto Adoption From Around the World