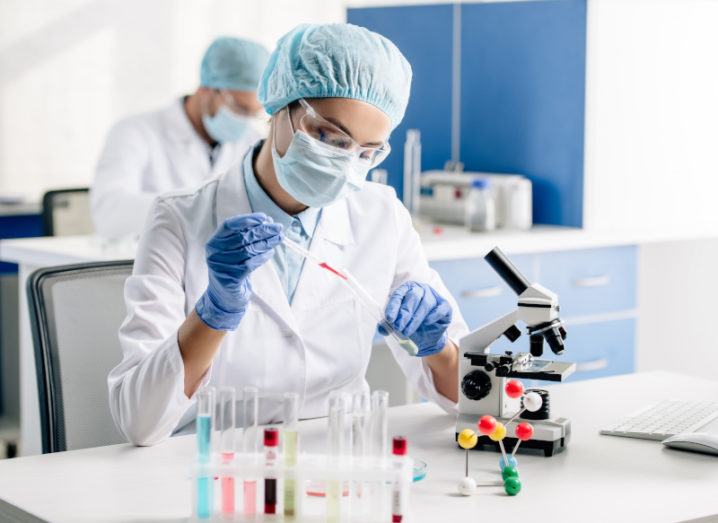 A quiet rebellion against copyright is being waged on a single website by a freelance coder, using cryptocurrency where PayPal won’t do.

Bitcoin as a censorship-free money has been used by outlaws of all sorts, but this time the outlaw is a young scientist from Kazakhstan breaking through the paywalls of academic journals.

Alexandra Elbakyan, a 31-year-old freelance coder, neurobiologist and phylologist, is running a database of over 80 million articles from academic journals that are normally available only through subscriptions. What started out of frustration when she was a graduate student became a free research service funded only through donations. For most people in the world, bitcoin is the only way to support Elbakyan’s work.

The website, called Sci-Hub, has been sued by two science publishing houses and reportedly investigated by the U.S. Department of Justice for possible espionage on behalf of Russian intelligence. (Elbakyan said she never got contacted by the U.S. authorities about it.) This effectively cut Elbakyan off the mainstream financial services in the West.

Elbakyan told CoinDesk the website sees about 600,000 visits each day. Even for those researchers who have access to subscriptions via universities, Sci-Hub turns out to be the most convenient option to get content for their research, she said.

But her struggles underscore one of the fundamental value propositions of cryptocurrency: When people can’t use the mainstream payment ralis, crypto offers an alternative. It’s hardly a bellwether of a broad adoption coming, but it is “a good example of bitcoin as a niche payments rail,” economist John Paul Koning told CoinDesk.

“For most purposes, people prefer to use regular fiat payments because they are easy,” said Koning, a CoinDesk columnist. “But when they get locked out, either because they are engaging in illegal activities or legal ones that are deemed socially unacceptable, bitcoin becomes an option. People who have been locked out of these conventional systems are slowly discovering that bitcoin can serve them.”

Elbakyan says bitcoin only constitutes a small part of all donations. Most often, it’s the online payment service Yandex.Money that is available in Russia and nearby countries including Ukraine, Belarus and Kazakhstan. However, for all the other parts of the world, crypto is the only direct way to support Sci-Hub.

Sometimes, that can be an issue. Still few people trust bitcoin, Elbakyan says, and some countries prohibit crypto, such as Bolivia and Ecuador.

“Somebody wrote to me recently saying that in his country only drug addicts use bitcoin, and asked if there were any other ways to donate,” Elbakyan said.

In 2018, University of Pennsylvania postdoctoral fellow Daniel Himmelstein and a group of other scholars found that Sci-Hub raised more than 94 bitcoin, worth about $900,000 at recent prices, before 2018. Speaking with CoinDesk, Elbakyan confirmed that the estimate was mostly fair.

The 2017 bitcoin rally was a good moment for her, Elbakyan says, as she could sell some bitcoin at a high price. But otherwise she’s nonchalant about all things blockchain and distributed tech. When asked if distributed file storage solutions currently in the works could be useful for Sci-Hub, she says the site works fine as it is.

Elbakyan’s clash with the publishing industry cost her the ability to use any U.S.-based services. In 2015, Dutch science publishing house Elsevier, a publisher of 2,500 science journals, including The Lancet and ScienceDirect, sued Sci-Hub for copyright infringement.

In 2017, a federal court, the U.S. Southern District Court of New York, sided with Elsevier and ruled Sci-Hub should stop operating and pay $15 million in damages. In a similar lawsuit, the American Chemistry Society won a case against Elbakyan and the right to demand another $4.8 million in damages.

In addition, both courts effectively prohibited any U.S. company from facilitating Sci-Hub’s work. Elbakyan had to migrate the website from its early .org domain, and the U.S.-based online payment services are no longer an option for her. She can no longer use Cloudflare, a service that protects websites from denial-of-service attacks, she said.

“When I opened a PayPal account, the donations would hit every minute. But after one day the wallet would get frozen,” Elbakyan said. She showed CoinDesk an email from PayPal in 2013, in which the company notified Elbakyan that Elsevier reported her for copyright infringement and she should either remove the violating materials from Sci-Hub or remove PayPal as a donation option.

“Payment processors are increasingly taking a keen interest in what their users are doing with their services; even going as far as banning political figures who they might disapprove of,” says Nic Carter, partner at Castle Island Ventures.

“In this world of politicized payment rails, the existence of a neutral alternative that treats everyone equally is a godsend,” Carter said, referring to bitcoin.

PayPal’s press office did not return CoinDesk’s request for comment by press time.

So now researchers in the U.S. who, just like Elbakyan, can’t afford costly subscriptions to access scientific content, can only thank her by using bitcoin. And they are using Sci-Hub, data shows.

Himmelstein found that Sci-Hub has been steadily growing in popularity since its inception in 2011, going from 185,243 downloads per day in February 2016 to 458,589 in 2017. The researchers found Sci-Hub usage has exceeded that of the University of Pennsylvania online library twentyfold.

As she was speaking to CoinDesk, 30 papers were being downloaded over the course of  three minutes, Elbakyan said, adding that during the busiest hours, there can be thousands of papers downloaded in the same amount of time.

“If you’re working from home, you need to access the university’s server first. And many people told me that they needed to click through multiple links and even then the paper wouldn’t open up – this is how clumsy the legal access is,” Elbakyan said.

She first got frustrated with the cost of academic knowledge as a student, working on her graduate paper, Elbakyan wrote in her autobiography on Sci-Hub. When she was a teenager she hacked websites for fun. When she was 16 she created a script allowing her to download books from the MIT CogNet website for free, despite the paywall, Elbakyan wrote.

Back then, she would rely on the network of researchers who would share papers they had access to via an online forum, she said in an interview with the website Newtonew. Then, she decided to create an automatically updating database of academic knowledge, which became Sci-Hub.

The website is using other researchers’ credentials for university proxy servers – Elbakyan won’t say how exactly she gets the credentials – and automatically downloading papers onto Sci-Hub’s server, where people can find them using a web address or unique identifier of a paper they need.

Elbakyan is maintaining the website alone, believing it’s the safest way. “If you have a team, it can fall apart at some point, or you might have a mole,” she said.

But while she doesn’t need more people working on Sci-Hub, she would love to see a widespread discussion about free access to academic knowledge, she says. A self-described Communist in her political views, Elbakyan believes the paywall policy of science publishing is a kind of censorship.

“I had a dream that Sci-Hub gets discussed by the U.N.,” Elbakyan said, referring to the United Nations. “For example, Russia could tell the U.S. that it’s a violation of human rights [to ban Sci-Hub] because the U.N. Declaration of Human Rights says everyone has the right to participate in scientific advancement. But that remained only a dream.”

Elbakyan says she hasn’t approached any political parties or government bodies, thinking they could pick up on the censorship argument if they were interested. She does not believe most people are interested in discussing freedom of knowledge.

“There is no real community to discuss that, you hardly hear such voices. Not just in the mainstream media, but even on YouTube, for example. It all died by 2013, when Aaron Swartz died,” she said, adding that even though many people are using her website or pirate websites such as torrent trackers, few care how and why they work.

“People don’t think about the [copyright] laws, about doing something about it or voting against it,” Elbakyan says. “When people reach out to me, they usually write to say ‘thank you’ or ask how to better donate.”

Sci-Hub’s standoff with the publishing industry is a good fight, Carter (who is also a CoinDesk columnist) believes. “The law and morality don’t always match up, and they certainly don’t in this case,” he said, adding:

“Sci-Hub has undeniably made the world a better place, and Alexandra has had to live as a pariah because of it. Funding her operations with bitcoin perfectly demonstrates its value proposition.”