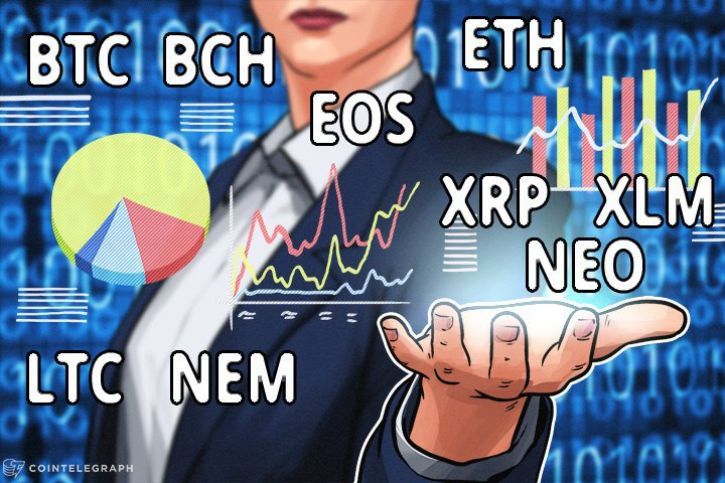 On yesterday’s open the price of Bitcoin was $3580. From there the price started increasing and has spiked up to $3801 at its highest point but it came back down and the hourly candles closed at $3770. Currently, the cryptocurrency is being traded at $3741 which is only 0.5% less than on today’s open as the price is in a minor retracement after the increase.

Looking at the hourly chart you can see that the price started retracing after the rejection at the 0.5 Fibonacci level. As the wave structure looks impulsive, I believe that the move to the upside has one more wave to go. That is why after the retracement I would expect the price of Bitcoin to go up to $3880 or even higher.

The retracement will most likely end on the 0.382 Fibonacci level, which would mean that the price could go further down to $3666 before increasing for another 5-6% measured to the $3880 level, but the price could increase further potentially all the way up to $3994.4 horizontal resistance before this move has ended.

Looking at the Elliott Wave labelings you can see that price is in the second stage X of the Minor WXY (orange), which means that if the X wave has ended on the Y wave of the Minute WXY (dark green), we are now seeing the start of the third Y wave impulsive move to the upside, which could push the price of Bitcoin higher than the previous high at $4367. But the Minute WXY might get prolonged by two more waves, which could mean that the current Minuette 12345 move to the upside is the second wave X and that another Z wave to the downside is to develop afterward.

On yesterday’s open the price of Ethereum was $116.1 which is the horizontal support level or the prior low or where the minor W wave ending point is. From there the price started increasing and it first came up to $120 and fell to $118.9 from where it spiked up to $134.51 at its highest point yesterday.

Since that high, another minor retracement has occurred and currently, the price is again in an upward trajectory and is sitting at $131.63 which is an overall increase of 13.45% measured from yesterday’s open.

On the hourly chart, you can see that the price has entered the territory of the prior range going past its resistance and the current retracement looks like it will fall back to the support line of that range retesting it for support.

The price came down today for interaction with the $127.53 level so we might see another increase soon as the I would be expecting that the price goes to the support line of the ascending channel which was broken out of previously which would be around $141.

According to my Elliott Wave count, the price has ended the Y wave from a Minor WXY (green) so if the correction isn’t prolonged by two more waves we are seeing the start of another impulsive move to the upside which would be the Y wave of a higher degree and could bring up the price of ETH up to $188.

If the correction gets prolonged by two more waves, this would be the second wave X of a Minor degree and would then result in further downside as the Z wave starts and could lead up to downfall to $104 before the start of the expected impulsive move in which case the target for the increase would be significantly lower.

The price of Ripple was at $0.3215 on yesterday’s open. From there we have seen like in the case of Bitcoin and Ethereum, at first a minor increase with a minor retracement and then another increase with stronger momentum to the upside when the price reached $0.348 at the highest point.

Since the high, the price has been pulling back steadily and is currently again in an upward trajectory sitting at $0.3383 which is an overall increase of 5.37% so far.

On the hourly chart, you can see that the price has spiked to the minor horizontal resistance level from the prior range and came back, closing the hourly candles below it. The price still hasn’t reached the lower level of the prior range. That is why I expect it to go a bit lower even though a minor interaction did happen before continuing its upward trajectory again. As the upward move looks impulsive I would expect another increase from here to the resistance line of the next range $0.35382 at least to $0.37 at max.

But when the increase ends I would be expecting to see more downside for the price of Ripple as the current move is most likely a corrective wave to the upside before a continuing for another downside move, which would be the end the Minor Y wave.

Yesterday the price of Bitcoin Cash was $124.2 at the open and from there it fell at first but not as much as it came down to $122.4 before spiking up like the other cryptos and came to $136.7 at its highest point yesterday.

From there the price started declining again as another minor retracement occurred and it looks like it has ended, as the price is once again in an upward trajectory and is currently sitting at $131 which is an overall increase of 5.13%.

On the hourly chart, you can see that the price has encountered the resistance at the prior range resistance which is why it has started pulling back. As the wave structure looks impulsive I believe that there is one more wave to the upside before another minor retracement but if the Intermediate X wave has ended the price of Bitcoin Cash is heading for another increase as we have seen before this last downtrend.

Projecting on the length of the Intermediate W wave on to the presumed X wave ending point we come up with the target price of $268. But like in the case of other cryptos that we have analyzed this increase that we are currently seeing could be the second wave X of the Minor correction and the X wave of a higher Intermediate count would end up much lower before we see the expected increase.

In that case, the target price for the Intermediate Y wave would be significantly lower as it depends on the ending point of the X wave.

Bitcoin Analyst Expects Prices To Drop Below $2,200 by April Based On Historical Movements