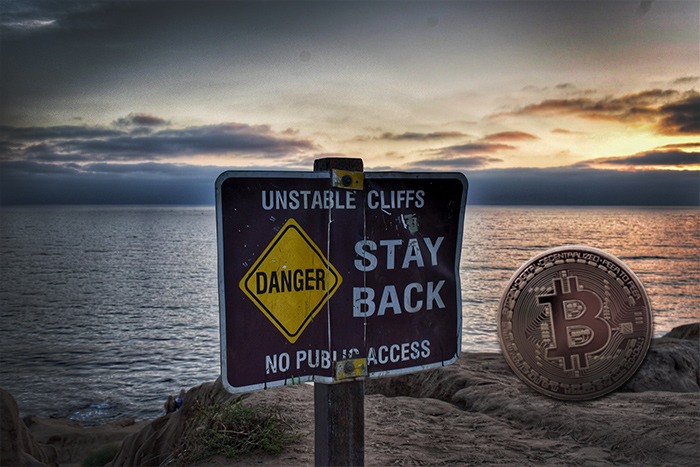 Last Thursday The market was shaken by a disturbing message about it Bitfinex where the New York court states that the cryptocurrency exchange Have lost $ 850 million and are trying to resolve this through a loan within the same group of iFinex with Tether. The market made a sharp dive in a short time where the rate just tapped $ 5,055 on Bitfinex. However, knew the rate recover quickly around $ 5,400 and the rate is currently even fluctuating around $ 5,500 on Bitfinex. The market “seems” hardly or not at all to respond to the developments of last week, while in my view the basis has been laid for a dangerous scenario in which the price can make a huge dip. Let’s see!

The image above clearly shows how the price recovered quickly after the bad news hit the market. After the initial drop up to $ 5,055 the rate quickly rose to a level of $ 5,525 and the rate has been fluctuating around this level ever since. Since the drop did not continue and the rate quickly returned, the market seems to think that last week’s news was another FUD (Fear, Uncertainty, and Doubt) is about Bitfinex and Tether and the first news items the rate is stabilizing are already doing the rounds. In my view, nothing is less true, because although there has been a lot of FUD about Bitfinex and Tether in the past, we are currently dealing with a different situation: namely the New York District Court and they are not just making a number of claims. as much as others would like to believe this. Or as Bitfinex writes: “The New York Attorney General’s court filings were written in bad faith and are riddled with false assertions” It stops once and the market thinks that too if you look closely at the rate, because the rate on Bitfinex trades with a premium for nearly $ 350! In my view, the only reason for this is that the Bitfinex users do everything they can to prevent them funds from Bitfinex and even be prepared to pay a premium of 6.5% for this! Indeed, there are signals in the market that fiat withdrawals have a delay with Bitfinex and then you see that people go to Tether. If you look at the rate on other exchanges, it becomes painfully visible how dangerous the situation is.

Figure 2 shows the daily chart of Bitcoin on Coinbase and there is no significant one on it rebound to see. Moreover. The rate seems to be one bear flag to form that can break down any moment. This is also characteristic of all other exchanges. Only Bitfinex shows a different pattern. At the same time, Bitfinex (Figure 1) also looks like one head and shoulders pattern. If we add that the price is close to a strong resistance, then it may become clear that the upside particularly limited in this case.

Nevertheless, one must be very careful with taking shorts. The amount of shorts has increased enormously on Bitfinex and that can of course lead to a considerable increase short squeeze and boost the course for a short time. The smart one traders however, at strategic levels around $ 5,600-5,900 will have sales orders to take advantage of this squeeze and position their shorts from this level. Volatility is incoming. Big time. So be careful not to get sucked into this and that badly placed stops will cost you dearly.

Over the past few weeks I have described several times that I do not expect that the price of bitcoin will just break the $ 6,000 limit and with the developments of last week the weather has become even worse in my view and the current low volatility can perhaps be considered as silence before the storm. The only way out that I see for the bulls is if we experience a short squeeze together with good news about Bitfinex, but this is an extremely risky trade. This situation is no longer tenable and we will have the answer within a few hours or days. As soon as we break through the $ 5,000, I expect a quick response because many stops may have been placed here.