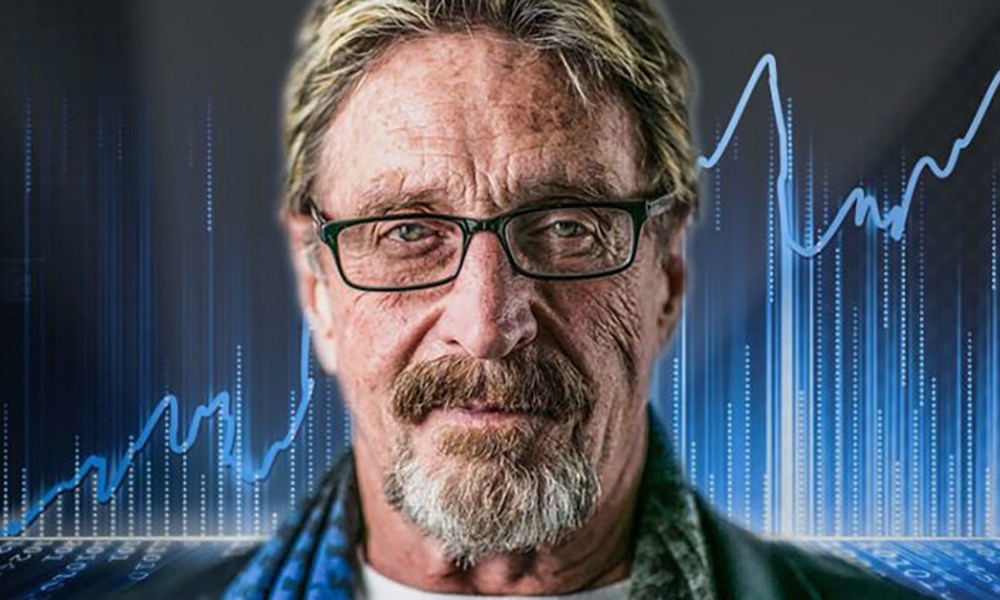 Is McAfee a Bygone Crypto Predictor. Or Is He Just Like the Others?

The bearish crypto market has significantly reduced interest in BTC. However, one man has endless stealth. It is not Spencer Bogart. Nor is it Mike Novogratz. They are dreaming too low. And John McAfee likes it big.

Once a voracious crypto enthusiast, McAfee has been flying under the radar lately. For a moment, it seemed like his big statements that BTC will be trading at $78,000, $500,000 or else are gone forever. Moreso, since Bitfi has not offered additional bounties to prospective hackers — and not one single assassination attempt has happened since the one in June.

Anyhow, against all odds, McAfee continues to promote the phantasmagoric idea, insisting that he has an impeccable track record of “perceiving the economic impact of new technologies is impeccable.”

About my prediction that Bitcoin will reach $1 mil before Dec 30th 2020; pic.twitter.com/4ubQcbnSC8


This statement is followed by a series of less comprehensible tweets describing the so-called “followless zone – no underfollows or overfollows.” And some cryptic hater on Twitter who does something as cryptic about these follows. However, McAfee promises that “We’re close to fixing it.” All in good time: a couple of days ago he also apparently fixed his perennially-growing genitalia after his wife lodged a complaint.

Back in October, Altcoin Buzz published “OPINION: Predicting and Predicting. Is it Time for Crypto Traders to Dive Deeper?” In it, I raised several issues most notably how some big names in the crypto industry have little to no idea what they are saying. The perception has not changed. Obviously, McAfee is a striking example of unfounded claims and megalomaniac arrogance. And yet, in all honesty, so are the others.

Take the most recent interview with Spencer Bogart, CEO of Blockchain Capital. During it, he made a blunt statement that “now is a good time to buy Bitcoin.” But why, Spencer? Would you have the courtesy to explain why right now? After all, Bogart said the same thing when BTC was trading at $8,000. And when BTC was trading at $6,600 he openly stated that BTC is close to bottoming. All without any profound explanation. What is even more disturbing is that in his latest interview he suddenly said that he is not even sure that the current BTC’s price is the market bottom. Concurrently, Novogratz, another fan of predictions, proclaimed BTC gold but — as usual — did not explain why.

Feeling frustrated? It is hard to blame you. If people working in this realm have a vague understanding of what is going on, then what are the others left with? Indeed, BTC’s price might increase — whether because of solutions like Fidelity or other. But let’s also be honest: Just because something is being institutionalized does not automatically turn it into a pool of diamonds and gold. The price might go up by 15-20%, might stay the same, other factors might kick in and drive it down once again. A lot of things will depend on how usable cryptocurrencies will become in real life, on a person-to-person level.

If BTC turns into the main means of payment, then McAfee’s prediction might not be that surrealistic after all. In the meanwhile, it is better to listen to fewer opinions, do more research and let go of unfounded predictions.

Bitcoin Price Forecast: Why BTC/USD Is Stalling Despite Reclaiming $11,600 Support?