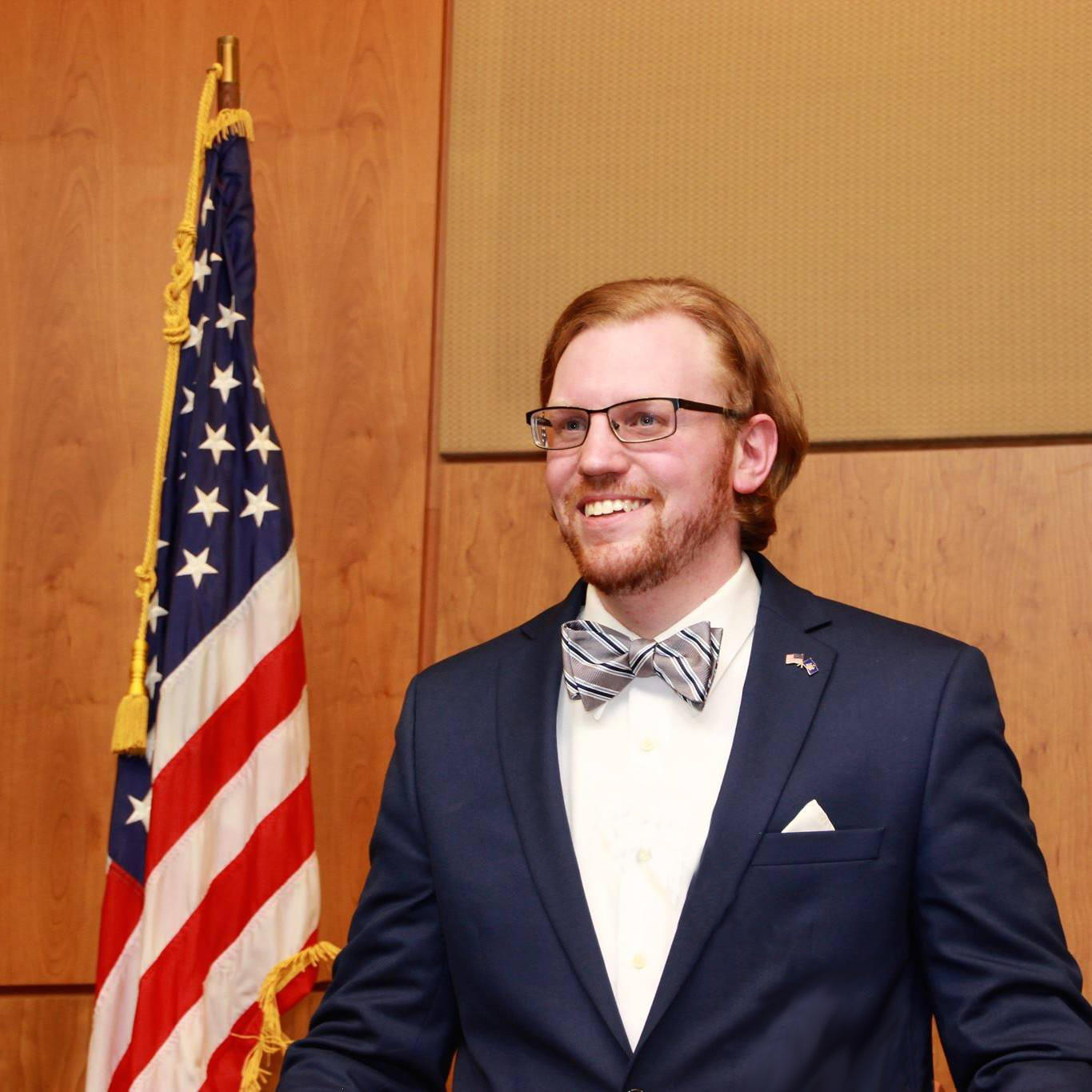 When Patrick Nelson first ran for public office he was 25, had already founded two nanobiotechnology startups and had a deep appreciation for bitcoin.

It’s that last point that gained him any media notoriety in what otherwise would have been a tame contest for a local seat of power in upstate New York.

“Bitcoin is well in line with the principles of federalism and checks and balances that underlie the American system of government. The blockchain and bitcoin are poised to do for the transfer of value what the internet did for the transfer of information,” he said in a 2016 Reddit AMA.

While he’s not – yet – accepting bitcoin for campaign contributions as part of his election run, as a Democrat, to the New York Senate in the 43rd District (which extends from Kingston past Albany) against incumbent Sen. Daphne Jordan, a Republican, crypto is still a core political and personal interest.

“Every time I try to get out, they pull me back in. I’m kidding of course but it feels like that sometimes,” Nelson said.

Last month, when the New York State Democratic primary was cancelled due to the coronavirus, Nelson spoke with party leaders to consider using a blockchain voting system to enable citizens to have a say in what delegates would be nominated.

CoinDesk spoke with Nelson, who currently serves as Trustee in the Village of Stillwater and a New York State Democratic Committee member, about his attempts to convince state party leadership to use blockchain infrastructure for internal voting as well as the inconveniences of accepting crypto for political donations.

The following conversation has been condensed and edited for clarity.

You’ve been pretty vocal about crypto as a political candidate. How do you think the industry has changed since your first run for office in 2015?

Well, I accepted bitcoin in my previous two campaigns – until BitPay stopped supporting that service – as a way to demonstrate that I was running a forward-thinking campaign and embracing new technologies. I was an investor, still am. I like the idea of a decentralized payment system for people to control their own money without necessarily having to use banks as intermediaries if people don’t want to. That’s my connection to the space.

I haven’t been too involved in it in recent years, but I have seen some interesting applications for blockchain technology in voting. For a second there, I actually thought there could be an application at the state level and the Board of Elections had, for a time, cancelled the Democratic primary in the state. One of the solutions I was bringing to leadership was an encrypted, remote voting system that could ensure “one person, one vote” using a blockchain system.

There was a lawsuit that put the Democratic primary in the State of New York back on the ballot for June 23, but there was a time when we still had to elect delegates for the party without a primary. I was looking to see if there was an appetite for using those systems to involve voters in the process.

Where did those conversations lead?

It probably wouldn’t have been the solution we would have used. We just voted by electronic device in the N.Y. Democratic party election – with the keypad thing that a lot of other organizations have used – and it took awhile for people to get comfortable with that.

There was an opportunity for something like blockchain, and I was intent on pursuing it even if it was an unlikely solution. But before that conversation could proceed, the court stepped in and set the primary back on the calendar. To be fair, I’m glad we’re voting the traditional way and won’t have to throw together some ad hoc system. But if we did have to throw something together, having a blockchain voting solution would have enabled a mass election that could have involved the voters, rather than having just the state committee members, to elect the delegates.

It probably would have fallen on deaf ears, but it would have started a conversation that could be useful down the line. The Democratic party apparatus is in a constant state of reform. I could see a blockchain voting system for the election of DNC (Democratic National Committee) members. These are quasi public/private offices that have large influence within the party organization, not the government, but still play a representative role in representing the State of New York in rulemaking, platform development for the national party. Blockchain could provide more transparency to that process.

ONE OF THE SOLUTIONS I WAS BRINGING TO LEADERSHIP WAS AN ENCRYPTED, REMOTE VOTING SYSTEM THAT COULD ENSURE ‘ONE PERSON, ONE VOTE’ USING A BLOCKCHAIN SYSTEM.

Looking at the Iowa caucus debacle, which could be attributed to the use of new technologies, how would you address the security and training concerns of blockchain voting? It’s an application that even people in the blockchain industry are skeptical about.

I’d love to hear some of the skepticism. That’s not something I’ve heard.

Okay, well, perhaps the largest startup working on a voting solution – Voatz – was reviewed by the Department of Homeland Security and MIT and found to have major security flaws.

Well, that would be concerning. The thing that I’m interested in is being able to use a public/private key issued to every voter to track if a person voted and only voted once, like solving the double-spend problem, and also encrypting the vote itself to ensure that a ballot is recorded without being assigned to an individual. I want to create a digital private ballot, but if it doesn’t work, it doesn’t work.

Instead of going through a startup, would you support the state itself developing this sort of technology?

Longer term, for public elections I’m still a fan of paper ballots, headcount backups, and machines that cannot be hacked. I think digitization of governmental elections has been an area of extreme concern among voters. There’s an opportunity for use of this technology for non-governmental elections, as a means of doing something like an election on a lower budget, working within a party structure.

Even the solution I mentioned before to elect delegates: It’s not something that would necessarily have been determinative by the vote, but it would have been good to have some sort of secure metric measuring the will of the state’s Democrats in that deciding process.

Bitcoin played a more prominent role in your previous campaigns for Town Board and even Congress. Is this something that you’re underplaying?

Let’s put it this way, when you’re running for Town Board, it was basically the only interesting thing to differentiate the candidates. During the congressional campaign, yes, we accepted it and talked about it. Actually, it was a flash point in a lot of debates. Not that you’re going to watch this, but I had got into a pretty heated debate about bitcoin mining in the City of Plattsburgh, because it was driving up the community’s power rates.

One of my competitors referred to bitcoin miners as parasites, and I was, like, “You should be careful about using that kind of language when talking about an emerging technology.”

That being said, there was a legitimate problem there because Plattsburgh had a power purchasing agreement, up to a certain level, at reduced cost. That reduced cost was what brought the miners there in the first place, but then the mining operations were eating through the purchase agreement, which was supposed to be enough for the city for months, and pushing the entire city into a higher tier billing bracket. Everyone having to pay a higher rate because of bitcoin mining is a legitimate concern. I just don’t think they should be called parasites.

Are you supportive of developing a crypto mining industry in New York State?

What were the compliance constraints around crypto donations?

I experienced the compliance of funding through bitcoin at both the state and federal level, and I have to say the federal government doesn’t seem to understand the process. They were trying to treat it like cash, so the contribution was subject to the same $100 cash limit.

I was, like, “No, no, no treat it like PayPal, or like Act Blue credit processing.” To remain in compliance, I had to book it as an in-kind contribution and then separately book the sale into fiat. For every contribution it was adding two entries of compliance instead of one.

It’s just a means of transferring value, but the [Federal Election Commission] got their heads tilted the wrong way. That goes to people generally misunderstanding what crypto is and what it isn’t.

On the state side, we always treated it like a payment processor and never ran into compliance issues. Last I checked, there was nothing in the state laws on the subject.

Is that why you’re not accepting bitcoin this time around?

My attitude, with the experience of the last two races, is, if we get folks who want to support the campaign in bitcoin, if there is demand for the service, we’ll look into providing that avenue. If there’s sufficient volume, we’ll facilitate it. Otherwise I’m not looking into right now. I put myself out there twice to support it, and it wasn’t a significant piece of what we were doing to justify the work we had to do on the compliance side.

You’ve mentioned in the past you would like to see New York’s BitLicense reformed.

I would like it to be as hands-off as possible, while still preventing fraud and mishandling. I don’t like unnecessary bureaucracy or compliance costs on the part of new businesses, or situations where people need to make friends with people in politics in order to build a business.

I would appreciate your readers reaching out to provide me with better information and provide perspective on this. I’m looking to represent  my constituents. So any bitcoin miners or crypto enthusiasts in the 43rd district should definitely reach out and I’ll take that information under advisement.

To underscore my philosophy. It’s like the [Securities and Exchange Commission’s] regulations show they clearly do not understand what they are dealing with in the way in which they choose to regulate it. When you have the situation of having regulators that don’t know how to regulate, and are putting crypto in categorical boxes, it can shut out innovation of technologies that don’t exist in those boxes.

What’s it like running a campaign during a pandemic?

Sometimes it feels like you’re not. So much of running for office is jumping around to events, knocking on doors and meeting people. A lot of the traditional signifiers that my brain would see and say, “Yes, I’m being a candidate now” aren’t present. We’re doing Zoom conferences with committees and activist groups and it has some of the same flavor, but it’s really just you sitting at a desk at home speaking into a microphone.