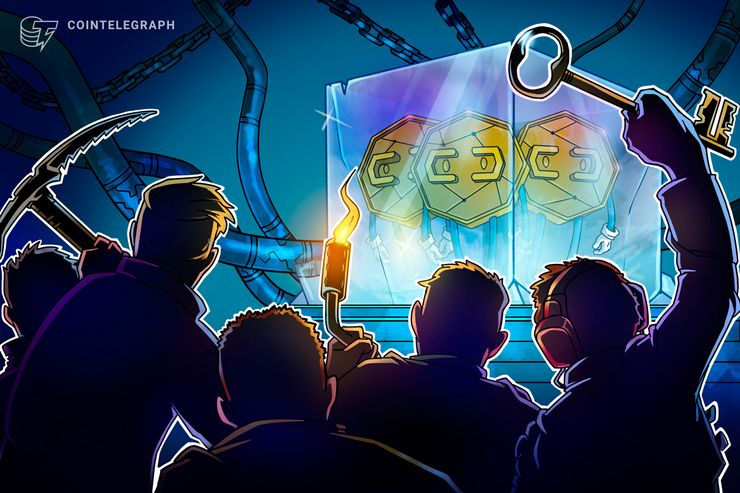 Proof of Keys Event May Highlight Centralization of Crypto, but Some of Its Claims Are Unfounded Bitcoin celebrated its 10th birthday on Jan. 3, and in commemoration of this milestone, the very first Proof of Keys event was held. Organized by crypto investor and podcast host Trace Mayer, it urged cryptocurrency traders to withdraw their holdings from crypto exchanges, in order to promote the decentralization and monetary independence on which Satoshi Nakamoto‘s vision for Bitcoin was founded.

However, as ostensibly positive as its message was, it was claimed on social media in the days leading up to the event that several exchanges — most notably HitBTC — had apparently been freezing accounts and preventing users from withdrawing their funds.

These are serious charges, but while they raise questions about who really owns the coins traded via big exchanges, the issue could be more complicated than HitBTC‘s detractors would have everyone believe. For one, exchanges have a record of halting withdrawals and freezing accounts as part of their normal business, so it’s not certain that HitBTC or any other exchange was specifically opposing Proof of Keys and trying to prevent a mass reclamation of Bitcoin. And secondly, it’s worth pointing out that Proof of Keys is not a grassroots, community-led event. Rather, it’s an initiative spearheaded by entrepreneur Trace Mayer, who happens to be an investor in Armory, a crypto wallet manufacturer that obviously has a financial interest in people taking their coins out of exchanges. As such, his claims of widespread account blockages should perhaps be treated with scepticism.

The suspicion that HitBTC was blocking accounts and withdrawals because of Proof of Keys emerged on Reddit and Twitter. On the HitBTC subreddit, most of the current posts have been made by users complaining that they’ve been unable to withdraw their crypto. On Jan. 1, for instance, Reddit user pedxs wrote that HitBTC is “now not allowing withdrawing, even for [my] accounts that passed KYC,” while other users have reported similar issues, in addition to claiming that the exchange is fraudulent in general.

Unsurprisingly, these reports have led to a vociferous reaction from those organizing and supportive of the Proof of Keys event. On Jan. 2, Trace Mayer noted on Twitter that a “friend” had been told by HitBTC that “Withdrawals are temporarily disabled on your account,” leading him to suggest that “@hitbtc failed #ProofOfKeys.”

Similarly, John McAfee — who also has a financial interest in a crypto wallet (Bitfi, which he was paid to endorse) — was quick to vent his spleen against the exchange. He wrote on Twitter:

I warned everyonw more than a dozen times. Don’t sign up. Don’t use it. Withdtaw your funds. I was trashed for calling out HitBT as a corrupt cimpany. Tough shit. You had six months warning from me to withdraw your funds. Do not ask me to help you now.https://t.co/Ls9mzpUSbz

Complicating the issue further, Trace Mayer also reported Proof of Keys “failures” at Coinbase, Poloniex, Bitfinex, and Purse.io (an escrow service and online marketplace, rather than an exchange). However, there really isn’t much online that would confirm widespread problems (at least not on the scale of HitBTC).

For example, in the Coinbase subreddit, there is currently one post from someone bemused as to why a 72-hour quarantine on withdrawals had been imposed on them, yet there is nothing else from the period before and after Proof of Keys that would suggest something unusual or untoward. Much the same goes for the Poloniex, Bitfinex and Purse.io subreddits, although in each of these it was hard to find even a single complaint (there was one gripe about a frozen Purse.io account, but this related more to an issue with an Amazon purchase than a specific withdrawal problem).

And in fact, when it comes to the original complaint, HitBTC has itself informed Cointelegraph that there is no link between Proof of Keys day and any account suspensions. It’s spokesperson, Peter Swen, stated that frozen withdrawals were the result of internal security measures related to KYC (Know Your Customer) and AML (Anti-Money Laundering) procedures.

“These temporary, safety-related withdrawal freezings are a direct consequence of our international KYC and AML measures. These rules exist and apply to us and everybody, 24 hours a day, 365 days of the year.”

A history of withdrawal issues

It is, therefore, hard to sustain a narrative that exchanges in general were deliberately subverting Proof of Keys or unable to deal with the sheer number of withdrawals (there’s also no evidence of just how popular the event was). And while it would seem from social media that HitBTC had a comparatively high number of blocked withdrawals, it is in fact hard to prove that it deliberately set about opposing the event. Not only is this because it’s explicitly denying a link, but also because it already had a less-than-perfect reputation when it comes to withdrawals.

For example, HitBTC has a three-out-five rating on Trustpilot, with 34 percent of its ratings being one star. Many of the negative reviewers (which date from months before Proof of Keys) have complained about being unable to withdraw funds, although HitBTC’s response to this review site reveal that they strenuously deny any such problem. Equally disconcerting, there are a number of negative reviews of the exchange on crypto news and reviews sites, such as 99Bitcoins and CoinSutra, with experienced reviewers on both sites making explicit reference to difficulties in withdrawing.

In other words, HitBTC has always had reported problems with withdrawals, so it seems unlikely that the problems reported now are the result of it trying to stymie Proof of Keys day. Rather, it’s likelier that withdrawal issues have moved more into the public eye as a result of the attention surrounding Proof of Keys, leading to the impression that there has been a sudden increase in account and withdrawal suspensions. The reviews above — many of which are many months old — suggest that there hasn’t been a significant increase, even if it would be possible to say that HitBTC has indeed “failed” Proof of Keys, i.e., in the narrow sense of failing to let at least some of its users withdraw their coins.

While HitBTC’s problems need to be highlighted, some of the spotlight should also be shined on Proof of Keys day. Its organizer — Trace Mayer — is a key investor in Armory, which, as stated above, provides an open-source cryptocurrency wallet. Back in 2013, it raised $600,000 in seed funding, with this funding being “led” by Mayer, according to a statement released by Armory Technologies at the time. He has, therefore, a significant stake in seeing wallets such as Armory succeed, something that would be possibly only if crypto traders and holders shook off their dependence on such exchanges as HitBTC (and Coinbase, Poloniex and Bitfinex).

And what would be a good way of encouraging people to abandon exchanges in favor of wallets like Armory? That’s right, you guessed it: some kind of event that piggybacks on the interest in Genesis Block Day and that effectively involves urging people to take their crypto out of exchanges and put it in Armory and other wallets. Indeed, it’s this motivation that gave birth to Proof of Keys, which, as a result, now emerges as a thinly disguised marketing event masquerading as a community-driven initiative.

And it’s in this context that Mayer’s recent attempts to tar Coinbase, Poloniex and Bitfinex with the same brush as HitBTC should be framed. Without having much in the way of evidence, his recent tweets have implied that these exchanges — which, due to their popularity, are symbolic of all centralized exchanges — have consciously blocked withdrawals, with the further implication being that they oppose their customers having ownership of their coins and having sovereignty over their money. Regardless of how true this claim is, Mayer would certainly benefit if it were widely believed, given his early investment in Armory.

Nonetheless, the Proof of Keys event raises an important question that has often been swept under the rug by the crypto community: Are centralized exchanges really compatible with decentralized currencies that, in theory at least, are meant to be novel and radical precisely because they promise to make big financial organizations obsolete?

“Centralised exchanges are anathema to the concept of peer-to-peer trading,” says Dr. Mervyn Maistry, the CEO and co-founder of Konfidio, a Berlin-based incubator for decentralized, blockchain-based platforms. “Like most centralisation, it can make investing more convenient. However centralised control also means the possibility of centralised corruption. Custodial exchanges are anything but secure, immutable or traceable.”

Of course, up until now the rise of crypto has been almost completely dependent on exchanges, without which Bitcoin would never have risen to $19,000 at the end of 2017.

Still, it’s likely that the existence of big crypto exchanges is introducing the kinds of price and market distortions that Bitcoin and other cryptos were meant to avoid.

To cite the most obvious example, research published in June by the University of Texas found that 50 percent of Bitcoin’s 2017 price rise was a result of trade manipulations, which took place on the Bitfinex exchange and that made use of the Tether stablecoin. Given that such manipulation was also responsible for 64 percent of the rise of other major cryptocurrencies, this research offers a stark insight into how exchanges — because they have so much power over markets — can distort the price of Bitcoin and other tokens, even though these were created with the aim of avoiding distortions. Maistry adds, speaking to Cointelegraph via email:

“In the the unregulated space of crypto exchanges there is a 100 % certainty of corruption. This is exactly the same as centralised stock exchanges in the traditional world, there is a 100 percent certainty that somewhere, someone is engaging in corrupt practices.”

There have been allegations that other major exchanges have manipulated crypto markets, and while such allegations are unproven, they join with Proof of Keys day in highlighting the often opaque nature of crypto exchanges, and of the arguable need for cryptocurrency holders to become more independent in how they manage and trade their coins. With the gradual emergence of atomic swaps and decentralized exchanges, such independence is set to become increasingly possible in the future. But for now, it seems that centralized exchanges will remain popular, even with such events as Proof of Keys urging us to ditch them.

Trace Mayer has been asked for comment but has not responded as of press time.

Father of Podcasting Integrates Bitcoin Lightning Into His App

Bitcoin Breaks To New 2020 High on PayPal News: This Was The Weekly Crypto Market Update