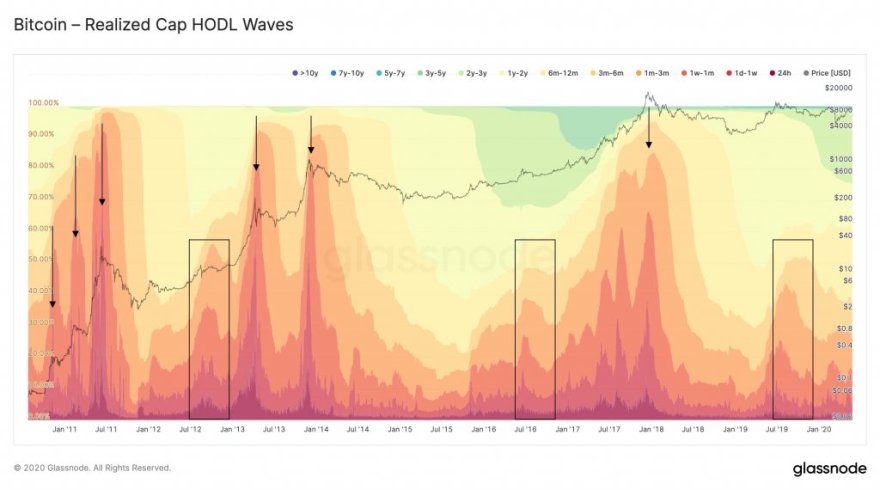 Bitcoin’s price action as of late has been rather lackluster, with the benchmark cryptocurrency struggling to garner any decisive momentum following its recent series of rejections at $10,000.

Despite there being a sense of gloom amongst analysts with regards to where BTC may trend in the days and weeks ahead, one on-chain trend seems to suggest that a large parabolic uptrend could be just around the corner.

This can be clearly seen while looking towards Bitcoin’s “HODL wave” indicator from analytics firm Glassnode, which weighs UTXOs against their creation price to give insight into the strength of trends.

If history repeats itself, this indicator suggests Bitcoin could be moving into firm bull territory.

Bitcoin’s price action seen throughout the first part of the year did appear to mark the early stages of a macro uptrend, but the crypto’s consistent inability to break above $10,000 appears to have put an end to this possibility for now.

The weakness stemming from these rejections may not last for long, however, as data regarding the creation price of Bitcoin’s Unspent Output from Bitcoin Transactions (UTXOs) seems to indicate that the crypto could be entering bull territory.

Glassnode uses this metric to drive their “HODL Waves” indicator, which has forecasted both the starts and ends of previous parabolic rallies. They spoke about this in a recent post, saying:

“Realized Cap HODL Waves – Instead of using Bitcoin supply by age, UTXOs in each band are weighted by their creation price. The resulting realized cap age bands help navigate BTC cycles, gauge market tops, and the start of bull markets.”

As indicated by the black boxes on the above chart, Bitcoin is currently flashing a similar UTXO trend similar to that seen before previous parabolic uptrends.

It is unclear as to just how far reaching Bitcoin’s next bull run will be, as the market is a lot larger now than it was in years past, meaning that it would require significantly greater sums of capital to fuel any type of massive upwards movement.

There is one popular economic model – called the Stock-to-Flow Cross Asset Model (S2FX) – which suggests that Bitcoin could be trading as high as $288,000 in the coming few years.

This model is controversial, however, and a CryptoSlate report from April showed that the S2F model’s potential bullishness is pinned on the assumption that investors are not actively pricing in the supply impacts of Bitcoin’s recent mining rewards halving.

Ethereum is Flashing Signs That a Sizable Bull Run is Looming

Is the cryptocurrency market ready for mid-term growth?