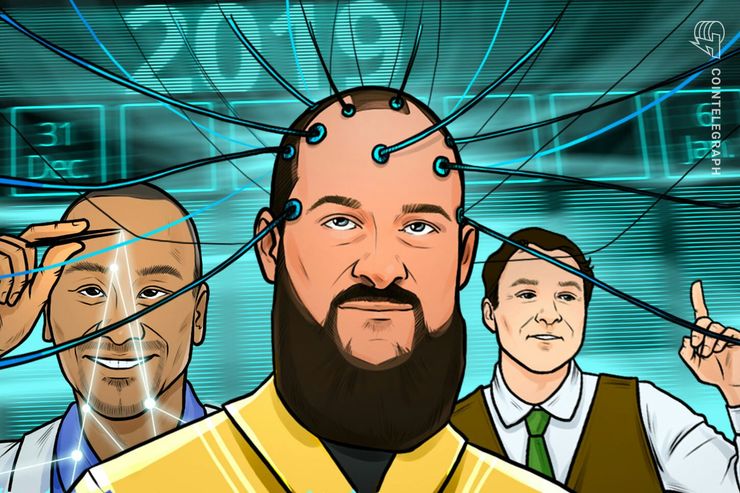 Republican state senator of Georgia has reported to jail in the United States for allegedly lying about the theft of cryptocurrency mining equipment worth around $300,000. State senator Michael Williams had disclosed the theft in May, and is reporting to jail now over his false police reports and statement. Williams had declared that a server that was used to mine unnamed cryptocurrencies had disappeared from his office premises, but last month was indicted by grand jury on three counts.

Bakkt, the digital assets platform created by the operator of the New York Stock Exchange (NYSE), announced the completion of its first funding round this week, having official raised $182.5 million from 12 partners and investors. Those who participated in the round reportedly include ICE, Boston Consulting Group, Galaxy Digital, Goldfinch Partners, Alan Howard, Horizons Ventures, Microsoft’s venture capital arm and Pantera Capital. Bakkt also noted in their announcement that they are working with U.S. regulators to obtain approval for their physically delivered and warehoused Bitcoin (BTC).

The Iranian government this week declared that messaging app Telegram’s cryptocurrency development is a threat to national security. Javad Javidnia, the secretary of the country’s Criminal Content Definition Task Force, said that any cooperation with the app’s plans to launch its Gram token will be considered an act against national security and a disruption to the national economy. The country had first banned the messaging app in April, after criticizing its initial coin offering (ICO) for having the potential to undermine the national currency of Iran. 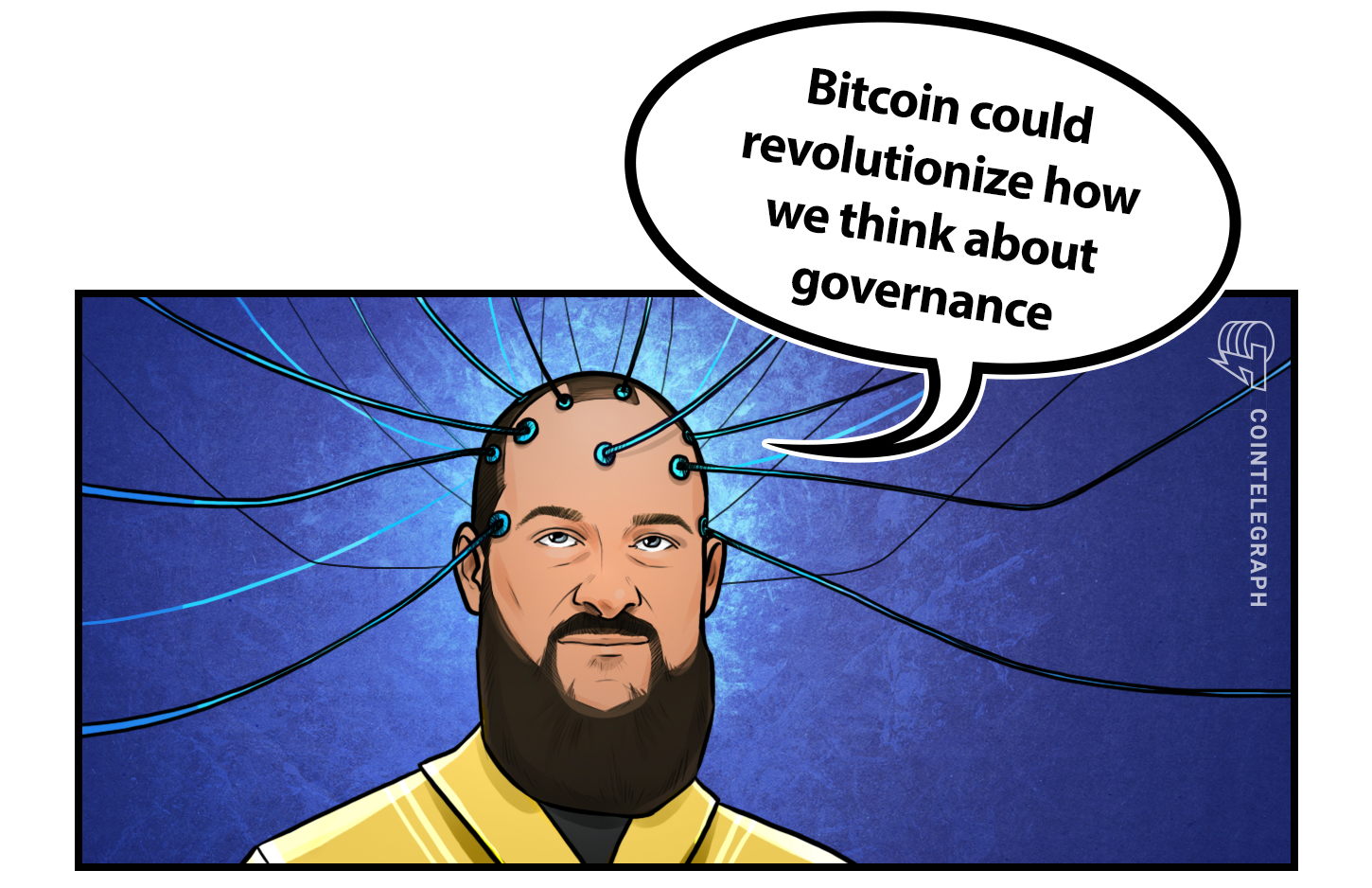 The merchandise store for the online video game Fortnite, Retail Row, has started exclusively accepting Monero (XMR) as a cryptocurrency payment option. Fortnite has a reported 125 million players globally, was released in July 2017 and developed by Epic Games. In October 2018, Epic Game was valued at more than $15 billion in its most recent funding round. Specifically, Retail Row supports crypto payments service GloBee, which includes Bitcoin, Litecoin (LTC) and Ripple (XRP) support as well as Monero, even if the Fortnite store will only support Monero.

At the end of the year, an analysis of the number of times that Bitcoin has been reported as dead in the media has totalled 90. According to data from 99bitcoins, the coin’s death has been reported by world media almost 100 times from December 2017 to December 2018. In contrast, a site that tracks the “death” of altcoins contains around 1,000 entries at the end of the year. The database distinguishes assets that failed due to hacks, scams, or were parody coins without a sincere purpose. The total number of cryptocurrencies with a measurable market cap is now over 2,000, according to CoinMarketCap. 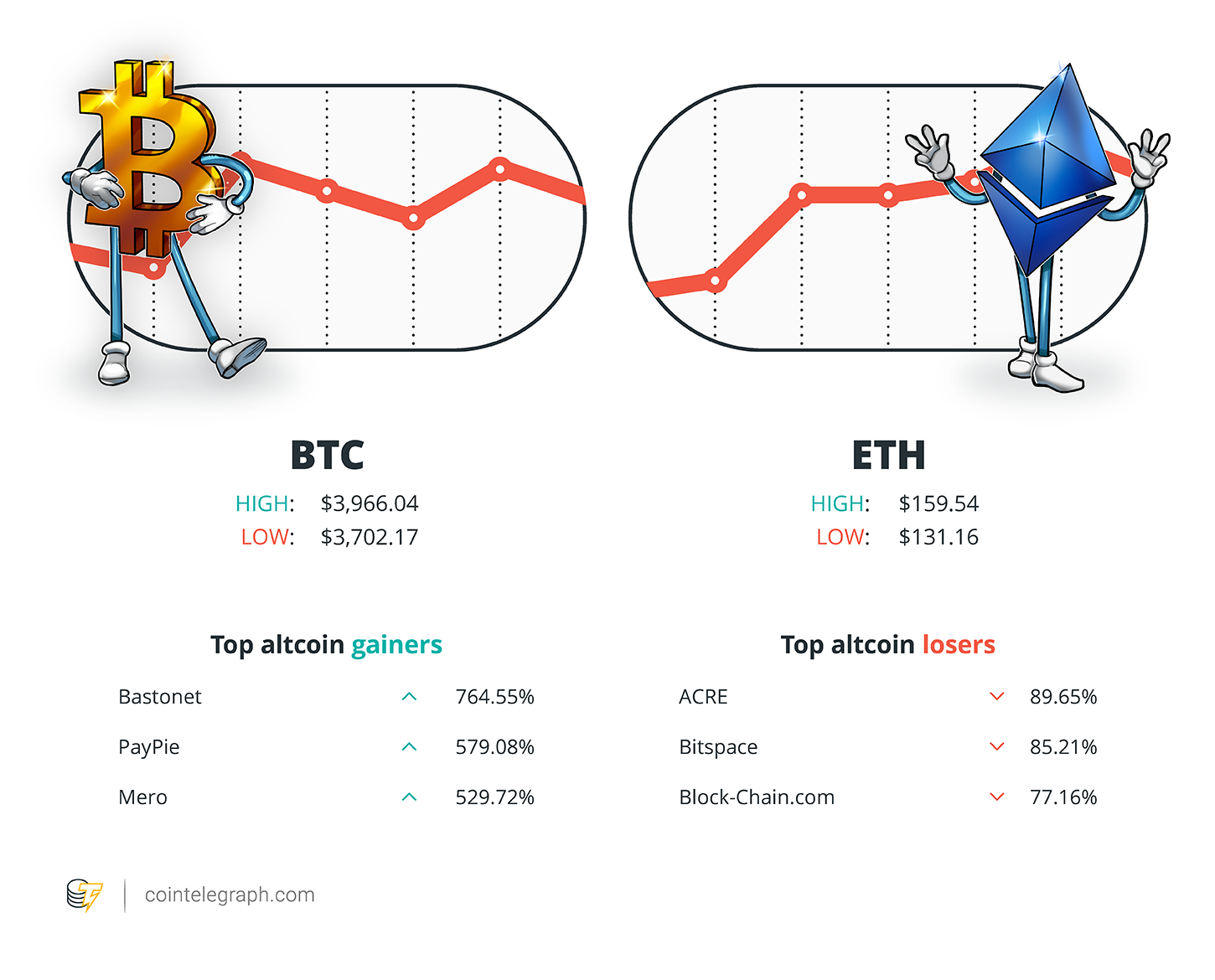 For more info on crypto prices, make sure to read Cointelegraph’s market analysis.

“It doesn’t need to be the bitcoin blockchain, but if it’s not a public chain, then you’re missing the point,”  — Jed McCaleb, Stellar’s co-founder and CTO

“Bitcoin is different because Bitcoin is decentralized. The advantages of decentralization are often subtle and easy to dismiss, but they are real benefits,” — Jimmy Song, Bitcoin developer

“I believe that Bitcoin is a very interesting experiment that if is successful in the long run could not only revolutionize money, but revolutionize how we think about governance,”  — Jameson Lopp, cypherpunk 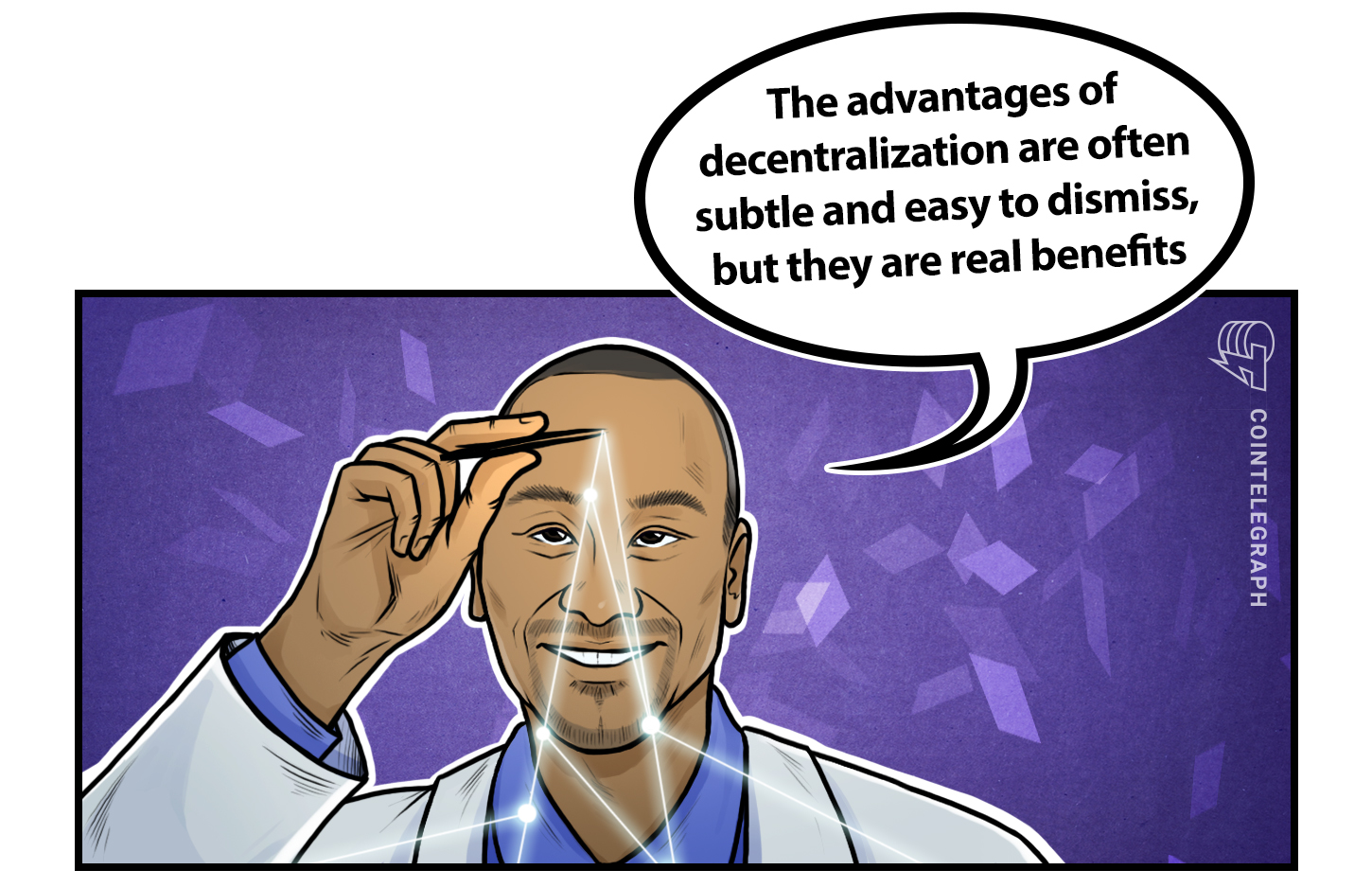 “The area I am most concerned about are actions brought by misguided regulators who will take aim at high quality projects and harm them. And we will continue to see all sorts of failures, from scams, hacks, failed projects, and losing investments be a drag on the sector,”  — Fred Wilson, venture capital investor

“Withdtaw [sic] your funds. I was trashed for calling out HitBT [sic] as a corrupt cimpany [sic]. Tough sh*t. You had six months warning from me to withdraw your funds. Do not ask me to help you now,” — John McAfee, tweeting about rumors that HitBTC was blocking user withdrawals

FUD of the Week

According to a tweet from Gab.com, Coinbase has allegedly banned the personal account of Gab’s founder, Andrew Torba. Gab.com’s business account on Coinbase had already been reportedly closed in December. Gab.com, a social media space that touts itself as a space for free speech, has in the past been linked to right-wing extremism, as it gives a platform to those who have been banned from other social media services. After Gab was used to post a final message before the Pittsburgh shooter attacked a synagogue, Torb had stated that the shooter did not represent the broader user base.

The Republic of Abkhazia’s government has cut power to several cryptocurrency mining farms due to concern over electricity use. According to an announcement from state electric utility Chernomorenergo RUE, the utility has cut power to 15 facilities with a total capacity of 8,950 kilowatt-hours (kWh), reportedly equivalent to the electricity consumption of 1,800 households. The utility noted that the power cuts were temporary measures, and that the owners of the mining farms were willing to cooperate with the utility moving forward. 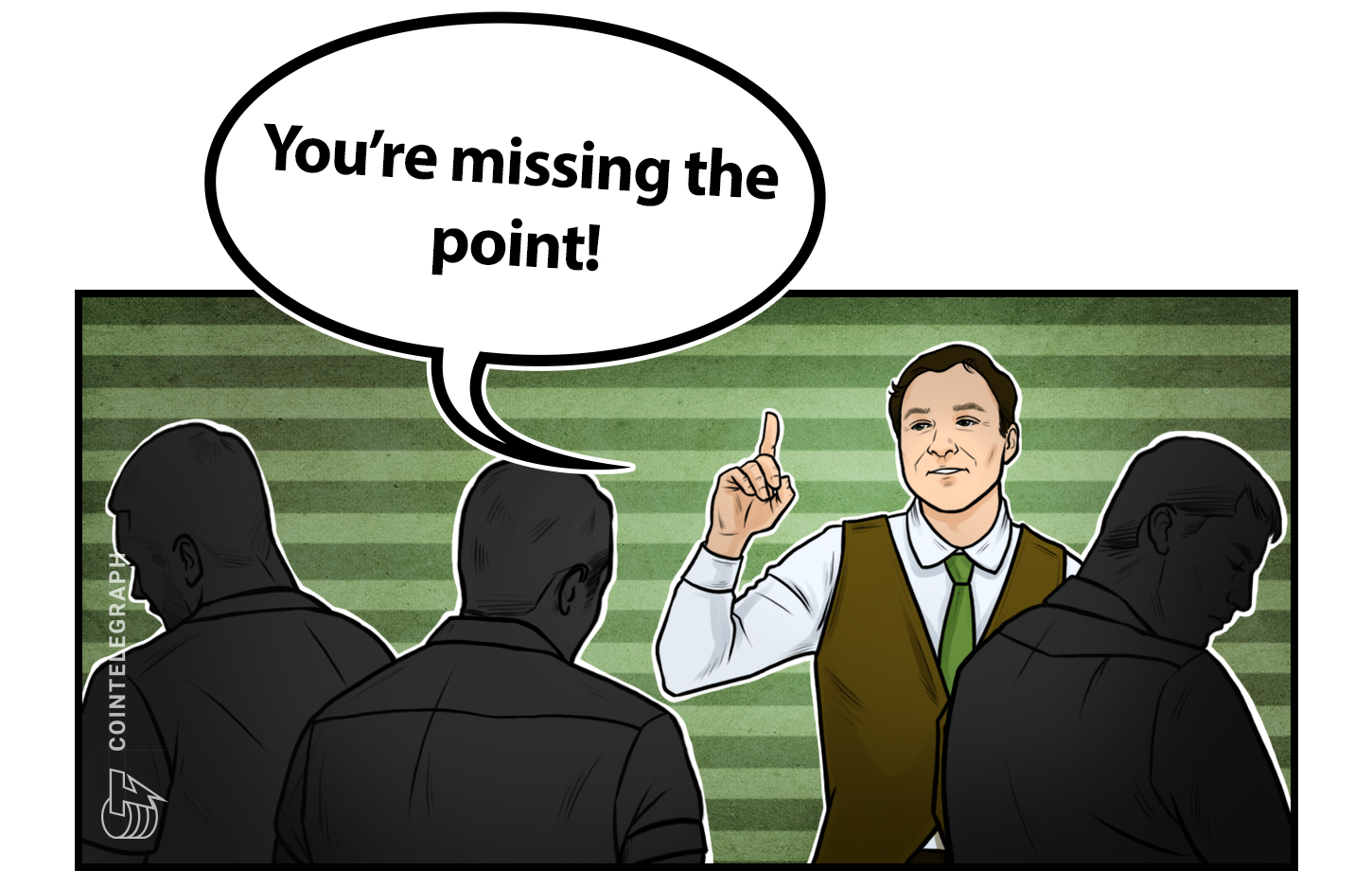 Police in the Indian state of Jammu and Kashmir have issued a statement to the public this week, warning against investments in cryptocurrencies. According to the statement, the police noted the heightened risk of investments like Bitcoin and reminded the Indian public that the government does not sanction cryptocurrencies. The inspector general further noted that the cryptocurrency market could be prone to a sudden crash, that would expose retail customers to significant financial loss.

DMM.com, a Japanese e-commerce conglomerate, will close down its cryptocurrency mining businesses, citing the deteriorating profitability in the sector. The company noted that the decision to shut down its crypto mining part was made in September 2018, and the initial steps at dismantling the operations and selling the hardware will reportedly extend over the first half of 2019. DMM.com first entered the crypto mining business in September 2017, focusing on mining Bitcoin, Ethereum and Litecoin.

From Dorian Nakamoto to Elon Musk: The Incomplete List of People Speculated to Be Satoshi Nakamoto

Since the fabled Satoshi Nakamoto continues to stay stubbornly silent, the number of Nakamoto pretenders continues to increase. Cointelegraph delves into the various possible identities of the Bitcoin creator over the past 10 years.

Bitcoin vs. Traditional Assets: How Does Crypto’s 10-Year Performance Sync Up?

As Bitcoin celebrated its 10th birthday, Cointelegraph looked at the correlation between the top cryptocurrency’s performance and that of more traditional assets such as gold, oil or technology stocks.

Bitcoin and Ethereum Positive Catalysts to Watch Out for in 2022: IntoTheBlock