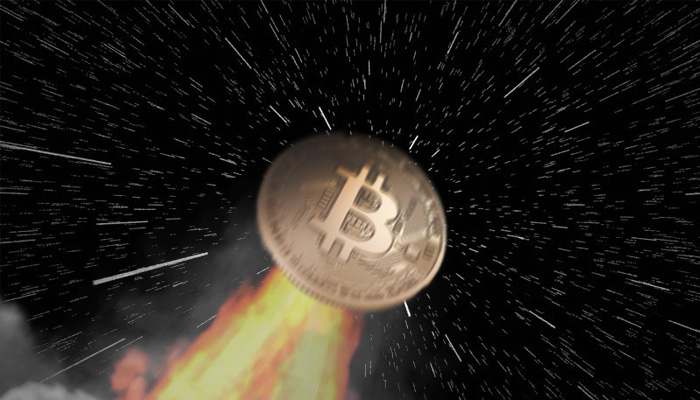 This morning we suddenly saw a huge green candle on the bitcoin (BTC) chart. The largest cryptocurrency based on market capitalization has now risen in value by as much as 15.4% within a few hours. It thus achieved a new high for 2019 with a value of $ 5,100. It was not entirely unexpected that bitcoin would rise again, although the way it happened was a surprise to many. What has caused this sudden peak?
Technical analysis

The most likely cause is that bitcoin has broken the major resistance level at $ 4,200. Since this price level has been monitored by investors for a long time, breaking it may have been the spark that caused this explosion.

A large part of the investments in BTC are made almost automatically, and many investors also place orders at a certain price level based on technical patterns and indicators. For days, if not weeks, bitcoin struggled with the resistance at $ 4,200. It is therefore likely that many orders were open for the price level just above $ 4,200. It is also likely that many short positions (positions that benefit from a falling BTC price) were closed just above this level to prevent further losses.
Matti Greenspan, senior market analyst at eToro, said:

Bitcoin’s breakthrough this morning above $ 4,200 was crucial because the market had been looking at that level for a while. Many entry orders and stop losses were undoubtedly positioned just above this price level.

Other possible causes for the explosive price increase are a number of “Fake news” messages that have been circulating since yesterday. We should of course not forget that it was April 1 yesterday, and bitcoin investors were not spared.
For example, one of the news reports that one of the world’s most successful investors, Warren Buffet, would diversify his portfolio. He would do this with bitcoin, among other things. So positive news! But unfortunately it was an old fake news message.

In addition, there was also a news report that the Securities and Exchange Commission (SEC) had finally approved a bitcoin exchange-traded fund (ETF). Such an ETF would make it a lot easier for institutional investors and retail investors, among other things, to invest in bitcoin, possibly resulting in a new cash inflow into the crypto market. But unfortunately, this was also about fake news!

The last possibility that we will discuss in this article is the threatening hard Brexit. The inability of Theresa May to guide her Brexit deal through parliament means that a hard Brexit on 11 April will become increasingly plausible.
We have often seen that bitcoin benefits from uncertain times. The British may choose eggs for their money and exchange part of their pounds for bitcoins. In this way, they can protect themselves against the possible negative consequences of the Brexit, since bitcoin retains its value relatively in such situations.

A little bit of everything

However, it remains difficult to determine exactly what the cause of this price rally was. The bitcoin and crypto markets in general are largely driven by emotion. They benefit enormously from good news and the hype around cryptocurrency and blockchain. It is therefore quite possible that all three factors in this article played a role in the recent rally.