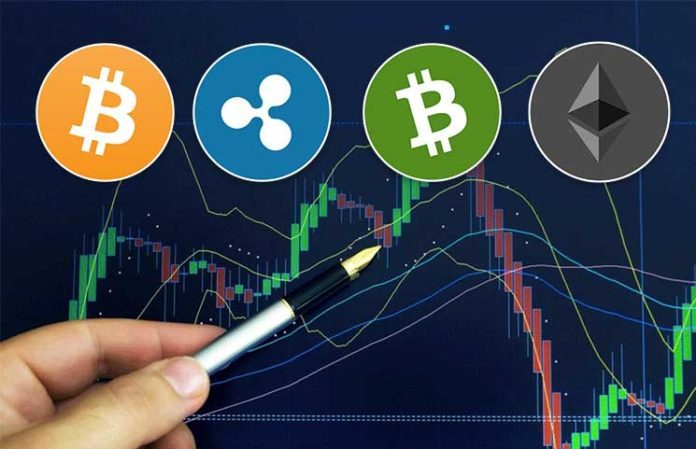 From yesterday’s open at $3761 the price of Bitcoin fell at first to $3721 and started increasing again, but when it came back to around the levels of the open it started decreasing again and this time with stronger momentum.

The price fell to $3640 yesterday which is the prior range resistance now retested for support as the price once again started moving to the upside and is currently sitting at $3698 which is an overall decrease of 1.7% from the yesterday’s open.

Looking at the hourly chart you can see that the price has fallen a bit further down than I was expecting it, but it only confirmed my EW count as it came to the proximity of the ending point of the 1st impulsive wave.

As the 5th wave develops I have lowered my initial target as the 4th wave ended lower, which is why now I believe that the price isn’t going past the 0.5 Fibonacci level as it encountered some strong resistance and a dip pullback indicating that the momentum behind the upward has diminished significantly.

For this reason, I don’t believe that the price is heading above the 0.5 Fibonacci level which serves as strong resistance, so another attempt ending as a rejection seems most likely.

After the rejection, I would be expecting further downside for the price of Bitcoin potentially below the 0.236 Fibonacci level, as this upward move was most likely a minor correction to the upside from this last downtrend.

From yesterday’s open at $132.2 the price of Ethereum has fallen at first by 9% at its lowest point yesterday when it came down to $120.25. From there the price started increasing and is currently sitting at $125 which is an overall decrease of 5.83%.

On the hourly chart, we can see that price fell below the minor support line but since it started increasing again it continued above it and spiked all the way up today to $130 area but came down since, with the equal momentum as it came up and found support on the minor support level.

This would probably lead to further increase as the 5th wave develops and would either go up to he levels of the 3ed wave, which would bring the price of Ethereum back to around $133.4 or go a bit further up.

Optimally I would be expecting an interaction with the downward channel’s resistance line before the price starts moving to the downside again.

We are most likely going to see further downtrend continuation as this move to the upside looks like it was a corrective move. The momentum was not supported and judging but the large almost same size red candle, the sellers are as equally strong.

If the downtrend continues we are likely going to see the price of Ethereum land on the next strong horizontal support level that can hold the momentum behind the downward pressure is around $104.

From there the price continued moving to the downside and is currently sitting at $0.334 which is an overall increase of 2.37% from yesterday’s low.

On the hourly chart, you can see that the price action created a symmetrical triangle as the price consolidates after the drop from around $0.4 area. After the consolidation ends I would be expecting a breakout to the upside as the fifth impulsive wave should start.

Y wave from a higher degree count is almost complete but we may not see the expected increase before another low, as this current upward move looks corrective after all so it would probably end as the second wave X.

From yesterday’s low at $124.8 the price of Bitcoin Cash has increased by 2.89% as its currently being traded at $128.4. The price did go further up today when it spiked up to $130.5 but that was only for a short time period as it came back down in the same hour as the candle closed at $129.

On the hourly chart, there is a clear sign that the price of Bitcoin Cash is heading for a further increase from here as it previously broke out from the descending range and has now come down to retest it for support on the 4th wave.

The price created a cluster below the current minor descending resistance line as it attempted to move upwards. Since the minor retracement occurred and the price found the support we are now likely going to see the further upward movement as the wave 5 should start developing.