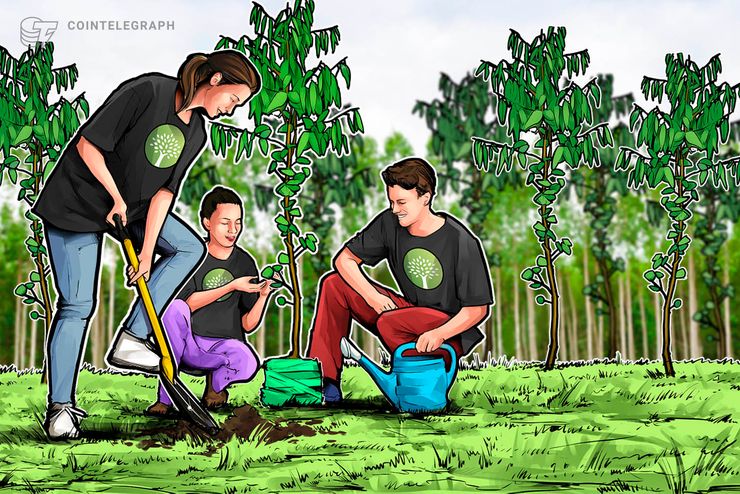 A group of German entrepreneurs have come up with a blockchain-based project that aims to help save trees in Paraguay, one of the countries most affected by deforestation.

Every minute, our planet loses 27 soccer fields worth of forests. In a year, that makes up to more than 75,000 square kilometers, and in 2016, according to a study by the University of Maryland, a sad record has been set: About 297,000 square kilometres of forests have been cut down, slightly less than the entire territory of Italy.

The consequences are harsh. Deforestation is responsible for about 15 percent of greenhouse gas emissions, which cause global warming.

The project, called TreeCoin, aims to stop the deforestation one small step at a time. It offers participants a share in an ambitious reforestation project in Paraguay, where fast-growing eucalyptus trees will be planted in vacant areas 20 percent bigger than the entire city of Paris — and that’s just the start.

According to the company, every four years, the land will generate a profit from selling precious eucalyptus timber — and every four years, more and more square kilometers of forests will be saved from being cut down somewhere else. A portion of the profits will be reinvested to purchase land to plant more trees, and so on.

In 22 years, the team intends to accumulate some 597 square kilometres of recovered forest area that they say will “continue to generate profits forever.” That’s the essence of the TreeCoin project, presented at BlockShow Asia by a group of German businessmen led by Mr. Jörg Schäfer, also known as Mr. Green.

TREE is a security token that will be issued by the company under Swiss jurisdiction. The token purchaser can decide how many trees they want to plant at the start of the project. One TREE token is equal to one tree planted at the start of the project and will be worth $23, with all land purchases and management overhead included, the company explains.

TreeCoin promises that 50 percent of the profit made by selling the timber will be reinvested to buy more land to plant more trees, and 10 percent will be donated to charities to support projects related to “nature, water treatment, hospitals, child care centers, foundations, and associations for people with handicap and disadvantages.”

The current project’s scope is 22 years, and during that period, the TreeCoin team will seek to amass some 597 square kilometres under its management, becoming one of the largest landowners in Paraguay.

Another novelty of TreeCoin’s approach is its “dual offering” method. According to the company, every TREE security token issued will trigger the emission of 100 TreeCoins, the accompanying payment tokens of the project. Seventy of these will go to the holder of the TREE token, and the remaining 30 will go to the project team to cover expenses and pay workers’ salaries.

The team says the project has the backing of the Paraguayan government to implant TreeCoins as a legal tender into the local economy of the area where the project will operate. The company promises to pay the local workforce “above the average” and will give 20 percent of the wages in TreeCoins directly to local employees’ e-wallets. To incentivize TreeCoins’ use, TreeCoin plans to partner with local grocery stores in order to offer discounts between 15 and 20 percent on all purchases made with TreeCoins.

TreeCoin is freely tradeable, so TREE token holders will be able to sell their TreeCoins to the local economy’s actors when the project takes root, the company highlights.

The team admits TreeCoin alone will hardly make a noticeable change in the extinction of the rainforest: Even at its maximum capacity, TreeCoin’s enterprise will save just about a couple of days worth of lost forests every four years. However, the project aims to set an example for the rest of the business world.