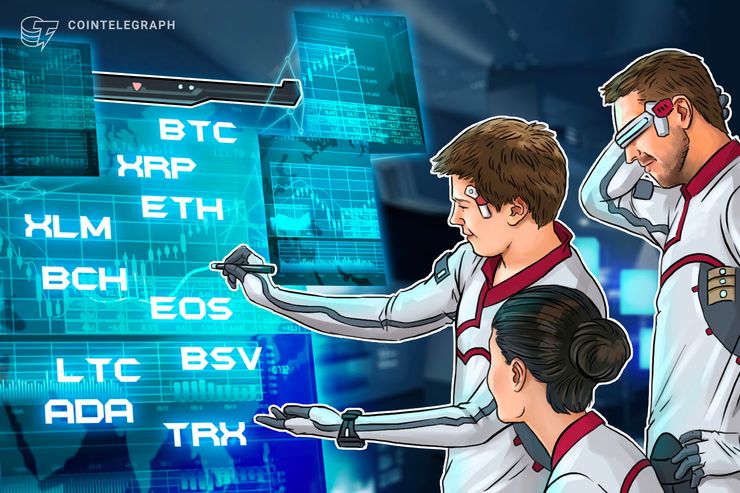 
The views and opinions expressed here are solely those of the author and do not necessarily reflect the views of Cointelegraph. Every investment and trading move involves risk, you should conduct your own research when making a decision.

Market data is provided by the HitBTC exchange.

Mark Dow, a former International Monetary Fund (IMF) economist who had bet short on Bitcoin in December of last year, has tweeted that he has covered his positions. However, Dow also mentioned that he has not opened a long position and has no interest in doing so.

Another prominent trader, Mike Novogratz, an ex-Goldman Sachs partner and founder of crypto merchant bank Galaxy Digital, expects the leading digital currency to hold $3,000. He anticipates a consolidation between $3,000 and $6,000 in the near future.

A few crypto hedge funds that had jumped on the bandwagon without proper risk management measures are closing down. However, others — like Morgan Creek Digital — are getting more aggressive in deploying their capital at these low prices.

This shows that the players who invested smartly are benefitting from the fall and are expecting a bright future going forward.

Bitcoin is currently in a pullback. It has broken out of the 20-day EMA for the first time since Nov. 14. This shows buying by the aggressive bulls and short covering. Wednesday is the third day of the pullback. Usually, during a strong downtrend the throwback rally fizzles out within three days.

If the bulls continue supporting the BTC/USD pair, it may reach the first overhead resistance of $4,500. We anticipate some resistance at these levels, as short-term traders will look to book profits, and aggressive bears will establish short positions once again.

The main trend still remains down. However, the flattening 20-day EMA and the RSI in the neutral territory show that the short-term trend is changing. The next leg down will give us a better idea of whether a bottom is in place, or if this is just a relief rally.

The important levels to watch on the upside are $4,500 and $5,000. On the downside, a break of $3236.09 will resume the downtrend. Investors can hold on to their positions. We shall wait for a new uptrend to start before adding positions.

The recovery in Ripple has cleared the 20-day EMA and is facing resistance at the next overhead resistance of $0.4. The 50-day SMA is also located close by, so we anticipate a minor pullback or a consolidation at this level.

If the bulls scale the 50-day SMA, the rally can extend to the resistance line of the descending channel at $0.5. The $0.5–$0.62 zone will act as a major roadblock. Short-term traders can book partial profits at these levels and trail the stops on the remaining positions higher.

Conversely, if the XRP/USD pair turns down from $0.4, it can correct to $0.33108. Both moving averages are flattening out and the RSI has jumped into the positive territory, which indicates a trend change. We shall get a better idea in the next 3–4 days.

Ethereum has risen above the overhead resistance of $102.5 and the 20-day EMA. In doing so, it has re-entered into the previous consolidation.

The ETH/USD pair can now move up to the top of the range at $130. The $130–$136.12 zone is likely to act as a stiff resistance. Short-term traders can book partial profits at these levels and trail the stops on the remaining position higher.

If the bulls fail to sustain the momentum and the digital currency corrects without reaching our desired target objective, we anticipate strong support at $102.2. If this level breaks down, a retest of the lows is probable.

EOS easily scaled the 20-day EMA and is on target to reach the 38.2 percent Fibonacci retracement of $3.0510. This might act as a minor resistance.

However, the 20-day EMA has flattened and the RSI has risen close to the positive territory. This shows that the short-term trend is changing. Above $3.0510, the pullback can extend to $3.5147.

If the EOS/USD pair turns down from one of the above levels, it is likely to find support close to $2.1733. The downtrend will resume below $1.55.

Stellar has reached the critical overhead resistance of $0.13427050 from where it had turned down on Dec. 8. If the bears defend the level again, we might witness a minor correction or a consolidation.

However, the XLM/USD pair is an underperformer, as it has not even crossed the 20-day EMA and its RSI is still in the negative territory. Hence, we are not proposing a trade in it. We shall revise our outlook if we find a reliable buy setup.

As we had expected, Bitcoin Cash has risen sharply from its low of $72.39. This has corrected the oversold levels on the RSI.

The price has reached the 20-day EMA which might act as a stiff resistance. We anticipate a minor pullback from this level. On the downside, $100 can act as the first support.

However, if the bulls continue to buy and scale above the 20-day EMA, the recovery can stretch to $205. The BCH/USD pair has a history of vertical rallies, so the traders who went long at lower prices should keep partial positions open with a trailing stop loss, to ride any spikes. Our bullish view will be invalidated if the price plunges below $72.39.

Litecoin has risen above the overhead resistance of $29.349 and the 20-day EMA. The pullback can now extend to $36.428. The downsloping 50-day SMA is just above this level. Therefore, we expect this to act as a major hurdle for the bulls.

The 20-day EMA has turned flat and the RSI has risen into the positive territory. This suggests that the short-term trend is changing. After such a long bear phase, we anticipate the LTC/USD pair to complete a bottom formation before starting a new uptrend.

A few days of range bound action is likely. Therefore, the short-term traders should book profits at regular intervals. Our assumption will be invalidated if the bears sink the virtual currency below $23.090.

As long as the BSV/USD pair remains in the range, it is likely to reach the top of the range at $123.98. Our bullish view will be invalidated if the price turns down from the current levels and plunges below $80.352.

In such a case, the bears will try to sink the virtual currency below $65.031. Due to the short trading history, the traders should book profits at regular intervals and trail the stops on the remaining position to protect their capital.

TRON has proven its status as an outperformer among the top cryptocurrencies. Its pullback has breached the 50-day SMA and is retesting a major support at $0.0183.

Traders who went long at lower levels can book partial profits at these levels because we anticipate a strong resistance at $0.0183. The correction from the current levels is likely to find support at the 20-day EMA and $0.01339050.

On the other hand, if the TRX/USD pair scales and sustains above $0.0183, it can rise to $0.02815521 in the medium-term. The rising 20-day EMA and the RSI in the positive territory suggest a possible trend change.

Cardano has risen above the 20-day EMA and has entered into the previous range of $0.033065–$0.045516. The 20-day EMA is flattening and the RSI is close to the neutral zone. This suggests a likely consolidation in the short-term.

However, if the bears again sink price below the range, a retest of the low at $0.027237 is probable. The downtrend will resume if this level breaks down. Traders should quickly close their positions if the virtual currency doesn’t break out of the resistances.

Market data is provided by the HitBTC exchange. Charts for analysis are provided by TradingView.

Ethereum Will Flip Bitcoin For Sure, Raoul Pal Explains