Ethereum network just witnessed the highest value of transaction fees being spent on a single transaction. According to an on-chain data provider, Ether scan noted that on block number 10237208, a transfer of 0.55 Ether which was worth $133.87, was transacted for a fee of 10,668.73185 ether or $2.596 million. 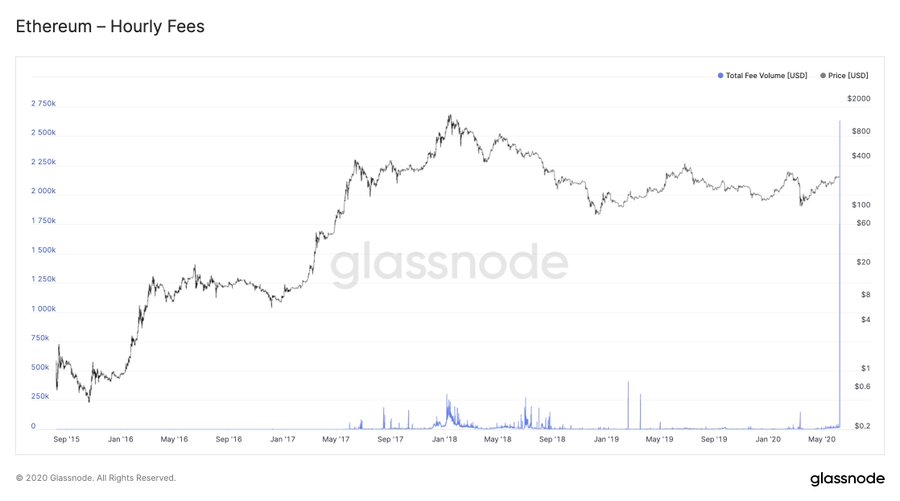 This has been the highest transaction fee paid on the Ethereum network to date. Crypto Twitter was out speculating the reasons behind this and many attributed it to human error but a twitter user, @atvanguar, suggested that a hacker meant to launder Ethereum. Since transactions cannot be reversed, the sender will be at a loss of millions, but this might serve as a reminder to be extra careful while transacting crypto.

Looking into the details of the transaction, the sender had a balance of 45,997.92 Ether, which was close to $11.200 million. This infamous transaction of 0.55 ether was allotted all the available gas which was 21,000. This could have been the result of negligence from the sender’s end; Messari’s Ryan Watkins highlighted the challenges with cryptocurrency user experience.

Gas on Ethereum measures the amount of computational effort it will take to execute a certain operation. As miner Spark pool mined the block, this error might have led them to gain millions for a minuscule transfer.

Looking into the receiver’s wallet address- 0x12D8012Cb8B268D59fbf0b2F7C2302F25EC74E84, this transaction was instantly moved to another address with the balance of zero ether. However, this subsequent transaction did not note a high transaction fee, but 0.000861 Ether [$0.21].