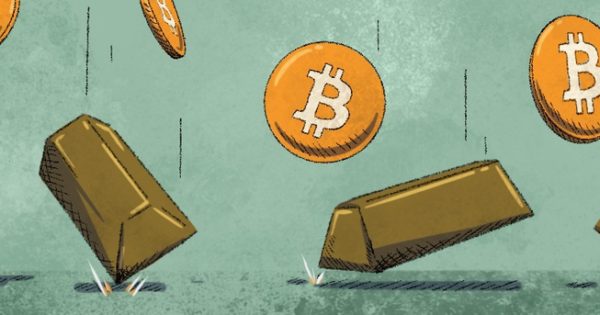 
Bitcoin is often described as “digital gold.” While this is an oversimplification, it can be a helpful way of understanding some of bitcoin’s most critical properties — the things that “give bitcoin value.”

One of bitcoin’s preeminent use cases is in its role as a store of value, a status that gold has long embodied. Though the price is volatile, many Bitcoiners who believe in its long-term value to an increasingly decentralized society see it as a long-term investment, and citizens of countries whose economies are distressed regularly turn to bitcoin as a safe haven asset.

Bitcoin also derives much of its perceived value from the fact that its supply is strictly capped, in a similar way to natural and finite resources like gold. Then there is bitcoin mining which — while just a metaphorical term for adding transactions to the Bitcoin blockchain in exchange for a bitcoin reward — can serve as another parallel between bitcoin and precious metal.

Even though bitcoin is far from just a digital version of gold, these connections persist in the minds of new adopters and hardcore Bitcoiners alike. It has spurred a variety of initiatives, offerings and services from digital asset managers — each of which is its own interpretation of the analogy that bitcoin is digital gold.

The Drop Gold Campaign: Bitcoin as the Digital Replacement for Gold

As the name implies, the campaign is meant to encourage potential investors to withdraw or divest their gold investments in favor of investing in cryptocurrency or cryptocurrency-based products, such as the Grayscale Bitcoin Trust.

“The point of #DropGold is to ignite a conversation with investors through highlighting Bitcoin’s benefits, as compared to an investment in gold,” Michael Sonnenshein, managing director of Grayscale, explained to Bitcoin Magazine. “Gold is a traditional investment in a physical world but today’s world is digital and demands a digital investment.”

As much as the “digital gold” narrative might favorably imply that bitcoin has some of the more attractive qualities of the physical asset, Grayscale dismisses the comparison as actually selling bitcoin too short.

“We agree that bitcoin and gold share a lot of the same properties; Bitcoin and gold are both scarce assets, they are both decentralized assets,” Sonnenshein said. “But bitcoin posses a superior composition of ‘good money’ qualities made for a digital global economy. For example, the fact that you can send bitcoin electronically or that you can access your holdings from anywhere in the world are just a few of the traits that make bitcoin the superior store of value.”

In its online material, Drop Gold points to the fact that bitcoin ownership is verifiable via a blockchain and easier to transfer and more fungible than gold. Essentially, the fact that bitcoin puts the “digital” in “digital gold” is what makes it the superior asset. So, as far as bitcoin being digital gold goes, Grayscale might argue that this is true only in the sense that bitcoin is an evolved, digital asset that will do a better job of playing a role than gold once did.

But there will always be those who argue that the physical can never be completely replaced by the digital. While firms like Grayscale see the future in abandoning legacy investments in favor of cryptocurrencies, there may be more room to combine the two.

The DGLD token acts as that more direct combination, embodying the digital gold quite literally.

DGLD is the result of a partnership between digital asset management firm CoinShares, multifaceted cryptocurrency service provider Blockchain and worldwide gold dealer MKS SA. It is a network with a namesake token that represents allocated physical gold stored in a Swiss vault — each DGLD token represents one-tenth of a troy ounce of physical gold.

The DGLD network was built on the Ocean Bitcoin sidechain, a network developed by the blockchain firm CommerceBlock using the same codebase as Blockstream’s federated Bitcoin sidechain, Liquid. But, instead of maintaining a federation of intermediaries between it and the Bitcoin blockchain, Ocean’s sidechain automatically attests the latest block hash into the Bitcoin network at regular intervals.

In this way, the DGLD network would seem to have combined the physical scarcity and tangibility of gold with the immutability and transparency of Bitcoin — creating a blockchain asset that may be as close to a literal interpretation of digital gold as possible.

In Masters’ view, by combining certain aspects of gold and bitcoin into a unique asset, DGLD offers investors a more convenient way of investing in the former.

“Many people do not own physical gold, and instead own gold through a series of intermediaries, often in an ETF or similar format, primarily because of convenience,” Masters said. “With DGLD, you get a convenient physical gold investment that isn’t entangled in the same system of intermediaries it is meant to hedge; and because it’s gold, the investment is not tied to the monetary policy whims of a central bank or fiat currency.”

DGLD was just introduced in October 2019, so it would be hard to confirm, but it may be that many of those who invoke bitcoin as digital gold are interested in a token that can draw that comparison more closely.

Vaultoro: When Bitcoin and Gold Work Together

Of course, some may point out that only bitcoin is bitcoin — no other tokenized asset, on a Bitcoin sidechain or otherwise, has exactly the same immutability and transparency as the one and only original cryptocurrency.

For those Bitcoiners, Vaultoro may be the closest thing to merging the benefits of both bitcoin and physical gold.

Vaultoro is an online cryptocurrency exchange whose order book is backed by physical gold in a Swiss vault, allowing users to trade bitcoin for gold and vice versa, rather than for fiat currency. This may more directly close the loop for bitcoin as “digital gold,” making the cryptocurrency quickly and conveniently exchangeable for actual gold.

The service was inspired by one of Bitcoin history’s most infamous events, a reminder that, for now, bitcoin has to be tied to a more traditional asset. And if that is going to be the case, the Vaultoro thinking goes, then that asset should be gold.

“After the world’s first bitcoin exchange, Mt. Gox, collapsed, liquidators started to eat through all of the creditor’s fiat holdings because fiat cannot be allocated. Instead, it becomes part of the exchange’s balance sheet,” explained Joshua Scigala, CEO and co-founder of Vaultoro. “Gold, on the other hand, does not need to sit in a bank, it can be allocated to the client as their legal property, and not to the exchange’s books … Gold is the perfect bank-independent counter asset to bitcoin.”

Scigala sees the inherent advantages of both digital assets and gold but doesn’t necessarily want to merge them. Instead, he’s seeking to provide investors with seamless access to both independently, thus preserving those advantages.

“I think that both assets work perfectly together,” he explained. “Just because people have Netflix and nice big TVs at home doesn’t mean people stop going to the cinema. Gold is a great way to hedge the crypto price risk without going back to the systemically broken and risky fiat system. Rare numbers and rare metals are the perfect partnership.”

Thus, Vaultoro seems to interpret the potential of digital gold for those who value bitcoin, value gold and want both of these assets to maintain the things that make them unique but in closer concert with each other.

Digital Gold: Value Is in the Eye of the Beholder

There we have three distinct interpretations of the “bitcoin as digital gold” simile.

Grayscale rejects the idea that we still need gold when bitcoin is available: Bitcoin as digital gold in the sense that bitcoin has replaced gold for the digital era.

Meanwhile, DGLD has created a token directly representing gold using the Bitcoin network: Bitcoin as digital gold in the sense that the technology behind Bitcoin can be used to create a digital version of physical gold.

And Vaultoro links the two assets by allowing investors to exchange between them: Bitcoin as digital gold in the sense that both are hedges against the fiat monetary system and have complementary roles to play.

The interpretation you subscribe to will likely align with your own values and how much room you see for bitcoin and gold to coexist. But what is clear throughout these differences is that gold and bitcoin will be inextricably linked for years to come.