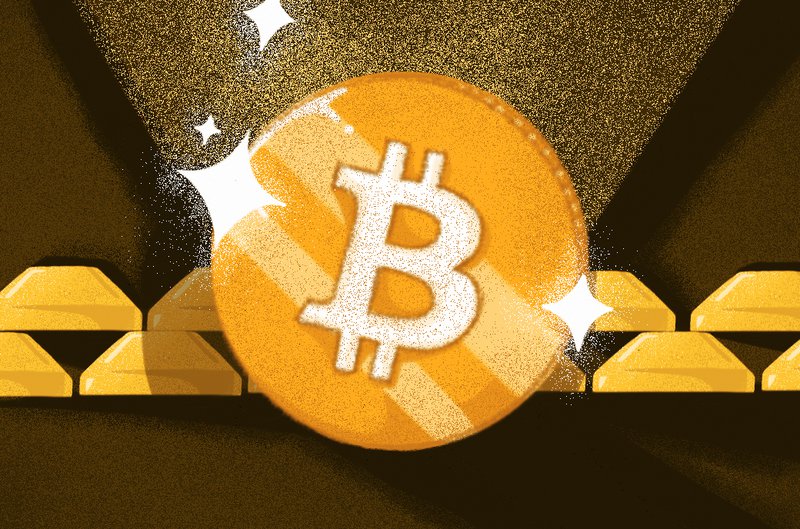 
Grayscale Investments is weighing in on the gold versus bitcoin debate. Its two sats? Drop the bars, buy the bits (and the dip).

The Digital Currency Group off-shoot has launched a “Drop Gold” campaign that encourages investors to ditch the old asset for its digital counterpart, bitcoin.

“Everyone loves a piece of gold jewelry, but is gold really the best investment in today’s digital world?” This is the rhetorical question that the website challenges its readers to consider. “Gold represents the past,” it continues, saying that Nixon dropped the gold standard that backed USD back in the ’70s.

This statement, accompanied by a caricature of the Watergate president, is tinged with irony. Nixon nixing the gold standard officially cemented the USD as a fiat currency, and this has become one of the primary examples bitcoin advocates cite when discussing why the cryptocurrency matters.

With the campaign comes a commercial featuring suits and financiers lugging around hordes of gold. “Why did you invest in gold? Did you invest in the past?” the commercial asks its viewer, asserting that “gold shouldn’t weigh down your portfolio.” Unencumbered after dropping their own gold holdings, a man and woman race through the streets of a city which is populated with people struggling to schlep caches of gold by way of a shopping cart, baby carriages and a dolly.

Coinciding with the commercial’s first mention of bitcoin in an ostensible (and cheeky) nod to the industry, a lamborghini comes skidding around a street corner with several hundred millions of dollars worth of gold in tow.

“Cryptocurrencies like bitcoin are the future. They’re secure, borderless, and unlike gold, they actually have utility,” the commercial posits. This last point feels a bit too pointed and a tad ironic, considering it ignores gold’s crucial utility (among other things) for computer circuits and the very hardware that allows us to access the internet and, by extension, bitcoin.

Toward the end of the 39-second ad, a woman is weeping over a trove of gold coins spilled at the subway entrance, and gold bars are literally raining down from the sky as they are flung from a helicopter in freefall, apparently weighed down by a net hoisting an inordinate quantity of gold bars.

The rest of website rehashes much of what the commercial emphasizes, harping on gold’s weight as an obvious downside to bitcoin, which, as a lighter and less-frictioned investment option, “is weightless and can be bought, sold, and transferred as easily as a text message.”

“It’s not that gold is bad,” it qualifies. “It’s just that bitcoin is better,” offering a link to an article explaining Grayscale’s reasoning.

That reasoning becomes more apparent down below as Grayscale promotes GBTC, its bitcoin investment vehicle.

This trust is one of many cryptocurrency investment vehicles that Grayscale offers, which includes ether, litecoin, stellar lumens, ethereum classic, zcash, xrp and bitcoin cash (most, if not all, of which are held by Grayscale’s parent company, Digital Currency Group). Its bitcoin investment trust was launched in 2013. According to the website, you can buy and sell GBTC with ally, Charles Schwab, E-Trade, Fidelity Investments, Interactive Brokers, TD Ameritrade, Trade Station and Vanguard.

The campaign is a bold crusade against what many believe to be bitcoin’s physical predecessor, and one that shares many of the Austrian values that bitcoiners believe give the digital alternative value over fiat. Gold bugs argue that the two are dissimilar and that bitcoin holds no intrinsic value; this argument is a bit like looking in the mirror, considering the retort from bitcoiners is one and the same.

THIS INDICATOR SHOWS BITCOIN HIT A PIVOTAL LEVEL; WHY BULLS ARE IN CONTROL

Why Does Binance’s Android App Need to Use Your Microphone?