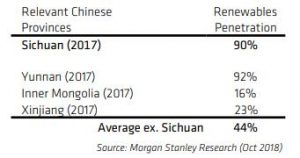 This article was originally published by 8btc and written by Lylian Teng.

China’s Inner Mongolia Autonomous Region has recently issued a notice demanding a cleanup of bitcoin mining operations within the region where it is concentrated.

As local cryptocurrency news outlet ChainNews reported on September 14, 2019, five departments of Inner Mongolia’s government have issued a notice to rectify the bitcoin mining industry within the province.

“The ‘mining’ industry of virtual currency belongs to the pseudo-financial innovation unrelated to the real economy, and should not be supported,” according to ChainNews’ report of the notice. “The Development and Reform Commission, the Public Security Department, the Department of Industry and Information Technology, the Financial Office and the Big Data Bureau decided to carry out a clean-up and rectification of such enterprises and have them orderly exit from the region.”

Noting the surging energy consumption of bitcoin mining, Xinjiang took the lead in demanding a phase-out of illegal bitcoin mining operations in July 2019; in May 2019, authorities in Sichuan also said they had been investigating illegal cryptocurrency mining farms. But it seemed to have little actual impact on Chinese miners who already operated in a legal grey area.

If this order from the local government is strictly followed in Inner Mongolia, costs for bitcoin mining in China may increase and the bitcoin hashrate may be influenced in the upcoming dry season. Miners opportunistically relocate their mining devices from Sichuan to Inner Mongolia and Xinjiang once the wet season (from May to September) in Sichuan comes to an end and hydropower is less prevalent.

In April 2019, China’s state planner said it wanted to eliminate cryptocurrency mining throughout the country over a concern about energy use and environmental pollution, but no such ban has been entered into law so far.

In such a context, many large-scale bitcoin mining farms in China have sought to move abroad. Some people also propose to use clean energy, such as overabundant hydropower in southwestern China (Sichuan, Yunan and Guizhou), and wind or solar energy in the northwest (Xinjiang and Inner Mongolia) as the electricity supplies for bitcoin mining. Apparently, these proposals have failed to gain support given regulators’ unamicable attitudes toward cryptocurrency.

Discovering Bitcoin: A Brief Overview From Cavemen to the Lightning Network