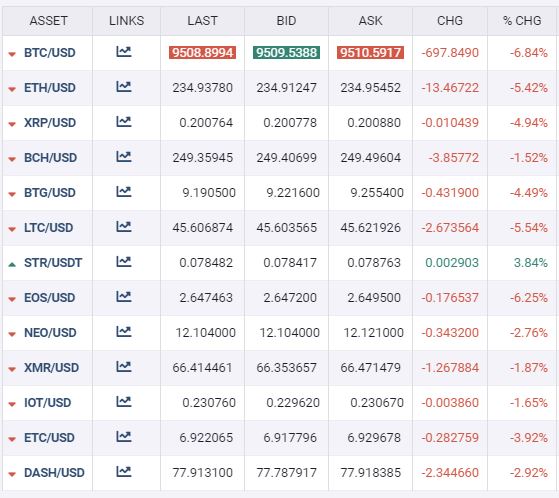 The Crypto market suffered huge losses early in the US session as a wave of selling ensued.

Bitcoin has taken a tumble on Tuesday just as the 10K level looked to have been a thing of the past. This looks like a bank of orders have been triggered or some potential profit-taking has taken place. Either way, this leads to traders looking for levels where the market might stop. First and foremost the price is now struggling at the 4-hour 200 period Simple Moving Average (SMA). Even looking back on the chart the 200 SMA seems to be a decent support and resistance zone on this timeframe but the volume on this move lower could be too hot to handle on this occasion. The next level down is the black support level at 9K. There has been 3 occasions on this chart alone where the 9K level has been used in a reactionary manner. Beyond this, there is another support zone near 7645.00 (marked in blue). This level is where a previous price drop back in March 2020 stalled. It then became a congestion point toward the end of April and could be a price magnet again.

The intense selling pressure surrounding cryptocurrencies caused Ethereum (ETH/USD) to fall sharply from multi-month highs it set at $253.50 earlier in the day.The pair erased near 7% in a matter of minutes and dropped all the way to $224 before recovering modestly. As of writing, ETH/USD was down 5% on the day at $235.50.

Stellar Lumen – Even the high performing XLM/USD lost more than 14% of its price within 11 minutes. Stellar is trading at $0.0784 as of writing after bulls bought half of the dip. XLM is now at risk of forming a nasty reversal doji candle on its daily chart if it drops and closes below $0.0757.

June 1 saw the enactment of amendments to Canada’s Proceeds of Crime (Money Laundering) and Terrorist Financing Act that were passed in June 2019 to address holes in the then-existing framework.

Candian crypto firms must now report all transactions exceeding 10,000 Canadian dollars ($7,403), and register and comply with the Financial Transactions and Reports Analysis Centre of Canada (FINTRAC).

There is another massive crypto market IPO on the cards

One of the largest semiconductor manufacturers in China, SMIC has announced plans to raise USD 2.8 billion in a public sale (IPO) on the Sci-Tech Board of the Shanghai Stock Exchange (SSE).

The Shanghai Stock Exchange approved the IPO and this will increase the overall competition in the Bitcoin mining firmware chipmaker industry.

SMIC is already listed in Hong Kong is looking to push China’s broader focus for self-reliance when it comes to semiconductors, a field in which the world’s second-largest economy (China) is seen as lagging far behind the U.S.

Western Union Wants to Acquire MoneyGram – Are Ripple and XRP in the Crosshairs?