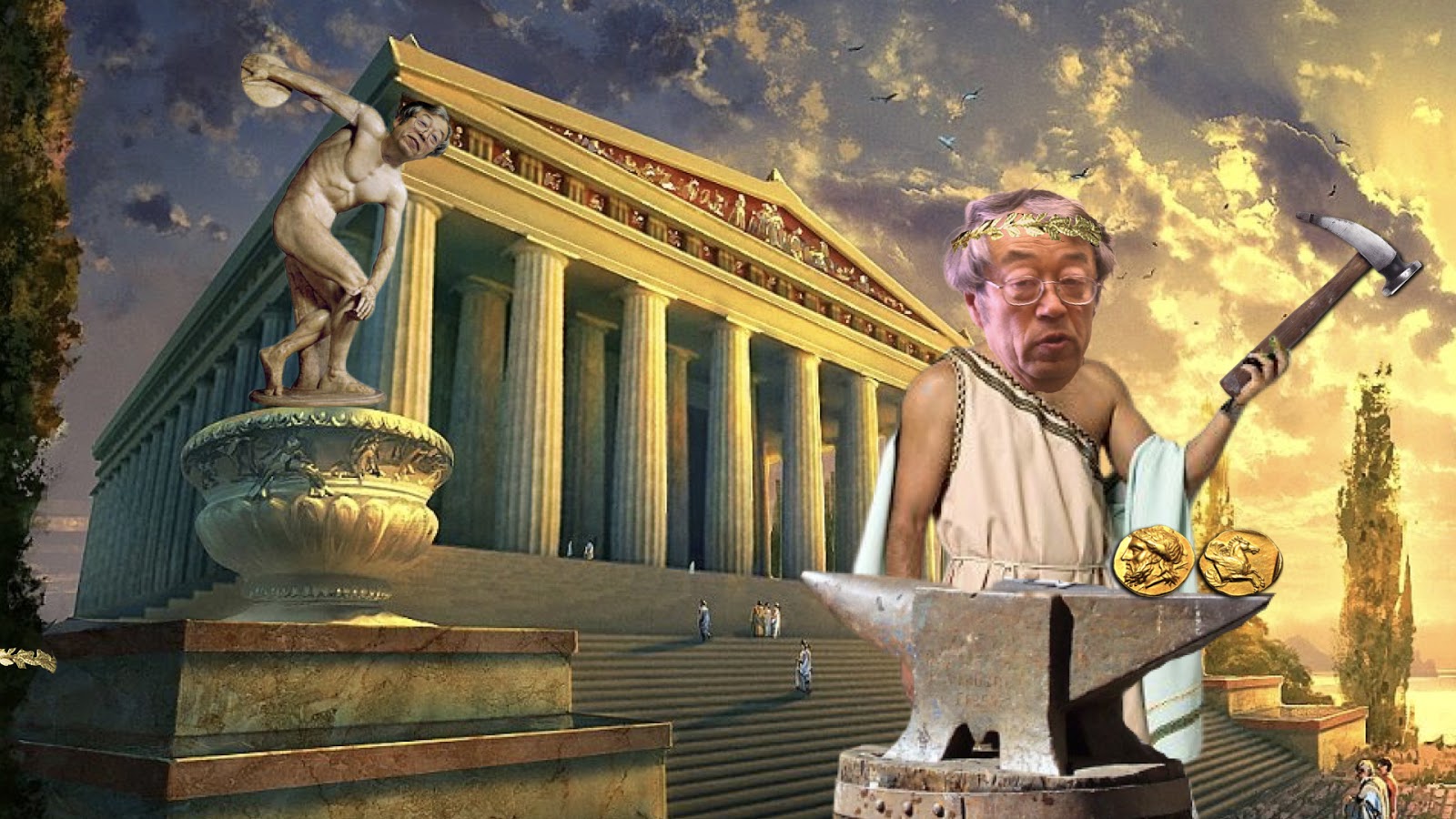 In this next installment of the “Discovering Bitcoin” series, we will build on the previously acquired strategies of optimizing “hardness,” “scaleness” and “darkness” to explore concepts of virtualization and decentralization.

The Path Toward Virtualization

The question “Where?” will bring us to the (quite unhappy) end of Plan A and the beginning of Plan ₿!

Thanks to your noble efforts, everybody is now using gold and silver as money. (With such a track record, you decide monetary innovation is your actual vocation: You sell your fishing fleet to focus on that exclusively.)

The next innovation you introduce is “coinage.” While people used to sustain important verification costs when receiving metal money, now you can pre-sign standard measures (obviously you ask for a fee for such a service, called “seigniorage”), and everybody can just cheaply verify your signature.

Coinage (which is particularly interesting for Bitcoin, since it’s similar to the dangerous practice known as “SPV,” which we will discuss later in Part 7) increases hardness locally, since lower verification costs mean higher forgery costs for occasional counterfeiters. But while it may increase locally, hardness may also decrease globally: Now you have the ability to inflate the money supply with a trick called “debasement” (just put less gold in your coins than you originally promised, secretly increasing your seigniorage fee).

Next, you invent “custody”: Instead of securing their coins directly, people can entrust them to you, in exchange for convertible certificates. Since you leverage economies of scale and specialization, you’ve become quite efficient at securing other people’s money (for a fee, of course).

Custody increases scaleness dramatically! So much so that it helps the convergence process to reach its ultimate completion: Having to store just paper instead of physical gold (not very divisible) and physical silver (not very portable), people converge over the former (harder money), demonetizing the latter (the monetary premium of which will eventually collapse).

But global darkness and hardness may instead decrease: In the redeeming phase, you could easily track and censor transactions, or you may practice what is called “fractional reserve” (keeping less collateral than issued certificates, basically inflating the “virtual” supply).

Your next proposal is complete virtualization. (Funny note: Bitcoin is often called “virtual money,” but money has already been “virtual” for centuries!) It’s the merging of custody and coinage: Instead of just entrusting you with some signed coins in order to redeem them later themselves, people can start trading your signed paper certificates directly, using them as a medium of exchange. You finally invented “banknotes”!

It’s not commodity money anymore; it’s some kind of “information money” (not yet what we call “fiat money,” though — it’s still a form of free-market innovation, emerged from society without any kind of legal imposition, provided by different competing actors and collateralized with physical gold in custody). Sure, you could abuse censorship, debasement and fractional reserve, if you wanted, but you aren’t Mallory (our bully from Part 3); you’re a reputable professional, and these bad incentives are mitigated by the competitive pressure of several other providers.

We could consider the process of virtualization as an extreme case of specialization (after money enabled division of labor, money management itself become a specialized job itself). It’s a centralizing process: Collateral physically moves from many users to the few service providers.

Ultimately, the “Where?” question isn’t really geographical in nature: It’s more about control. The provider may have vaults, or mints, distributed across the world, but their control is centralized.

You haven’t forgotten about Mallory the bully, right? Good, because he is the main character in the transformation from free-market virtual money to fiat money! For a while he posed as a mere competitor to your services of custody and coinage, but now he is revealing his true colors.

While it was pretty difficult for him to take over the very decentralized process of people exchanging gold nuggets, there are now a few big, public, trusted, vulnerable entities he can easily seize control of.

First, he uses threats of physical violence to establish a compulsory monopoly on virtual money (or even on money tout court, regardless of whether or not the physical variant is out of fashion anyway by now), ruling all the alternative money services, including yours, “illegal.” Then he forces everyone to always accept his particular brand of virtual money as payment at face value. (He likes to call this obligation “legal-tender laws.”)

Finally, he abolishes any kind of redeemability of his certificates in actual gold collateral. Now the supply of money is politically defined (by Mallory-appointed central bankers, who can finally implement “monetary policies” to shape the economy based on his political goals), while the demand for money is politically driven (since people are forced to own the legal tender to pay taxes to Mallory, and are forced to accept it at nominal value when they trade).

Until now, in the context of free-market virtual money, competition and market forces could have somehow still incentivized banknote issuers to “behave.” With fiat money, thanks to legal monopoly and legal-tender laws, there’s no competition anymore, at least not within the context of Mallory’s “jurisdiction.” (There are other, smaller Mallories around the world, but they all joined the Big Mallory in a huge cartel).

The Internet and Digitalization

Enter the digital era! With e-commerce, people need to transact over the internet, but they can’t exchange paper there. Mallory’s fiat money (which is already virtual) migrates to digital versions that are orders of magnitude more efficient: Scaleness increases again!

Somebody could argue that in leveraging digital technologies, scaleness would have gone up even more in the competitive context of digital free-market money (since a monopoly keeps costs high while keeping efficiency, transparency and innovation rates low). But since things are improving anyway, nobody complains too much.

But hardness and darkness decrease dramatically: The money supply can be manipulated to degrees never seen before, and Mallory can track and censor transactions to Orwellian extents.

As a money entrepreneur, you try to leverage the same innovations that made Mallory’s money so powerful in order to bring back free-market representative money, only this time “on digital steroids.” Your hope is that the very same internet that Mallory leveraged to increase his power could also be leveraged by you to bypass, ignore and circumvent Mallory’s impositions.

You launch a startup called “e-gold” (this is all completely fictional, of course). Your service allows pseudonymous users to open accounts denominated in grams of physical gold, freely transacting among them.

You set it up using technological best practices and you devise innovative governance structures. After some time, your system has grown to 5 million accounts, processing the equivalent of 2 billion Mallory-dollars per year!

But despite your great execution and the positive market reception, all of your technical and legal skills cannot protect you from Mallory’s violence forever. Eventually, he manages to shut your business down and send you to jail, discouraging other entrepreneurs from following your example. (They pivot to some traditional, Mallory-approved, digital fiat services instead.)

During the time you “serve” in jail as a retribution for daring to try to provide better money than Mallory’s, you realize something: It was very easy for Mallory to send you to jail, close your company and shut down its servers, because the personal, legal and technical structures were all easy targets.

What if, this time, you replace your official identity with some internet pseudonym (the Japanese-sounding “Satoshi” may be just as good a choice as any), your for-profit company with an open FLOSS project, and your server with a peer-to-peer protocol? Then Mallory would have no CEO to incarcerate, no legal entity to seize, no server to shut down!

The idea is to reverse the centralization trend that has prevailed until now, while retaining most of the advantages of technological progress that enabled e-commerce and e-finance.

But how can you actually decentralize asset issuance and ownership? We will answer the first of these two questions in “Discovering Bitcoin Part 5: Digital Scarcity.”

Bitcoin Is Not Anonymous and Tor Users Are Forgetting This