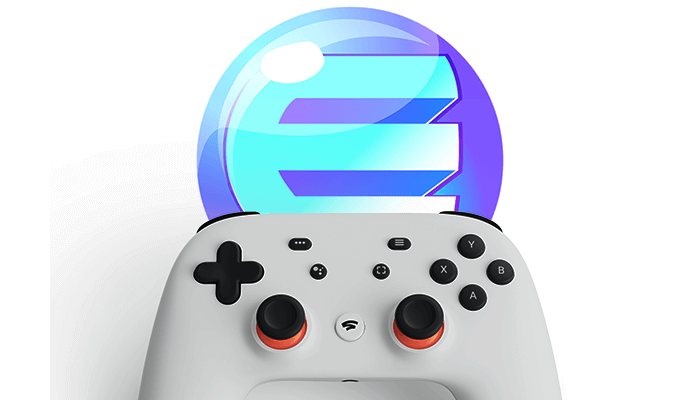 The Game Developers Conference (GDC) is currently taking place in San Francisco. On March 20, Google announced a new project: Google Stages.
With Stadia, Google wants to compete with the market for computer games that has a total market value of more than $ 140 billion.
Stages come in the form of a game controller that would allow easy access to a video game streaming service using Google Chrome. This system must then work on every TV or monitor, as long as one has an internet connection.
The potential of the new system is immense, not only for the gaming computer market but also for the cryptocurrency market. Google has announced two services that will support Stadia: Unreal and Unity.
Whoever is present at the GDC is Enjin. Enjin is a large Ethereum based gaming platform from Singapore with more than 20 million registered users. The blockchain developer has his own ERC-20 token, the Enjin Coin (ENJ), and uses ERC-115 tokens to share content in games on the blockchain.
Enjin also works together with Unity. Just like Unreal, Unity is a game engine, a platform on which games can be developed. That could mean that one would see Enjin’s games on Google’s Stages, which could have enormous potential for the adoption of cryptocurrency.
Enjin recently announced five new games to be added to Enjin’s Gaming Multiverse (MV). That brings the total to 22 games that are part of the Multiverse.
Enjin has also announced the launch of a new blockchain explorer, the Blockchain Explorer, together with Changelly.
Enjin announced collaboration with Samsung a few weeks ago. Enjin will be available on the new (and very popular) telephones from Samsung, the Galaxy S10 series. The Enjin Coin (ENJ) rose by no less than 550% after the announcement of the collaboration with Samsung.
At the time of writing, ENJ is worth about $ 0.184.