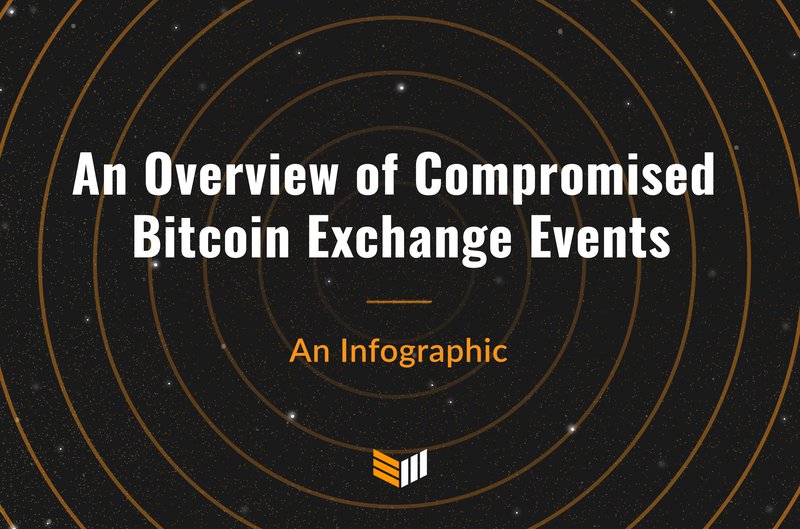 The x-axis shows the price of bitcoin at the time of the hack. The y-axis shows the amount lost in the hack (converted to BTC for altcoin hacks). The size of each hack circle was determined by the value of BTC lost using a consistent price, regardless of the actual price at the time.

In March 2014, Mt. Gox declared bankruptcy due to a series of hacks and thefts that went unreported for over three years, which were later documented by blockchain analyst Kim Nilsson. The final collapse resulted in a crash of Bitcoin in 2014. Below is a summary of all meaningful hacks that occured.

On March 1, 2011, 80,000 BTC were stolen from Mt. Gox’s hot wallet, as thieves were able to make a copy of the wallet.dat file. In May 2011, hackers stole 300,000 BTC temporarily stored on an off-site wallet, which was on an unsecured, publicly accessible network drive. However, shortly after, the thief got nervous and returned the stolen funds with a 1 percent (3,000 BTC) “keeper’s fee.” In June 2011, a hacker was able to get into Jed McCaleb’s administrator account and manipulate prices, temporarily crashing the market. After the ordeal was over, the hacker managed to steal 2,000 BTC.

In September 2011, a hacker was able to get read-write access to Mt. Gox’s database. The hacker created new accounts on the exchange, inflated user balances and was able to withdraw 77,500 BTC, after which they deleted most of the logs containing evidence of such transactions. In October 2011, a bug in Mark Karpeles’ new wallet software caused 2,609 BTC to be sent to an unspendable null key. The largest hack occurred at some point between September and October 2011 when a hacker was able to obtain a copy of Mt. Gox’s wallet.dat file and stole 630,000 BTC.

Web hosting provider Linode’s servers were hacked, granting access to the bitcoin stored on pioneering exchange Bitcoinica. The incidents ultimately led to the demise of Bitcoinica.

BitFloor was compromised when a hacker was able to access unencrypted backups of the exchange’s wallets and transfer out the coins.

Hackers were able to access Bitstamp’s hot wallet. As a result of the theft, Bitstamp began to keep 98 percent of its bitcoins in cold storage.

Attackers were able to exploit a vulnerability in the multisig wallet architecture of Bitfinex and blockchain security company BitGo.

Amount Lost: Approximately $190 million in BTC, ETH and CAD (at time of publication)

The co-founder of QuadrigaCX died on December 9, 2018, allegedly as the only one with access to the exchange’s keys. Evolving courtroom proceedings have revealed fund mismanagement and potential fraud on the part of the exchange. This has led to calls for greater oversight of exchange operations.

A cluster of hacks and mismanagement of funds by exchanges in 2018 occurred as the result of minimal regulation and security precautions. Consequently, some exchanges were forced to close operations entirely while others received fines.

On July 15, 2018, Coinrail resumed trading and offered the victims two compensation options: a gradual refund through the purchase of stolen cryptocurrency or compensation in Coinrail’s RAIL tokens, which could then be converted into another cryptocurrency at an inner rate.

The successful hack of BitHumb occurred shortly after the exchange updated its security systems following an earlier hack in 2017.

Hackers were able to gain control of a Bancor exchange wallet and transfer out funds.

Following this hack, authorities in Florence confiscated all of the cryptocurrency from the Italian exchange BitGrail to secure the claim of affected users, and the Nano Foundation promised to assist in the protection of interests and compensation for losses. Users accused the exchange of having lax security.

Little information was released about the MyBitcoin theft, however, many argue that operator Tom Williams ran it as a scam. The theft resulted in the closure of MyBitcoin, which was once a successful Bitcoin company in the cryptocurrency’s early days.

During a server restart, the remote Amazon service that housed Bitomat.pl’s wallet was wiped. No backups were kept and Mt. Gox later bailed Bitomat.pl out. Ultimately, neither exchange customers nor original owners suffered any loss from the incident.

In March 2015, Evolution Marketplace administrators “Kimble” and “Verto” were suspected of unexpectedly shutting down Evolution, a darknet marketplace that appeared after the seizure of Silk Road 2.0, and vanishing from the internet with all user funds.

Defcon, an administrator at underground marketplace Silk Road 2.0, noticed that funds held for the escrow service were stolen from a hot wallet in February 2014. “Transaction malleability,” an issue with the Bitcoin protocol at the time that also affected some other services, was blamed for the theft, though many suspect it was an inside job.

Total Value Of DeFi Doubles In Spite Of Crazy Fees