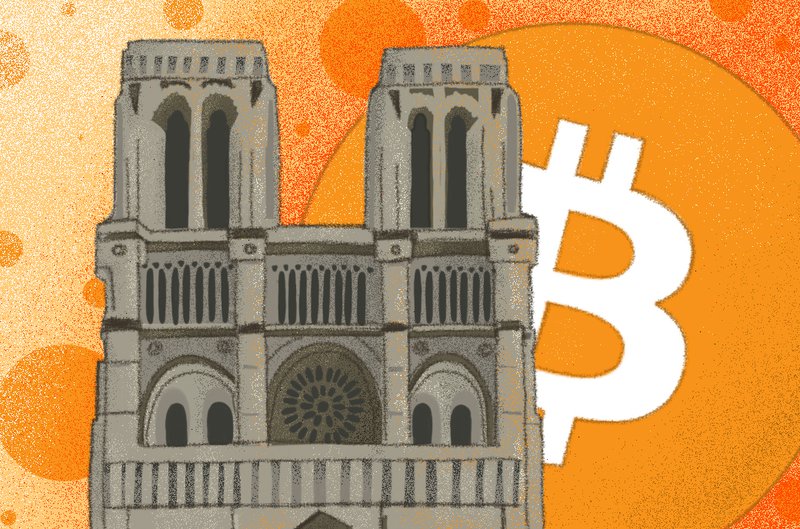 
The Bitcoin community has been contributing to a crowdfunding campaign to restore the famous Notre-Dame de Paris, which suffered a catastrophic fire on April 15, 2019.

During an ongoing renovation effort, the nearly 900-year-old cathedral experienced a colossal blaze due to what is currently believed to be a construction accident. The fire caused significant damage to the church, causing, amongst other damage, the building’s spire to collapse and the roof to burn away. However, the stone foundations are solid, most of the art was already moved off site for the aforementioned renovation work and some of the most famous stained glass windows have survived.
Before the fire, money was already spread thin over the potential reconstruction efforts, with the French government offering less than a third of the funds required for renovation.

Joining the outpouring of international support to address the fire damage, French economic journalist Grégory Raymond has called the crypto community to help with this task, setting up a wallet with several others to quickly accept donations for Notre-Dame’s reconstruction. Prioritizing the speed of getting the funds raised, the donation address does not currently have any verification beyond Raymond’s credentials as a recognized journalist for a major French publication. Still, as the fundraiser is less than a day old at the time of this writing, stronger security measures may be forthcoming.

The crypto community is no stranger to international campaigns of this sort, as one of the main advantages of a decentralized, peer-to-peer currency is its ability to circumvent the restrictions of governments and borders. Earlier this very month, even, bitcoiners worldwide funded the legal fees for Hodlonaut, creator of the Lightning Torch, after Craig Wright sued him for defamation.

This same spirit of generosity and borderless value distribution may be of great help to the venerable cathedral as well.