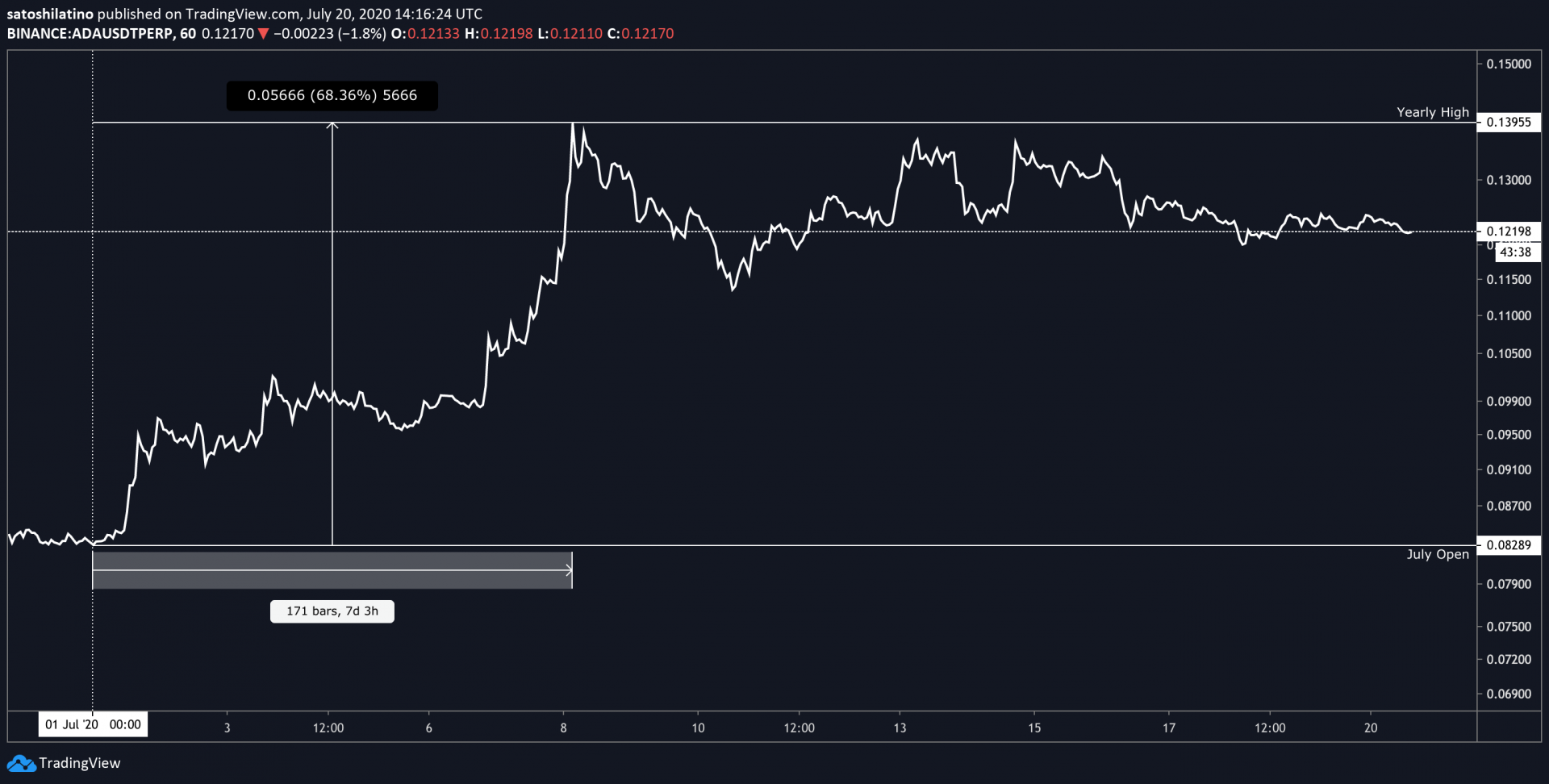 Cardano could be bound for a correction after the impressive bull run it has enjoyed since mid-March.

One of the so-called “Ethereum killers,” Cardano has decoupled from Bitcoin throughout the month of July. Since the first day of the month, the smart contracts token has seen its price rise by nearly 70%. It went from a monthly open of $0.083 to hit a new yearly high of $0.14.

The mounting buying pressure behind it seems to be fueled by the progress the IOHK team has made to finally roll-out the Shelley upgrade by the end of the month. But in what appears to be a “buy the rumor, sell the news” market behavior, Cardano seems poised to retrace.

A Massive Supply Barrier Ahead of Cardano

IntoTheBlock’s “In/Out of the Money Around Price” (IOMAP) model reveals that there is a massive supply barrier ahead of Cardano that may prevent it from advancing further. This on-chain metric shows that roughly 22,500 addresses had previously purchased 1.7 billion ADA between $0.123 and $0.126.

Such a significant area of supply may have the ability to hold and reject the price of Cardano in the event of an upswing. Holders within this range will likely try to break even in their long positions and encourage other investors to sell.

If this were to happen, a spike in the selling pressure behind this altcoin may rise and increase the odds for a steep correction.

Based on the IOMAP cohorts, there isn’t any considerable support level underneath Cardano that will prevent its price to decline towards $0.090. Here, approximately 56,600 addresses bought 3.32 billion ADA.

The considerable number of holders around this price level would likely do anything to prevent their tokens from going into the red and may even buy more ADA to help it rebound.

It is worth mentioning that from a technical perspective Cardano also seems to be bound for a correction. Based on its 3-day chart, the Tom Demark (TD) Sequential indicator recently presented a sell signal in the form of a green nine candlestick. The bearish formation estimates a one to four candlesticks correction of the beginning of a new downward countdown.

A red two candlestick trading below a preceding red one candle can serve as confirmation of the pessimistic outlook.

Nevertheless, the bullish view cannot be taken out of the question since the success of the Shelley hardfork could put Cardano back in the spotlight of the cryptocurrency market. Moving past the overhead resistance at $0.125 could propel ADA to retest the recent high of $0.14 and even reach higher highs.

Only time will tell whether or not demand for the so-called “Ethereum killer” will start rising again as more details are shared about the upcoming protocol upgrade.

Are Digital Assets and Blockchain Technology the Best Investment You Could Make in 2020?

The evolution of crypto exchanges — What’s next for the industry

Charted: Chainlink (LINK) is About to See “Liftoff” if It’s Able to Hold $13