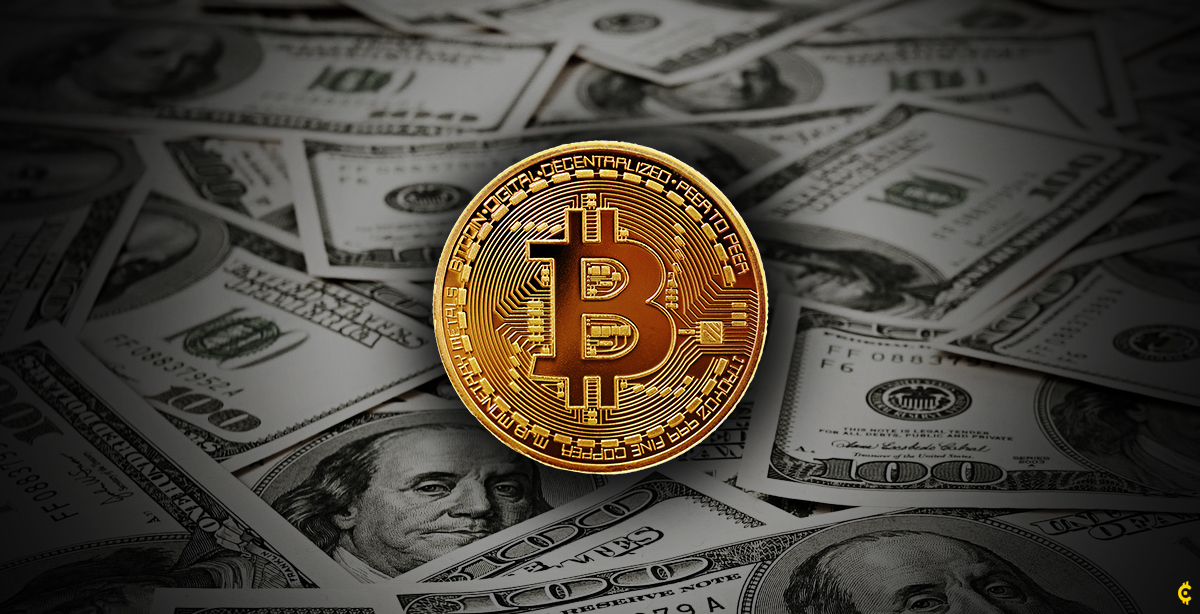 Regular readers of this column will know about the recent surge in African peer-to-peer bitcoin transactions, now at more than $12 million a week, according to Useful Tulips.

I think this, and similar patterns across other emerging market regions during the COVID-19 pandemic, reflect the most important cryptocurrency trend of the moment. We are a long way from mass adoption, but the circumstances driving this nascent demand in the developing world, not only for bitcoin but also for stablecoins and other cryptocurrencies, bring the human benefits of this new form of money into stark relief.

You’re reading Money Reimagined, a weekly look at the technological, economic and social events and trends that are redefining our relationship with money and transforming the global financial system. You can subscribe to this and all of CoinDesk’s newsletters here.

What’s driving this is a worldwide dollar shortage. For billions of non-Americans in places far from the United States’ now-unruly cities, the U.S. currency is a vital instrument in their daily lives. But it is now scarce. If you can’t get dollars and you don’t trust your local currency, bitcoin and stablecoins start to look attractive, either as a hedge against future inflation or as a payments or remittances solution.

Dollar shortages are the mirror image of the Fed’s “QE infinity” program and the reason it rapidly created swap lines with 16 central banks in industrialized countries in March. At that time, the pandemic had triggered a kind of global bank run into dollars. Debtors in European and Asian financial capitals who’d borrowed in dollars scrambled to buy them to cover margin calls on their collateral, which in turn sent investors racing to secure access to the same USD safe haven. As Jill Carlson wrote for CoinDesk, the Fed had no choice but to “turn on the taps” to feed the world’s demand.

Note some key words in that prior paragraph: “industrialized countries” and “financial capitals.” The Fed’s rescue mission might have stabilized global currency markets for now, but the Wall Street-centric structure of its policy implementation means the liquidity injections are far from evenly spread.

While quantitative easing has breathed life into U.S. stocks (see below), the shortages have persisted in many emerging markets, creating serious problems in their citizens’ lives. That’s especially so in many formally or informally “dollarized” countries, where mistrust of the local currency makes the dollar the preferred unit for business-to-business transactions, savings, and large-ticket consumer payments such as rent.

This is what’s happening in oil-exporting Nigeria, where the collapse in the price of crude has combined with the global dollar shortage to create a real USD crisis. It’s no wonder that Africa’s biggest economy is the biggest contributor to the pickup in the continent’s peer-to-peer bitcoin exchanges.

Consider also Venezuela. Nicolas Maduro’s dictatorship has unofficially abandoned constraints on dollar usage because an evaporation in the bolivar’s value has made it physically impossible for people to carry all the banknotes needed to buy groceries. Now, in the midst of the pandemic, home-bound Venezuelans can’t find the dollars they need. For some, bitcoin is offering a solution.

“USD bills are getting like a rare thing, like a collectible,” says journalist Javier Bastardo, who spoke to me from his electricity-challenged home in Caracas. “So, people are finding new ways to avoid the depreciation of the bolivar.”

One way, they are doing this, Bastardo said, is by “doing microtasks, connecting to a website where you can earn 10 satoshis (0.0000001 BTC) for doing different things.”

Yes, crowdsourced microtasking, by which companies get large numbers of people to collectively teach human intuition to machine-learning algorithms – think of those sign-on requests to identify traffic lights – is now a money-earner for people in the developing world. Developments in crypto technology have enabled this.

Previously, on-chain bitcoin fees – currently around $3 per transaction – were too high to sustain the kinds of micropayments made for these many small tasks. But advances in the layer two Lightning Network, which allows for secure off-chain transactions, now mean that sites such as Stak can affordably provide these money-earning services to their customers. Stak users in the Philippines and Argentina can earn enough satoshis to buy smartphones offered on the site.

Developing-country demand for bitcoin, however, still seems less based on its role as a payments vehicle than on its appeal as a gold-like speculative asset and store-of-value, an especially valuable proposition in places threatened by hyperinflation. What, though, of the challenge of day-to-day payments and remittances in dollar-scarce countries?

This is where stablecoins could be stepping up.

“What people want in Nigeria or in Venezuela isn’t really bitcoin but the U.S. dollar,” says Alejandro Machado, a colleague of Carlson’s at the Open Money Initiative. “So if you can have an asset that mimics or behaves like dollars perhaps we have a solution.”

For Machado, the solution doesn’t lie in Ethereum-based stablecoins like Tether, USDC or Dai, but in leveraging the liquidity that he says only bitcoin can provide. He co-founded Valiu for Venezuelans, which doesn’t create stability through a reserve model like Tether or USDC, or through a smart contract-based collateral system like Dai, but synthetically. Through a sophisticated strategy for trading and hedging bitcoin, Valiu offers access to a digitally executed contract whose value holds steady against the dollar.

These various solutions are landing in emerging markets that are, once again, reeling from problems that emanate from industrialized countries. Whether they’ll achieve mainstream usage rates remains to be seen. (The $8 million daily turnover for bitcoin trades in Nigeria, for example, although double that of two months ago, is a tiny drop within that country’s $420 billion economy.)

Still, there appears to be a clear and broad-based uptrend in demand. It speaks to what many of us have long argued: that the most obvious use cases for cryptocurrency lie in the developing world.

I think this, and similar patterns across other emerging market regions during the COVID-19 pandemic, reflect the most important cryptocurrency trend of the moment. We are a long way from mass adoption, but the circumstances driving this nascent demand in the developing world, not only for bitcoin but also for stablecoins and other cryptocurrencies, bring the human benefits of this new form of money into stark relief.

The Dow Jones Industrial Average, with its specially tailored selection of 30 important companies’ stocks, was designed by its founders as a snapshot of the American economy. It’s one reason why the performance of “the Dow” is often used as a proxy measure of U.S. prosperity, a rather simplified encapsulation of the American Dream. So it’s worth asking: how has this most famous of Wall Street indicators done over the past two weeks?

Between May 25, the Memorial Day holiday on which Minneapolis cop Derek Chauvin murdered George Floyd, and Thursday, June 4, the Dow gained 7.4%, marking the best 50-day performance for U.S. stocks ever. And now, after some surprisingly good unemployment numbers, they are up again as of Friday afternoon (by more than 930 points as of 5:48 p.m. UTC).

Let’s put this in context. Within the past nine trading days, millions swarmed into American cities to protest the unending injustice and racial inequality that this crime represented. There were violent responses from some members of the security forces and alarming acts of destruction and theft from some of the protesters. Meanwhile, as the nation’s political divisions were deepened by a President who seemed to want to fan the flames, the U.S. death toll from COVID-19 surpassed 100,000. Yet the stock market was up, CNBC pundits said, on hope of a stronger-than-expected economic recovery.

I have an alternative theory: investors know that the longer America is gripped by an existential crisis, the more money the Fed will pour into financial assets. I’m not sure how enriching hedge funds at this time will help overcome this country’s divisions. It will only underscore the failure of our financial system and the need for an alternative. It’s time for a new system.

KYCING OUR VIDEO CALLS Thanks to COVID-19 lockdowns, the world now lives on Zoom. So it’s no wonder eyebrows were raised when company CEO Eric Yuan this week said non-paying customers wouldn’t get privacy-protecting end-to-end encryption. Citing a presentation to investors this past week, Bloomberg’s Nico Grant reported Yuan as saying, “Free users for sure we don’t want to give that because we also want to work together with the FBI, with local law enforcement, in case some people use Zoom for a bad purpose.” There were understandable privacy concerns among the crypto community, though Abra CEO Bill Barhydt pointed out that Zoom, which currently has no ad model or other means of monetizing free users, could never afford the expensive exercise of encrypting everybody. What struck me, though, was how the arrangement made this information platform’s customer relationship look like that of a bank.  If you buy a Zoom subscription, it won’t be able to snoop on your calls, but it will know who you are. Sound familiar? Know-your-customer, or KYC, rules are the bedrock of how banks serve law enforcement’s efforts to catch money launderers. I suppose we shouldn’t be surprised: money is just a form of information anyway.

FORKING THE MEME Memes can be one of the most entertaining things on the internet… until you become one, of course. What started as a footnote in the larger protests surrounding the killing of George Floyd – a photo of a person whom we can only conclude is a bitcoin bro, or at least aspires to be one, held up a sign with the slogan “Bitcoin will save us” – became a cautionary tale. The image predictably went viral, drawing the ire of people inside and outside of the crypto community for pushing crypto gospel at precisely the wrong time.