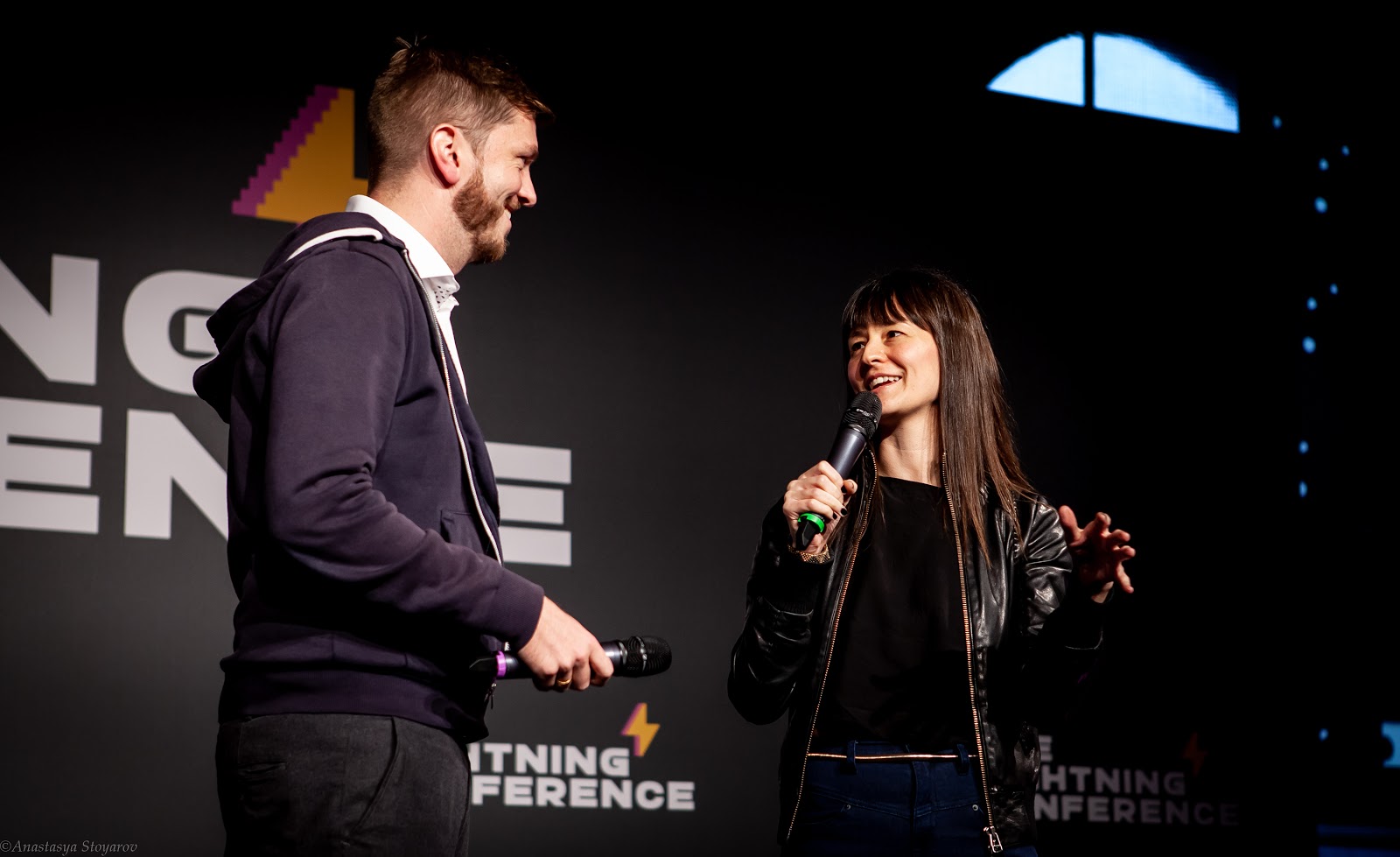 “There’s actually this class of trolls on Twitter that loves to troll me, and they love to say this thing about ‘18 months,’ where supposedly Lightning was supposed to be ready in 18 months,” Elizabeth Stark jokingly explained. “At one point I may have commented that a beta was gonna be out … and we actually did ship, by the way.”

Closing the first day of presentations, the Lightning Labs CEO shared her thoughts on the main stage with venture capitalist Jim Patterson. Seated in front of a large black banner reading “The Lightning Conference,” one of the pioneers of Bitcoin’s protocol layer for fast and cheap transactions addressed some of the concerns that critics like to tout on social media and internet forums. The Lightning Network isn’t being developed fast enough, the naysayers claim. Or perhaps it will never succeed in alleviating Bitcoin’s scaling challenges at all.

“Here, my philosophy is, well, we’re really in the beginning of this marathon,” Stark told an attentive audience in the central conference area. “We know about the challenges, and if anything, I think they are exciting problems to solve.”

It was February 2015 when Thaddeus (Tadge) Dryja and Joseph Poon published their white paper, “The Bitcoin Lightning Network: Scalable Off-Chain Instant Payments.” Seemingly out of nothing (and topping the authors’ own expectations), the proposal became a cornerstone in Bitcoin’s first big scaling war. Proponents saw it as one of the key solutions to enable more transactions without compromising Bitcoin’s decentralization and security. Opponents, in contrast, didn’t believe it would be ready in time — if ever.

But, as some predictions of Lightning’s timeframe proved too optimistic, skeptics took it as proof that they had been right all along. “Vaporware,” some commented. Or, even if working software should become available, the network would surely evolve into a hub-and-spoke model, which the fat cats of Blockstream (so some critics would warn) could leverage to make money off of relay fees.

It didn’t deter the builders. While usually working from across the globe, developers occasionally started gathering in person as well. The 2016 Scaling Bitcoin conference in Milan, for example, gave an opportunity to hold the first “Lightning Summit,” where about a dozen contributors discussed protocol standards. The second summit followed last year in Australia. And, since early 2018, the Fulmo team has been organizing several Lightning Hackdays — most of which have been in Berlin, probably the unofficial world capital of the hacker scene.

Now, the time had come to scale the hackday format up. A combined effort between volunteers from Fulmo, Lightning Labs and the broader Lightning community organized the first-ever Lightning Conference in an old army bakery building in the heart of Berlin.

Sticking to its hackday roots, the upper event floor — reachable through a gated staircase — featured big, dark wooden tables scattered with laptops, cables and Club Mate (a popular energy drink in Berliner hacker culture). Developers joined and left the tables throughout the weekend, learning to tinker with the Layer 2 technology from peers. Across the same hall, a row of desks stationed along the wall hosted an extravagant collection of Lightning-enabled toys, vending machines and other techy contraptions.

Between the main conference area and a secondary hall, two stages offered platforms to Lightning developers and enthusiasts who have come from all over the world to present and discuss their vision, their software implementations and Lightning applications (“LApps”) for this growing technology. Counting around 500 attendees, all areas were well attended at practically any point in the weekend.

Yet, despite a lot of buzzing enthusiasm, the focus of many of the talks wasn’t on how great the Lightning Network is. The focus is on what isn’t great about the Lightning Network — yet. The presenters spoke about what needs to be improved. Path finding (so payments can reach their destination) is still an issue. Channel liquidity is still an issue as well, as are channel management (including security challenges and reliable backups) and — more generally — user experience.

The challenges ahead are gladly embraced by some of Lightning’s critics, who typically favor alternative approaches to scaling. Many of them have shifted their energy and support to altcoins by now: Bitcoin Cash, Bitcoin SV or other cryptocurrencies with a primary focus on cheap and fast transactions. Some will even go so far as to bluntly call the Lightning Network a scam.

Outside the brownish-bricked building, in what is best described as the conference courtyard, the afternoon sun provided an uncharacteristically comfortable temperature for Berlin in late October. Enjoying some fresh air, Israeli Bitcoin developers Udi Wertheimer and Nadav Ivgi — well known in the Bitcoin development community — chuckled at the suggestion that the Lightning Network might end up being a scam.

“Who is even supposed to have been scammed?” Wertheimer wondered out loud. “The Lightning Network isn’t funded by some kind of opportunistic token sale. It’s just open-source developers working on projects to make it work.”

Indeed, the Lightning Network didn’t engage in any type of ICO — nor, as a public network that uses bitcoin, could it really have. Of course, some of the development teams working on the software implementations did raise millions of dollars from investors; in early October 2019, for example, ACINQ announced a funding round of $8 million. And truth be told, neither the Lightning Network nor the companies building it are guaranteed to succeed.

“But that’s money from venture capitalists — not from regular Bitcoin users,” Ivgi added. “Making risky investments is what VCs do. If it doesn’t work out for them, that’s part of the job.”

The after-party on the evening of Saturday, October 19, 2019 — an integral part of many conferences — took place in the lounge and garden of a hotel near the bridge connecting the Kreuzberg and Friedrichshain neighborhoods. It’s a short walk for those who’d later want to try their luck getting into one of Berlin’s iconic nightclubs. (Berliner doormen are renowned for refusing entry to anyone who appears unready for a long night of techno music.)

The evening was about halfway through as Rusty Russell joined the after-party, having made it to the conference all the way from Adelaide, Australia. Russell was the first person in the world to start working on the Lightning Network in an official capacity. Having written a series of blog posts attempting to translate the Lightning white paper into something more digestible, the Linux veteran began working for Blockstream in mid-2015 to make the technology real.

“The rapid growth of this community doesn’t surprise me, I’ve seen this before,” he said with a seasoned sense of excitement. By the time Russell first learned about the Lightning Network, he’d already gathered decades of free and open-source development experience: “This event reminds me of the early Linux days.”

In his talk on Saturday morning, Russell issued a word of warning about overselling the promise of Lightning, however. Where early Bitcoin proponents were a bit too optimistic about spreading the word of Bitcoin as a solution that would offer cheap payments forever, he expects Lightning Network fees to increase over time as well.

Yet, he is fully optimistic about the future.

“I don’t think the Lightning Network faces any unsolvable problems,” he said. “Conceptually, it all works out. What it needs now is hard work. And that hard work will get easier as we continue to move forward.”

Undeniably, progress is being made. Lightning Labs has just released lnd version 0.8.0, improving on security, routing and more. ACINQ is getting ready to launch its Phoenix wallet, which will make the user experience slicker than ever (users won’t even need to switch between on-chain and off-chain funds, as the user interface abstracts this away). The upcoming release of the popular Electrum bitcoin wallet will come with Lightning integration. Innovative proposals like Hyperloop could even benefit Bitcoin’s on-chain scaling challenges. The list goes on.

Lightning in The Room

But perhaps the best evidence of how far Lightning has come along was showcased at Room 77, the legendary cypherpunk-themed bar and perhaps the globally-recognized clubhouse of the Bitcoin community. As “The Room” is filled with live jazz music, cigarette smoke and excited chatter, a familiar ritual repeated as the conference crowd celebrated a successful weekend by ordering a round of beers: The bearded bartender pulled out a small device from behind him, not much bigger than a pack of cigarettes, pressed a button or two, and a QR-code popped up on the small attached screen. One mobile phone scan and a couple of seconds later, the transaction confirmed and drinks were paid for.

Yes, the technology is young, and much improvement still needs to happen. Just in recent months, a critical bug was found (and fixed) across implementations; a stark reminder that the technology is still somewhat experimental, and working out all its kinks and challenges will probably be a marathon indeed.

But throughout that Sunday night, in Room 77, Lightning worked.

Thanks to Martin Köppelmann for inspiring the headline.

Living on Bitcoin in Europe Day 3: Lightning Strikes in Berlin

Darknet Markets Can’t Live With — or Without —Bitcoin