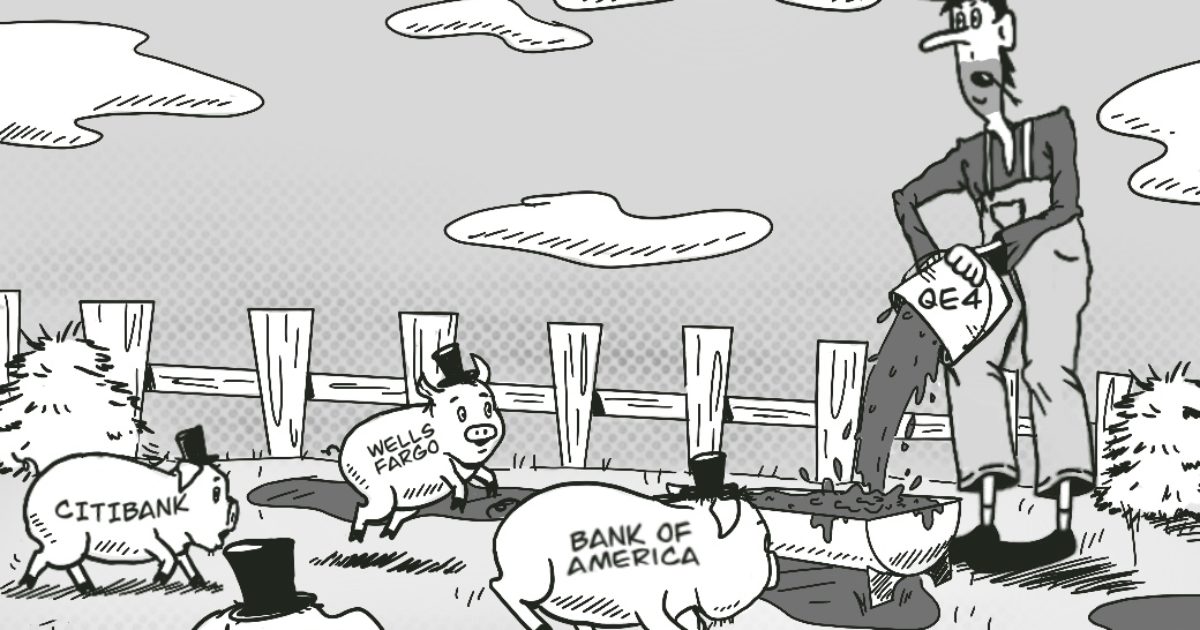 “Gradually and then suddenly.”

“Your ATMs are safe, your cash is safe. There’s enough cash in the financial system and there is an infinite amount of cash in the Federal Reserve.”

–Neel Kashkari, President of the Central Bank of Minneapolis

The Federal Reserve’s market activity is reaching a fever pitch.

In response to a market bloodletting that seems to precipitate new record losses every day, the Federal Reserve has responded to a somewhat unprecedented crisis with its most thorough market interventions since 2008.

Liquidity is drying up in the financial system, the economy is shutting down as COVID-19 arrests the global populace and the Fed’s only response at this point has been to pump cash into the system by buying up assets directly from banks and the Treasury, and lowering interest rates and reserve requirements to zero percent. If this fails to ballast the economy, negative interest rates may entrench themselves into our financial system (they’ve already arrived for Treasury Bonds).

The Federal Reserve’s market operations are ramping up by the day, and it’s using more tools simultaneously to “fix” markets than ever before. So what are these tools and how is the Fed using them? Where is this money coming from and where is it going?

Let’s get up to speed.

Despite some headlines and talking points that this crisis precipitated from the COVID-19 pandemic, the fact is, U.S. financial markets were suffering ailments of their own before this virus gripped the international stage.

They came in the form of repurchasing agreements, or repos for short. As I reported in September 2019, the Federal Reserve began open repo operations in response to rising interest rates in the overnight lending market; interest rates soared from the Fed’s target rate of 2 percent to as high as 10 percent.

Why did the rate rise above the Fed’s suggested, and usually closely followed, rate? Simple answer: There was a cash crunch and banks were reluctant to lend cash. The repo market finances short-term loans, with the maturity usually lasting a day, a week or two, or no longer than a month. Banks make these intraday loans to each other to cover their reserve requirements set by the Federal Reserve at the end of each business day. The Fed stepped in because banks weren’t lending to each other, so the banks with too little cash in the vaults didn’t have enough to cover their debts and obligations.

Cue the market operations that began in September and which continued until 2020, only to be revived by a new round of repo recently. From September 2019 to the end of 2020, the Fed financed $500 billion in repo operations. By March 12, 2020, the Fed announced it would conduct $1.5 trillion in repo. On March 20, 2020, it announced it would be offering $1 trillion in daily repo loans until the end of the month. That’s a trillion with 12 zeros, every day.

Now, this doesn’t mean that banks will be borrowing $1 trillion every day. But this limit is so large as to basically guarantee unfettered liquidity.

In my September coverage, I rhetorically asked if a limit exists. The Fed is showing us very clearly that one does not exist.

Repos are loans. The money that the Fed lends out in open repo operations, theoretically, is paid back under the agreed timeframe and banks must issue collateral to receive these loans. If the banks don’t pay back the loan, then the Fed keeps the collateral.

Since repos are basically loans and trillions of dollars in repos take place regularly in the bank-to-bank lending market, some would say the Fed’s operations represent business as usual, don’t have an outsized impact and aren’t the same as printing money.

Then there’s the counterargument that these repos are basically subsidies reserved for a financial elite. And, of course, even if the money is loaned and paid back, the cash has to come from somewhere. This is why you might hear folks call repo operations “QE-lite,” because the Fed has to purchase cash from the Treasury by purchasing bonds to finance the operations.

But QE-lite was not enough, apparently, so the Fed is going whole hog with QE4: its fourth quantitative easing action since 2008.

Quantitative easing, or QE, is the process by which a central bank prints new currency by expanding its balance sheet. In the U.S., the Fed prints cash and buys bonds from financial institutions to drive interest rates down. When you hear someone rave about the Fed printing money, this is what they mean.

The intended effect is to ease lending and boost spending. When the Federal Reserve prints fresh cash, it then buys up bonds and securities from banks and financial institutions for low rates to flood the system with liquidity. In 2008, this was done with 0.25 percent interest rates, which only rose to 2.5 percent again by 2018, in just enough time for it to come tumbling down again.

QE is the means by which the Fed controls this interest rate. Banks don’t have to comply with the Fed’s target rate (aka the fund rate), but why wouldn’t they? The Fed is guaranteeing cash at a certain interest rate, so Wall Street follows the lead and adjusts their own accordingly.

In this latest installment of QE, the Fed dropped the fund rate between 0 and 0.25 percent. In its announcement on March 15, 2020, the Fed promised $700 billion in fresh capital. On March 23, the Federal Reserve Open Market Committee (one of the Fed’s primary bodies that oversees market operations) announced that it would be opening the floodgates for ceaseless QE:

“The Federal Reserve will continue to purchase Treasury securities and agency mortgage-backed securities in the amounts needed to support smooth market functioning and effective transmission of monetary policy to broader financial conditions,” according to a press release at the time.

Once again, it’s clear that a limit does not exist. On top of this, the Fed also announced that it is indefinitely dropping reserve requirements to zero. This was in a bid to, as ever, stimulate spending and lending. Banks already held fractions of their deposits on hand; now they are required to hold nothing at all, and this coincides with shrinking daily withdrawal limits at major U.S. banks.

Proponents of QE will tell you that the system works; after all, it revived the economy after ’08, right? Look at how much the stock market boomed!

Indeed, and look, too, at the result: the worst Black Monday since 1987 and the U.S.’s major indices had three years of gains wiped out in a matter of weeks. This is the Ron Paul argument: that the Fed’s interventions are creating massive debt bubbles that precipitate ever-increasing disasters every decade or so. Ironically, the Fed was created to mitigate panics, but the anti-Fed argument, at least, has it that the Fed is creating more havoc than it resolves.

But even if you don’t buy that argument, it’s hard to side with the argument that QE creates salubrious or, at best, null effects. The usual, state-friendly talking point is as follows: Banks will buy the bonds back from the Fed when they reach maturity, and the Fed will either destroy this cash to annul the value created on the original loan or keep it for a rainy day. It all works out in the wash, so best not to worry, so to speak.

There’s a lot of “stuff” in the wash, though, and it’s becoming harder to keep track of all the debt and make sure everything is laundered properly. Indeed, the problem with QE is the unwinding phase — that is, ticking interest rates up slowly, easing the purchases of Treasury bonds until the Fed stops printing more money and buying these assets.

We saw this in action recently as the Fed’s balance sheet began to shrink in late 2017. It didn’t drop much — it went from the $4.5 trillion range in 2017 to below $3.8 trillion in August 2019 — this after it ripped from under $1 trillion in 2008 to the highs it set as a result of the Fed’s aggressive monetary policy following the Great Recession.

The unwinding that is meant to “reset” markets to pre-QE intervention is a fantasy. The weight of debt and obligations is simply too much; the market cannot return to equilibrium before the Fed has to rush to the rescue and provide easy liquidity once again.

With a fiscal stimulus promising checks to every American and bailouts to businesses all across the spectrum, the Federal Reserve will be working overtime for the foreseeable future. For now, the important thing to note is that central bank intervention is just beginning. The market was weak before COVID-19 compromised it further, and we likely won’t see the full economic impact of the virus for a few months as the ripples of layoffs and supply shocks rock the global economy.

The Fed will continue to print, governments will bail out businesses, and central banks around the world will inch their systems closer to modern monetary theory (but more on that later).

We are witnessing a paradigm shift in centrally planned governments; specifically, the groundwork that is being laid today will shape how governments and their monetary arms interact with a country’s populace and its economy. The trend is leaning toward strong interventionism and unrestrained control, especially in regards to managing money.

After all, the limit doesn’t exist. They’ve told us this themselves on national TV more than once, and I think the reality is finally setting in for the average citizen: just look at how popular the “Money printer go brrr” has become.

This is not by accident. Indeed, “money printer has gone brrr” for quite some time and will continue to go “brr” for some time more. Now, though, taxpayers are starting to hear it, some for the first time.

The louder it gets, the more they will question what it is and how it works.

Betting against Compound? This DeFi app just made it possible with COMP options