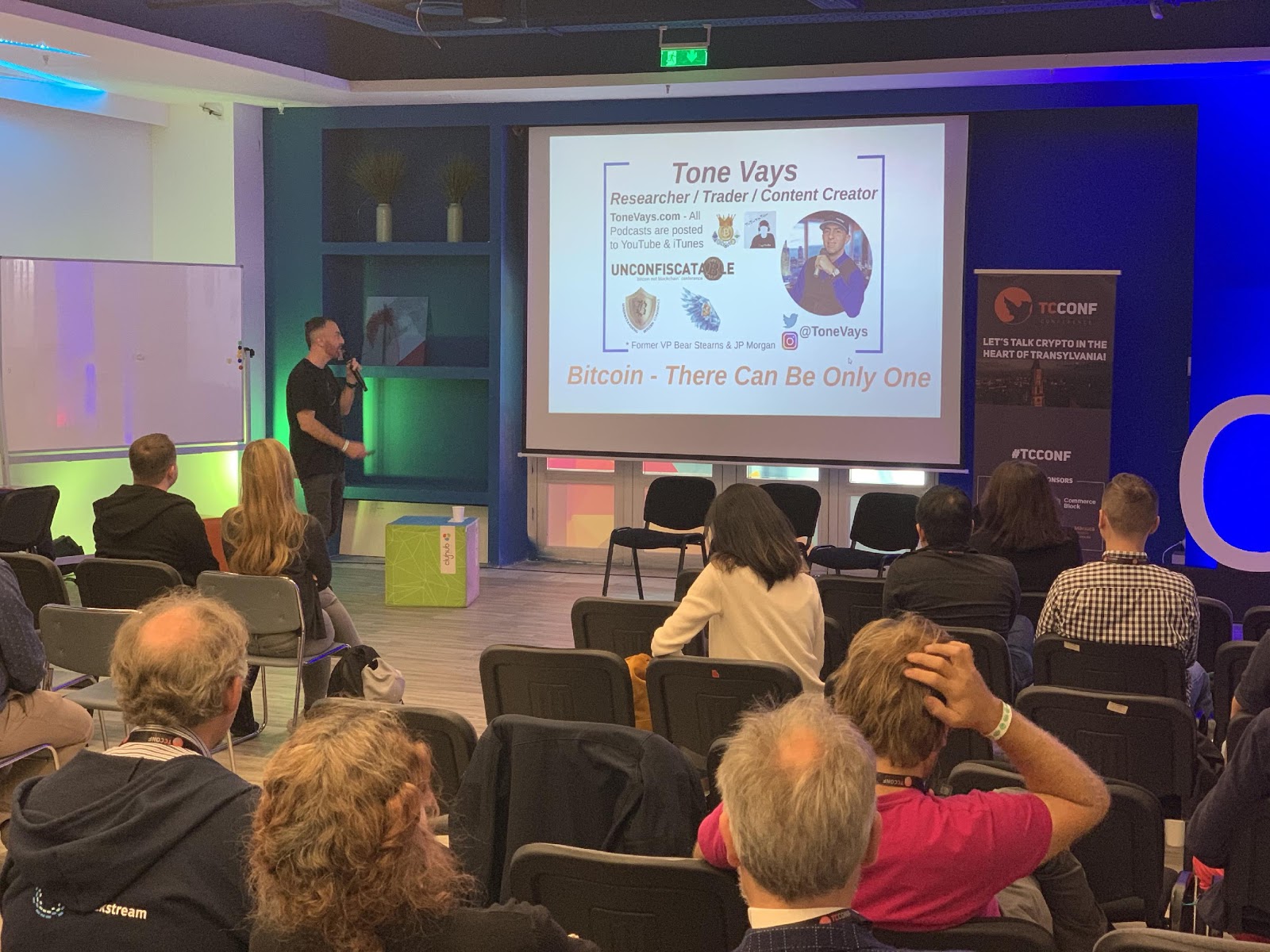 Bitcoin trader and advocate Tone Vays has been under a lot of scrutiny in October 2019. Between stirring controversy among community members for charging 0.3 BTC per hour for consultancy (which he later revealed as being his corporate service rate, which he set when the bitcoin price was $3,000 and forgot to change), agreeing to join a panel with Craig Wright just to defy his claims and making his tweets private due to incoming negativity, Vays can’t seem to catch a break.

However, during this exclusive interview which was shot at the Transylvania Crypto Conference in Cluj, Romania, just a week prior to his clash with Craig Wright, Vays was humble, candid and seemingly unaffected by the social media storm. He took time to explain his role in the Bitcoin space, justified his focus on education and evangelism, and offered insights on his understanding of Bitcoin regulation in the U.S.

Vays explained why his advocacy requires a revenue generation system.

“Unlike people like Roger Ver and some of the others, I didn’t get into Bitcoin early enough to have a bunch of BTC and not have to worry about money ever again,” Vays said. “So, unfortunately, I still have to make a little bit of a living while doing my Bitcoin evangelism.”

Furthermore, Vays’ content production and frequent conference participation doesn’t pay the bills either; rather, they bring in extra expenses.

“Conferences don’t exactly pay, my YouTube channel costs me more money to maintain than it brings in, my conference speaking and travelling costs me more money than it brings in, so I gotta finance all that somehow,” Vays explained. “I’m leveraging my skills as a trader to make enough money to keep doing what I’m doing — otherwise, I’ll go back to Wall Street and make hundreds of thousands of dollars, which is what I used to do.”

“I think TA is always relevant, but the right question is, ‘Is TA relevant for you?’”

Vays is one of the most vocal proponents of technical analysis (TA) in bitcoin, in spite of the asset’s low liquidity (as compared to other currencies and commodities) and high volatility. Though he openly acknowledges that some trades will bring in losses due to incorrect predictions, Vays presents TA as a “structure to be disciplined in your trades.”

During the fall of 2018 while the price of bitcoin was stagnating in the $6,500 area, Vays was the most popular bear, and he correctly called a new bottom in the $3,000s. His further prediction proved to be incorrect, as he expected prices below the $1,500 threshold; then the trend reversed and once again brought significant increases.

Going forward, Vays’ technical analysis still points toward bearish outcomes. However, he warns his followers to keep in mind that his expert opinion is not financial advice and that they should always do their own research prior to making any financial decisions.

“I don’t like the way bitcoin started rising early this year and I don’t like the way it topped at $14,000,” he said. “It’s now lost about a half of the value and I’m still uncomfortable with the current price as the low for this downturn. I give it a greater chance than 50 percent to go lower than $7,700.”

The bitcoin trader and evangelist also emphasized his role as an educator who encourages individuals to develop their own approach to technical analysis.

“I teach people how to trade so they don’t have to rely on my opinion and [can] make their own decisions,” Vays said.

Halfway through the interview, Vays made the distinction between fundamental analysis and TA: “If you are a big hedge fund, if you’re JP Morgan or Goldman Sachs, you’re not doing TA. You have the resources to do real fundamental analysis. You hire a person whose sole job is to research an asset for eight hours a day until a report is produced on that company or asset. An average person who may have a job or work as a full-time trader still doesn’t have the resources to do real fundamental analysis. Therefore, the question isn’t whether TA is the right choice — it is the only choice for an individual trader, whether full-time or part-time.”

Vays then issued a warning to those who may look at other people’s success stories but fail to see the risks of high volatility and possibly put the blame on price manipulation.

“If you trade a low-liquid asset like bitcoin and a guy with $10 billion can move the price, imagine what a guy can do for an altcoin,” he said. “If you’re scared that a whale can move the price, then you’re trading in the wrong market or you shouldn’t be trading. Everyone always claims that there is manipulation. Manipulation is just a move in the unexpected direction. If you complain about manipulation, go trade something else or don’t trade.”

“The tax law on bitcoin is terrible. The government needs to understand that bitcoin is used as currency for transactions and treat it just like foreign currencies.”

According to Vays, government regulations are necessary as a way of guaranteeing the same rules for all players on the market. Nonetheless, it’s hard for any piece of law to cover all the complexities of Bitcoin.

“In the crypto casino, you don’t know what kind of information the exchange is giving to certain players,” he said.

Vays expressed his willingness to work with the U.S. government in order to educate congressmen and specialized agency members about what Bitcoin is and how it works.

His motivation stems from the general tendency to consider Ethereum a decentralized project that is on par with Bitcoin.

“I would love to inform the government about what Bitcoin is and how it works,” Vays said. “I think they understand it, but at the same time I question it because of the way they perceive Ethereum. And the biggest thing on which I would like to educate the U.S. government is the difference between Bitcoin and Ethereum.”

Indeed, his presentation in Romania highlighted the reasons why bitcoin reigns supreme and every altcoin is doomed to fail.

Having a cushion which allows BTC holders not to be liable for taxes on gains under a certain threshold is also essential, according to Vays. In his view, bitcoin should be treated by U.S. regulators just like every other foreign currency.

“If I come back from Romania, I keep the currency in a drawer and it appreciates in value over time, then I don’t own any taxes because there’s a cushion there,” Vays explained. “But if I’m a trader and I deal with currencies, then I owe taxes on price appreciation. In the law, there is a difference between currency for commerce and currency for speculation. The IRS needs to give bitcoin a bit of a cushion — give it maybe $1,000 of a cushion for commerce use and stop making citizens worry about small amounts.”

In closing, Vays recommended all enthusiasts HODL for a longer amount of time. In his view, all of the legislative and economic issues will have been solved within a decade, so it’s better not to bother with today’s early regulation attempts.

“These frameworks are usually bad. Hold your own keys, buy some bitcoin, stash it for 10 years and then return when the world finally figures out what it is,” Vays suggested.

Video: Shift Cryptosecurity on Its Base Node and BitBox02 Wallet