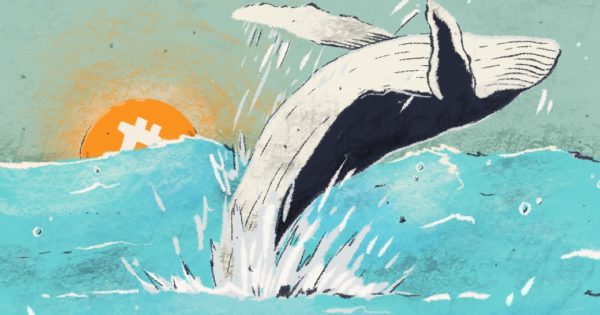 Was a Lone Whale Really Behind Bitcoin’s 2017 Bull Run? Don’t Bet on It

“Ignorance is the parent of fear.”

Their “findings” echoed through mainstream and cryptocurrency media alike. The duo boldly claimed that bitcoin’s 2017 price rise was fueled by unbacked USDT; in essence, their argument goes, Bitfinex/Tether issued the stablecoin without having any dollars in the bank to back them up, meaning bitcoin’s price rose on little more than hot air.

Now, Griffin and Shams are doubling down on these claims. In an updated report, they argue that, using tether as its tool, a single entity alone was responsible for the 2017 bull run.

“By mapping the blockchains of Bitcoin and Tether, we are able to establish that one large player on Bitfinex uses Tether to purchase large amounts of Bitcoin when prices are falling and following the printing of Tether,” the study reads.

As could be expected, as mainstream media outlets jumped on the findings, many voices inside the Bitcoin sphere have decried the report as insular and its methodology as flawed.

Plenty of market analysts, journalists and other commentators have had more than a year to chew over the academics’ prior findings.

Further Reading: Clearing Up Misconceptions: This Is How Tether Should (And Does) Work and Study Argues Tether Wasn’t Used to Prop Up Bitcoin’s Price

Alex Krüger, an independent economist and trader, addressed these claims in a concise Medium post.

“Some of the paper’s claims seem unwarranted,” he argued in his analysis, drawing the conclusion that the paper — which was published by the Social Sciences Research Network and didn’t undergo peer review, he pointed out — extrapolates too much.

Noting that tether issuance saw an uptick during a market downturn isn’t exactly groundbreaking analysis either. Less than proof of market manipulation, Krüger wrote, this is simply evidence that market participants are buying the dip.

“[O]bserving bitcoin purchases with USDT following market downturns is not extraordinary and is no proof of market manipulation,” the post reads. “Such purchases could be explained by demand from market participants, either for buying the dip or for arbitraging spreads across exchanges.”

Krüger declined to comment for this story. His comment on arbitrage is salient for the updated report, though, as Griffin and Shams’ new findings rest on evidence of mass tether flows between Bitfinex, Poloniex and Bittrex.

“[W]e find that one large player is associated with more than half of the exchange of Tether for Bitcoin at Bitfinex, suggesting that the distribution of Tether into the market is from a large player and not many different investors bringing cash to Bitfinex to purchase Tether,” the report’s updated finding reads.

Tether flowing from exchange to exchange is hardly a red flag, as it could simply be acts of price arbitrage, as Krüger’s initial post suggested. Still, arbitrage or not, this doesn’t allay the fear that these movements could be coming from a single actor.

“Is Bitcoin Really Un-Tethered?” relies on on-chain data, however, not individual account data. In the vein of efficiency, exchanges don’t manage individual wallets for each user; rather, they aggregate all user funds into a handful of wallets to make fund management less hectic.

Because the report either overlooks this (or ignores it), its reliance on on-chain data makes its findings tenuous, Coinmetrics co-founder Nic Carter told Bitcoin Magazine.

“I think the clustering and on-chain angle is quite weak,” Carter said. “The fact that a significant amount of value flowed through a single on-chain account does not really mean much. There are plenty of omnibus accounts for exchanges and market makers which map to a small cluster of addresses. There’s nothing sinister in that.”

Carter went on to provide an example of such single on-chain activity.

“[A] single entity on chain isn’t really that meaningful,” he continued. “In 2017, Coinbase did 90 percent of Ethereum transaction volume on-chain at times. Does that make them a single whale moving the price?”

Carter also took issue with the study’s sample selection. Griffin and Shams looked at all one-hour periods for bitcoin and tether movements on the blockchains from March 2017 to March 2018 and highlighted the most active on-chain movements during those periods, paying particular attention to the largest and most active bitcoin and tether wallets on the aforementioned exchanges.

From there, they concluded that the positive rate of return following spikes in on-chain activity point to manipulation, “simply because volatility and on-chain activity are highly correlated in the first place,” as Carter put it. He lambasted this methodology that purports to establish a causal relationship as “naive” and “not compelling,” seeing as “sometimes on-chain flows lead price, sometimes price catalyses on-chain activity (typically the latter is true).”

Methodology aside, a common criticism has been that the paper reads like an outsider’s take on an industry they’ve had little interaction with.

Anil Lulla, the co-founder of crypto analytics service Delphi Digital, for example, sees these findings as an attempt to shoehorn data into a thesis that shows a fundamental misunderstanding of how bitcoin’s markets operate.

“This paper gaining traction across popular media outlets goes to show just how misunderstood Bitcoin and the crypto space still is to the general public. Personally, it seems like the authors simply looked for data to help support their thesis,” he told Bitcoin Magazine.

It also overlooked retail investment during 2017’s market mania. Altana Digital CIO Alistair Milne, for instance, has charted Coinbase’s growth here and found that it added roughly 8.4 million customers in the course of 2017. This translated to at least 100,000 per day during the bull run’s fever pitch.

And this wasn’t just with Coinbase. An eToro market analyst told Bitcoin Magazine that the crypto-focused financial services company experienced meteoric demand from retail investors during 2017, as well.

“Everyone who witnessed the 2017 bull run emphatically knows that it was caused by a global wave of mass awareness, particularly in the retail sector,” the analyst said. “At eToro, I personally witnessed the effects of millions of new clients joining to trade crypto, and how every site that offered or even mentioned crypto or blockchain was flooded with attention. The rally was not caused by anyone, it was caused by everyone. Tens of millions of people at the same time, all getting excited about the endless potential of a new industry being born.”

There are counterpoints still, such as Elaine Ou’s observation that, due to the Chinese government’s strict attitude toward bitcoin and the banking issues this creates, “that Tether was used in 99% of Bitcoin spot trades in China this year, accounting for 60% of all on-chain transaction value.”

In the same article, Ou called the findings “silly.” Given the report’s obsession with a singular whale as the driving force behind the bitcoin’s market success, perhaps the proper response to this study should take its cue from Melville’s Captain Ahab when facing the great white whale.

“I know not all that may be coming, but be it what it will, I’ll go to it laughing.”

Half of all Stellar Lumens are Gone Forever

MACRO INVESTOR: BITCOIN WILL BE THE BEST PERFORMING ASSET OVER THE NEXT 2 YEARS

Verge (XVG) — a Complicated Story with an Interesting Perspective