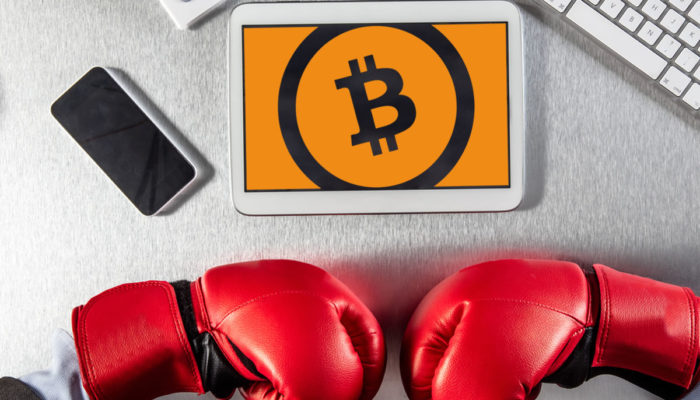 The long-awaited action finally took place. Yesterday the market saw how the price of Bitcoin made a big leap. The big question is of course: does this rally last and what can we expect in the coming weeks? I have been reasonably positive in recent weeks and am now – even after the action of yesterday – even more. Nevertheless, important terrain must be won in the coming days and the biggest battle will be for the 50 ema. Also known as the 50-day exponential moving average. This is the resistance to be crushed with confidence if we want to continue yesterday’s price jump in a rally that may last for several weeks. Let’s look directly at the daily graph of Bitcoin (image 1), because here it is clear to see how the 50 ema (blue line) formed a true wall and where the price of Bitcoin was strongly upset yesterday. Smart traders had strategic sell orders at this level and that is not for nothing. The trend is still bearish and the 50 ema is not broken without a struggle. 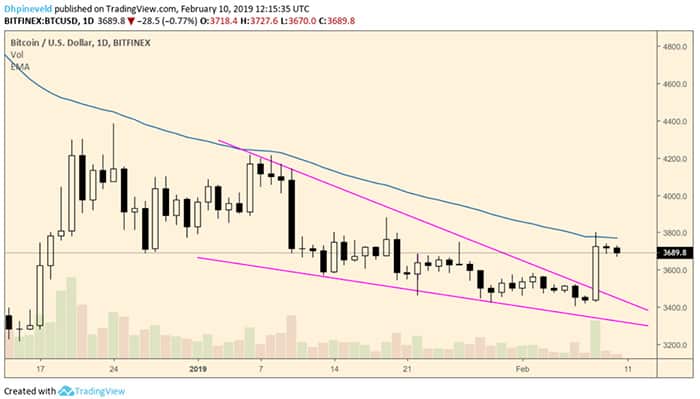 The falling wedge appears to be a reliable bullish pattern once again and on figure 1 it is easy to see what kind of action takes place if such a pattern is broken. At the same time, the same can be said of the 50 ema. During the entire bear trend of last year, the 50 ema proved to be an important resistance that is difficult to break. Although we briefly broke this resistance a few times, the rate nevertheless dropped again each time the next re-test of this level. If we want to break the current trend and want to provide the basis for a new bull run, we now have to break the 50 ema first and survive the re-test of this level. Litecoin (LTC) (image 2) already preceded us as many people know, but Bitcoin and almost all other cryptos still hit their heads a lot. 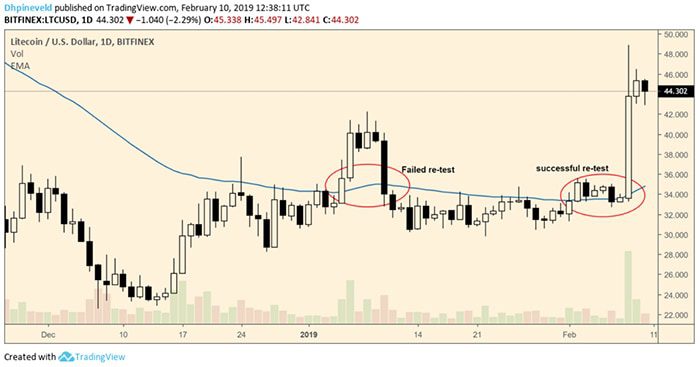 Litecoin broke the 50 ema in January, but did not know how to hold it. Subsequently, the 50 ema formed a strong resistance again, but when the rate initially broke through this level at the beginning of February and a successful re-test of this level took place, the price exploded.

In addition to Bitcoin, you can also see that Monero (XMR) (figure 3) and Ethereum (ETH) (image 4), for example, have trouble breaking the 50 ema, but also because if a hard-to-break resistance is broken, this will be motivation for the bulls. Something that this market really needs! 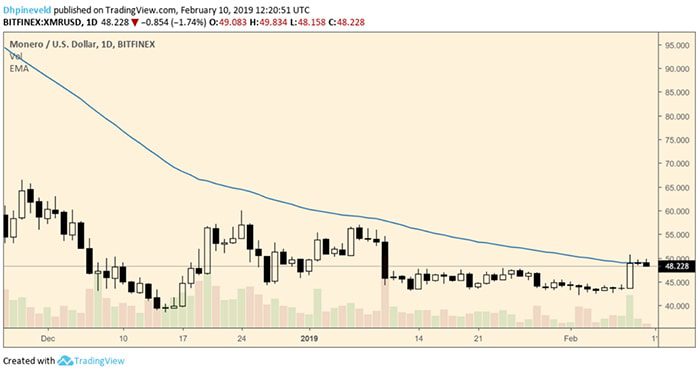 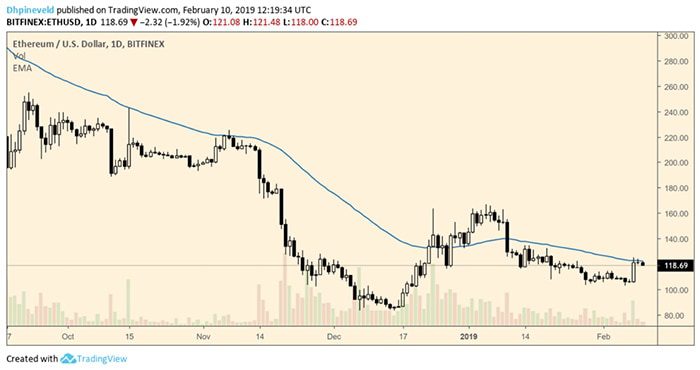 The coming week will thus be in the frame of this level. Are we going to break the 50 ema or not? Personally, I am confident because the momentum is good and the graphs look positive. As a result of the action, there is a strong bullish engulfing on the weekly chart and the momentum indicators are all bullish with a lot of space. We are far from overbought territory on the charts with longer time frames and that is a good basis. The MACD on the weekly chart is about to roll bullish and has already done so on the daily chart. All in all, the basis is there, but the work still has to be done! In addition, the break by the 50 ema is not nearly as important as the re-test of this level. I think the chance of breaking the 50 ema the next week or week afterwards is very big but the re-test is what it will do. Then we find out whether there is actual underlying force and whether a foundation has been formed for a new rally. The 50 ema currently corresponds approximately to a price of $ 3,800 on Bitfinex. My eyes are focused on that and there the fight is taking place now. If we break the $ 3,800 the next resistance is around $ 4,200, but let’s not anticipate things and first see how Bitcoin’s share of the current fight comes. It will be an exciting week!

Bitcoin is the answer to global economic instability

Bloomberg Analysts: Bitcoin at $50K as Total Crypto Market Cap to Grow to $1 Trillion in 2021

NYDIG Custodies Over $1 Billion in Bitcoin and Cryptocurrency

Bitcoin Taproot Upgrade Goes Live, What It Brings to Bitcoin?