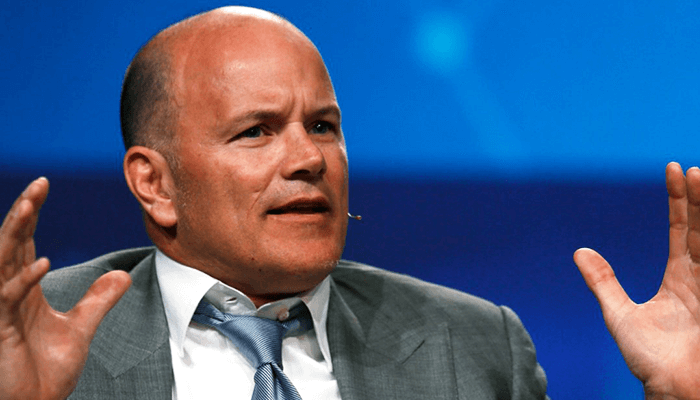 Mike Novogratz: market is finding a bottom, next step is up

Michael Novogratz, founder of Galaxy Digital and well-known bitcoin (BTC) bull, tweet on March 18 that he predicts a bottom for the cryptocurrency market and that the next step is up.
Using a poll on Twitter, Changpeng Zhao, CEO of cryptocurrency-exchange Binance, asked whether people think the cryptocurrency-market is currently in a bull market or in a bear market.
More than 32,400 people voted in the poll. 36% indicate that crypto is in a bull market and 64% indicate that we are dealing with a bear market. Mike Novogratz also gave his opinion on Twitter:

The Twitter message shows that Novogratz sees a horizontal price trend, believes that the market is finding a bottom and that the next step is a positive outbreak.
The price of bitcoin has gradually fought for $ 4,000 in 2019. The value of BTC is $ 4,054 at the time of writing, a 0.75% growth in the last 24 hours. So a bottom around $ 4,000 for bitcoin is not a far-fetched prediction.
That said, Novogratz is regularly bullish about bitcoin. Last September he also saw a bottom for crypto prices and he expected the BTC price to rise to $ 10,000 before the end of the year.
He withdrew this prediction when the crypto winter started and the price of bitcoin continued to fall. Nevertheless, he stated several times last year that in 2019 he will see bitcoin rise past $ 9,000 or even $ 10,000.
This year, in February, Novogratz was also positive about bitcoin. The former hedge fund manager then called bitcoin the digital gold for traditional investors.
Tom Lee, co-founder of Fundstrat Global, recently predicted that the price of bitcoin would go to $ 10,000 or even $ 20,000.
Changpeng Zhao said last month that he does not expect a bitcoin exchange-traded fund (ETF) to be important for the growth of bitcoin.

4 Interesting Litecoin Developments you Should Know About