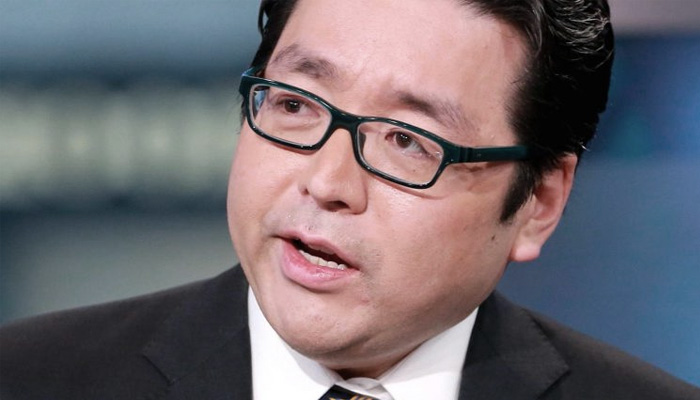 After the new bullrun that emerged last Tuesday, many analysts and traders dare to look up again. This is also the case with Tom Lee, co-founder of Fundstrat. During an interview on CNBC, he discussed what he thinks is a reasonable value for bitcoin (BTC).

During the interview, Lee emphasized that 2018 was a bad year for bitcoin. With institutional investors who decided not to enter the market yet, investors who closed their positions and startups that went bankrupt, BTC plunged down. However, it looks like 2019 will be a lot better.
Even for the current bullrun, bitcoin was already worth 11% more than at the start of 2018. In addition, whale wallets are starting to buy bitcoins again. In short, “many positive things are happening right now,” Lee said during the interview with CNBC.

In the end, Lee said that “$ 14,000 is a reasonable price for bitcoin,” and he explained how he got that price. For example, the value of bitcoin would have been 2.5 times the mining costs for much of its existence. And according to Lee, those costs are around $ 5,500 right now.In addition, companies such as Fidelity are starting to launch investment products for institutional investors. This type of investor often invests with large sums of money, and places high demands on the security of the platforms on which they make these investments. Until recently, the only way to invest in bitcoin was through cryptocurrency exchanges. In view of the hacks that these exchanges occasionally hit, institutional investors stay away from these platforms.
Bitcoin can also benefit from the situations in Venezuela and the United Kingdom. Where a national fiat currency decreases in value, or runs the risk of decreasing in value, many people use bitcoin. That way they can limit the damage as bitcoin often retains its value better in such cases.

It is not surprising that Tom Lee makes a positive prediction. He had previously predicted that bitcoin could be worth $ 250,000, later he adjusted that down to $ 20,000.